Albert Zubaida was a 17-year-old Jew in Baghdad during the worst persecution of the Saddam Hussein era following the Six-Day War. He told the hair-raising story of his escape from Iraq - he had vowed to his 85-year-old grandmother he would not travel without her  - at a briefing on Jewish refugees at Westminster in March 2014. Here is a summary of the transcript. (The full transcript of the event is available to members of the Henry Jackson Society. ) 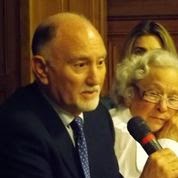 I was born in Baghdad, my ancestors came from Jerusalem, some 2,600 years ago. They were taken as prisoners by Nebuchadnezzar and taken in to Babylon, and rebuilt Babylon.

The situation deteriorated so rapidly in 1967, after the war between the Arabs and Israelis, and I vividly remember that the president, or someone prominent in the Iraqi government, took it upon himself to rid Iraq of ‘traitors and spies.’ And, sure enough, within a few days, people started disappearing from the streets, having been arrested.

New rules came up within a few days; Jews could not work; if anyone employed a Jew, his business would be closed; telephone lines to Jewish homes were cut off; Jewish youngsters no longer were accepted in university; all travel outside of Baghdad, in a five-mile radius, was prohibited; if any person sold a property, he could not take the money, but had to leave it in the bank; passports had suspended for Jews in 1964, so no one could leave the country legally.

Within a few days of the 1967 war, there was a blackout; the government decided to switch off the lights at night, as they were worried in case Israel bombed Baghdad. I remember very well that one evening we had a knock on the door, my mum went to the window to see what was happening; there were a few policemen outside, and they asked her to open the door. She let one of the officers in, and he said, ‘don’t you know there’s a blackout? You left one of the lights in one of the bedrooms on’. She apologised, and he left.

By the time she went to the bedroom, my father had had a massive heart attack from fright and we couldn’t ask a doctor to come as that day our telephone line had been cut off. By the morning he was deteriorating. We were worried to take him to hospital, because in 1941 (during the Farhud pogrom - ed) Jews were injected and killed in hospitals. Sadly, my father died within two weeks, at the age of 58.

At the beginning of 1969 – everyone knows about nine Jews being hanged in Baghdad, in the main square – well, as two Jewish boys we were going to school in the morning, the driver on the bus said, ‘why don’t you go down and go back home’. So we went back home, and when we got back home we figured out what happened with the situation. Two of my uncles were in prison at the time, with another 30 men and we didn’t know what their fate was to be.

When leaving school in Baghdad, every boy needed to have documentation for the army, and normally they stamp it with ‘not suitable for army service, for medical reasons’. And I used to go to the ministry every ten days for a mark, during the heat of the day, waiting from 8 o’clock in the morning until 2 o’clock in the afternoon just to get my document stamped. Meanwhile my father’s friend appears who was in the jewellery trade, which I used to go and practice, I was good at making things, so I made my own stamp and gave myself six months leave.

[Laughter] At that time I had promised my grandmother, who was living with us, to take her with me, and she took the offer. She was about 85, quite big, she can’t see well, and it took me six months to manage to take her, to find a smuggler willing to take us. We had to cross the border on mules and horses, so the smuggler took us in a Land Rover from Baghdad to the border [to Iran], and then I had to stand with my little suitcase and handkerchief opened, as a sign for the smuggler to approach. He came and we followed the track to his horse until the evening when he got a Land Rover, he put us in and covered us with canvas.

I had, at that time, stuffed my shoes with dollars. We had to pass through five army checkpoints, and each time I was really sweating in case we got caught. It took us about two miles to reach this point until the Land Rover could go no more. So, the chap took us in the middle of the night and said, ‘why don’t you wait here and I’ll get some horses and mules to come pick you up’, so I begged him to keep one person with us or he might just leave us stranded on the mountain; he did. He went and he got the horse and mules, put my grandmother on, tied her up, and we proceeded.

After a couple of hours, we got to a small stream and he said that this was the frontier between Iraq and Iran. As soon as we crossed it, we were surrounded by army personnel, but when they came near us they were Iranians. And I told them we wanted political asylum, they said that was fine and brought an Army jeep to put us in, and took us to a frontier hotel. The next morning we had to go to the police station to register. They brought us teas and coffees, and what have you.

His accent, and his language, was so pure Baghdadi that I thought we hadn’t even crossed the border. So I asked him to take us to Tehran, about eight hours inland, and he said, ‘Fine, no problem’.

I got the doctor in Tehran to look at my grandmother, and he said that she was fine and had nothing wrong with her; he gave her some medication and within a couple of days we had a couple of people from the Israeli embassy who had information that we had crossed the border. I took her to Israel, she lived for two years, but had cancer, but I took all around – to the Kotel and everywhere, and I then got myself to England.

Link to transcript summary here
Posted by bataween at Friday, May 23, 2014