Auction houses in the West  may using exaggerated reports of the destruction of Jewish holy sites in order to make a mint on the sale of Judaica. Adam Blitz investigates in the Times of Israel: 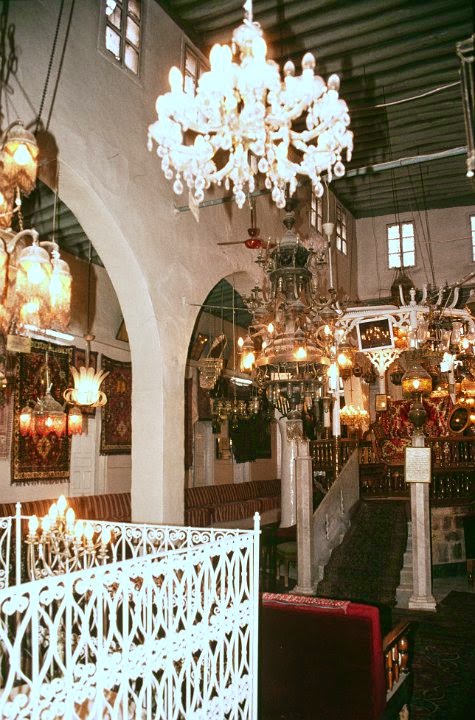 The Jobar synagogue near Damascus: contrary to some claims it is neither Syria's oldest nor has it been destroyed (Photo: Christopher Knoch)

On 17 December 2013 Sotheby’s (New York) commenced its Important Judaica sale. To be auctioned was “An Exceedingly Rare Hebrew Synagogue Carving” (Lot 93). Sotheby’s catalogue states that the object was made of Walnut and incised with seven words from Psalm 19 verse 9 framed by an ebony border and inlaid with bone.

The item (below) was perceived to be a door to a (Torah) Ark: the Aron ha Kodesh or Hechal , the ornamental cupboard within a synagogue in which the sacred scrolls were housed. Provenance was ascribed to Jobar, Syria’s much beleaguered synagogue of late, two kilometres North East of Damascus.

The Catalogue Note was both explicit and ambiguous. It stated that the carving originated circa the 11th Century and was unequivocal in that the synagogue of Jobar was at least 2,000 years old. The reader, or rather the bidder, was informed that Jobar was “once the most important Jewish pilgrimage sites in Syria” and that the synagogue “ha[d] since been totally destroyed”. The object may in fact have been “all that remains of this ancient and venerable [Jewish] community”, we were similarly told.

Yet the same entry was also vague. Sotheby’s associated the carving with another item: an Ark door from the Ben Ezra Synagogue in Cairo . And to this extent the auctioneers directed the public to the Walters-Yeshiva University exhibition, “Threshold to the Sacred: the Ark of Cairo’s Ben Ezra Synagogue ”. However it was unclear from Sotheby’s Catalogue Note whether its object of comparison was a non-extant Ark door (which bore the same Hebrew text and discernible only from photographic evidence [4]) or an actual Ark door. One such door was on display in New York City at the time of publication.

This was not the first time the carving had been sold on the open market. In July of 2011 the Israeli auction house Kedem listed the object as part of its Judaica Auction. No. 16. On that occasion the original estimate was $5,000 US dollars.