'Jews' implicated in mine disaster 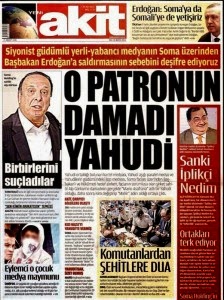 Just when you thought Turkey’s antisemitic government had gone far enough, it sinks to a new low - associating Jews with the recent Soma mine disaster. Report in the Algemeiner:

The paper blasted its distaste for Jews with a headline that criticized the mine’s owner for having a Jewish son-in-law and ”Zionist-dominated media” for distorting the story.

Hurriyet said Yeni Akit ”has a long track record of anti-Semitic slurs” and noted the front page wording used to describe Alp Gürkan, the mine’s owner, for “giving his daughter to a Jew,” which it implied to be the main reason why the “Zionist-dominated domestic and foreign media” was “attacking Turkish Prime Minister Recep Tayyip Erdoğan,” to “distort” the truth behind the disaster.

“While the cartel media in cooperation with Jews, Jew-lover parallel media and Jew controlled western media targets the Prime Minister over the Soma disaster, it is revealed that the groom of Alp Gürkan, owner of the company responsible for the disaster, is a Jew named ‘Mario Asafrana’ who changed his name and is now called ‘Mahir’,” the paper wrote.

How it feels to be 'Israeli spawn' by Haymi Behar (Hurriyet)
Posted by bataween at Wednesday, May 21, 2014

"Jews implicated in mine disaster" is not a good title. Too many people don't go past a title to draw conclusions.
The title should reflect that it is a conspiracy theory cooked up by a Turkish antisemitic newspaper based on the fact that the owner's son-in-law's name is Asafrani, which is an Arabic name shared by Jews Muslims and Christians.

'Jews' now in quotes, Sylvia. Should really be 'Jooz'

This is what the Muslim world really thinks about us. We are implicated in every disaster that befalls them. Why are we shocked about these headlines? I'm only shocked by headlines that paint us in a positive light.