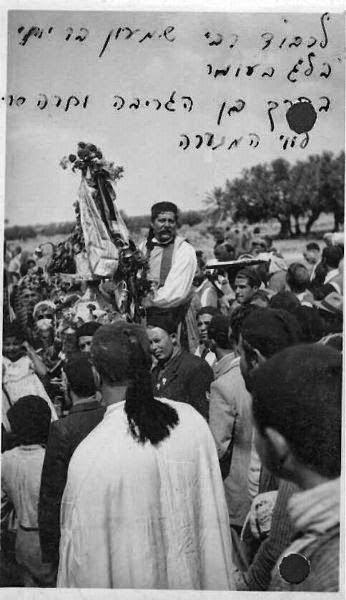 Some 1, 500 visitors - up on last year's tally, but way down on previous years when the site could expect to draw 10, 000 - attended the Al-Ghriba Lag Ba'omer pilgrimage on the Tunisian island of Djerba this year. At the last minute, the Tunisian government quashed a challenge from the dominant Islamists in the parliament to ban Israeli passport-holders. But the damage, opines Claude Sitbon in the article below, was done:

Pilgrims were crowding into the sanctuary, votive candles were glowing under the arches, and a singer from Jerusalem named Moshe Giat was atop a low bench, leading the men in an old and rousing song that ended, “Hear, O Israel!”

Jerusalem? No. This scene took place in Tunisia, where about a thousand Jews are gathered this weekend for an annual Jewish pilgrimage and festival on the island of Djerba. The presence of Israeli visitors like Mr. Giat has become the focus of a sharp controversy among Tunisia’s political leaders.

On May 9, legislators at a raucous parliamentary hearing cited support for the Palestinian cause, opposition to Israel, and Israeli attacks on PLO figures in Tunisia in the 1980’s as grounds for removing two government ministers and reversing a recent decision to formalize procedures for Israelis visiting Tunisia, which does not have diplomatic relations with Israel. The government says the move will boost Tunisia’s struggling tourism industry by projecting a message of openness.

The polemic is quintessentially Tunisian, combining fears for an economy battered by the country’s 2011 revolution, evocations of the Arab world’s most enduring cause célèbre, and the tumultuous politics of an emerging democracy. For Tunisians, it’s also an occasion to weigh their country’s priorities.

Claude Sitbon, a consultant to the 1993 pilgrimage,  offers this analysis for iNews 24:

(...)  do the Islamists know - as an expert on the Middle East conflict said - "that Egypt, despite its revolution and even with the rise to power of the Muslim Brotherhood, has not even considered changing the peace treaty with Israel”? I was reminded of what a Palestinian minister told me once, that "foreign pro-Palestinians, with their extremism, do extreme harm to the Palestinian cause."

This appears an apt remark given that 80 members of the Constituent Assembly met in closed session recently to try and condemn the Minister of Tourism for his policy on Israeli tourists - and have mostly caused grave damage to Tunisia.
Israel is, without doubt, the most taboo name in Tunisia. To be more precise, I will make a distinction between those who have known the Jewish community and others, generally much younger, who are unaware that the Jews of Tunisia can trace their history to the time of Queen Dido of Carthage.

So concerned were the organizers about an Israeli presence at the pilgrimage, that they announced that participants would only be coming from France, Italy and Canada - even as AFP reported on the presence of Israelis in Djerba. President Bourguiba, who said at the time that "the non-recognition of Israel is a sham," must be turning over in his grave at hearing this debate, as barren as it is useless, affecting the image of Tunisia which he so wanted to be pluralistic.

The first visit by Israelis to their former homeland took place in December 1993. Invited as a consultant, I can attest that it was a special trip with a warm welcome and a police escort - visible and invisible - to ensure our safety. That trip undoubtedly paved the way for the annual Israeli pilgrimages to Djerba, which drew tens of thousands of participants.

At first, the Israelis received a special "flying visa" for their visit, but a few years later they were treated like all other tourists and had their passports marked with a Tunisian stamp. The flow of Israeli tourists did not stop, despite the closure of the Israeli diplomatic mission in Tunis, which was established in 1996 but closed down as a result of the second Palestinian intifada in the year 2000.

Against all odds, in 2011, the year of the "Tunisian Spring," the year when hopes of freedom and democracy were high, Tunisian authorities announced that for security reasons the pilgrimage would not take place. is it possible that the security of the Jewish pilgrims cannot be guaranteed in such a
small area? It was perhaps the beginning of the politics of the Ennahda party.

I can only hope that the many men of peace in Tunisia are able to recapture the spirit of Pierre Mendès France and Bourguiba, who spoke of the "free movement of people."

o/t
renovating the synagogue in Beirut