Why do the Arabs oppose a Jewish state? 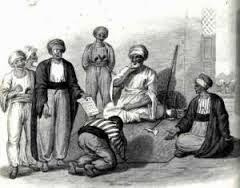 The dhimmis were 'at the bottom of the barrel'


The root of Arab rejection to recognising Israel as a Jewish state lies in the  'dhimmi' view of non-Muslims as a religious group worthy of contempt, not a nation, explains PoNR reader and blogger Eliyahu miTsiyon in the Jewish Press. Yet the Quran and some medieval Arab historiography did recognise Jewish peoplehood.

The explanation for the Arab position lies, I believe, in the traditional Arab-Muslim view of Jews as an inferior dhimmi people, a millet [see below] devoid of national rights, and only entitled to live if they pay a yearly head tax on dhimmis called the jizya. The dhimma system applied to all non-Muslims who were subjects of the Islamic state, with individual exceptions. Within this system, the Jews were at the bottom of the barrel, at least in the Fertile Crescent countries, including the Levant, where the Jews’ status was inferior to that of their fellow dhimmis, the Christians.

Whereas the Quran and medieval Arab historiography, such as the the writings of Ibn Khaldun, recognize the Jews as a nation or people, the entrenched Islamic view of Jews as an evil, inferior contemptible millet is now dominant. Moreover, in fact, in practice, that was the actual status of Jews in the Arab-Muslim countries for centuries. Even today in the 21st century Muslims believe that Jews do not deserve the dignity of having a national state of their own, the Quran and the old Arab historians notwithstanding.

This contemptuous view of Jews is clearly stated by the PLO in its charter. Article 20, already denies that the Jews are a people, claiming that they are merely a “religious” group. Jewish tradition holds that the Jews are both a people and a religious group. Here is the relevant text of Art. 20:

“The claim of historical or religious ties between Jews and Palestine does not tally with historical realities nor with the constituents of statehood in their true sense. Judaism in its character as a religion is not a nationality with an independent existence. Likewise the Jews are not one people with an independent identity. They are rather citizens of the states to which they belong.”

Note the contempt for Jews which oozes from this text. The history of Israelite/Jewish kingdoms in the country, as well as of the Roman province of Judea, is denied. The setting of much of the Hebrew Bible lies in the Land Of Israel which the PLO denies in a way reminiscent of Holocaust denial. Further, Jews do not have “the constituents of statehood in their true sense.”

The dhimmi roots of non-recognition

The Moroccan Jewish journey and exodus by Jeremy Dery
Posted by bataween at Tuesday, April 01, 2014

Email ThisBlogThis!Share to TwitterShare to FacebookShare to Pinterest
Labels: Dhimmitude

What a load of crap article, the Muslims don't respect any non Muslim religion , quit splitting hairs its a waist of our time.

if readers look carefully at the picture, originally a painting by a British naval officer, they will see that one man is missing his nose. That is Hayim Farhi, a Jewish advisor and official working for Ahmad Jazzar Pasha whose court was at Acre [Akko]. The pasha had Farhi's nose cut off when he displeased him.

Hayim Farhi is also missing one eye (this having been gouged out by the pasha) and I believe his ears are missing too.

hello,
Would Zorastarians have it the worse of any monotheitic group under the dhimmi laws? I read somewhere that if they were killed, the retribution payment was even less than Jewish or Christians dhimmis. They were also under Shia control mostly.

Zoroastrians certainly have it bad under the dhimmi laws, as this Guardian article shows. I have heard it said by a Zoroastrian herself that the inheritance laws favour over his /her siblings a member of a family who has converted to Islam. I don't know if this also applies to Jews, presumably it does.
http://www.theguardian.com/world/2006/oct/04/worlddispatch.iran
Both Jews and Zoroastrians are considered 'najas' (unclean) by Shi'as.
Re. blood money according to this article from 2013 http://www.frontpagemag.com/2013/majid-rafizadeh/humanitarian-tragedy-irans-beleaguered-jewish-community/
Jews and women receive half the blood money that Muslims are entitled to. There would seem to be no difference between Jews and Zoros in this case.

You're right. Since this article is about dhimmis, I think a more appropriate picture should be shown and not of a jew with a high status. It sort of defeats the purpose of writing about dhimmis in the first place.

But that is just the point. No matter how high the status of Hayim Farhi he still needed to be demeaned and mutilated by the pasha to put him in his place.

David, Bataween is right. Hayim Farhi was a valued official of Ahmad Jazzar Pasha. However, Jewish officials and advisors were regularly humiliated by, among other things, being forced to sit on the floor while others sat on chairs.