The 'dhimmi' roots of non-recognition 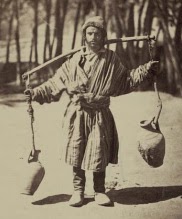 
We now know that the Palestinians have decisively rejected  Israel's demand for 'recognition of Israel as a Jewish state'. But few commentators have bothered to examine the deep religious and cultural underpinnings of such rejection, claims Lyn Julius in The Times of Israel:

So far, few have remarked on the religious and cultural underpinnings of the Arab rejection of ‘recognition of Israel as a Jewish state’.

The Muslim denial of collective minority rights is rooted in the historical rejection of non-Muslim peoplehood. Dhimmitude, a term coined by the historian Bat Ye’or, describes the Islamic practice of denying equality to Jews and Christians who live under Muslim rule. Islam offers them religious autonomy, not national freedom. The orthodox Palestinian line has been to deny Israel’s existence, but to offer to allow Jews, after Israel’s demise, to live in a “secular and democratic” Palestinian state. Implicit even in the Saudi peace initiative, hailed by many Israelis as a moderate and reasonable blueprint, is the notion that, in return for ‘normalisation’ ,the Jews of Israel must agree to submit to the traditional cultural and political dominance of the Muslims.

For 14 centuries, Jews, whose presence predated Islam in the Middle East and North Africa by up to one thousand years, lived in an atmosphere of ‘cordial hatred’ alongside Muslims. It is debatable whether Jews ‘had it better’ under Muslims than Christians; that, according to the acclaimed historian Bernard Lewis, is another myth. ’Despised but indispensable’ Jews were spared conversion to Islam because they could be exploited for their essential skills – as international traders, usurers and craftsmen.

But Jews had few rights under Islamic tutelage. They surrendered their right to self-defence to Muslims, paying ‘protection money’ – the jizya poll tax – in order to guarantee their physical safety. They had to submit to ritual humiliations reminding them of their cursed and lowly status – they had to wear special clothing, could not build their homes higher than the Muslim, could not bear witness against a Muslim in court.

These rules were mostly abrogated following pressure from the European colonial powers in the 19th century, but, following the rise of 20th century Arab nationalism and now Islamism, indigenous (non-Arabs and) non-Muslims are once again being denied their rights. The Assyrian Christians, the Kurds and the Copts, experienced – and still experience – vicious persecution. But only one group – the Jews – who once numbered almost a million before 1948 – have been ‘ethnically cleansed’ from the region.

Jews from Arab countries escaped the gallows of Iraq, the torture of Egyptian prisons, violence and political and economic strangulation, to seek refuge in Israel and the West. They and their descendants now form almost half the Jewish population of Israel. Israel unshackled them from their traditional subjugation to Islam. Overcoming social discrimination in Israel’s early years, Middle Eastern and North African Jews are free and full Israeli citizens, able to live their lives in dignity and security, and able to defend themselves and their state.

But the Jews are one of the few non-Muslim peoples to have achieved self-determination. A nation of former slaves has committed the unforgiveable sin of overturning the natural order: Israel has repeatedly defeated the Arab Muslims on the battlefield. For the humiliated to now humiliate their traditional oppressors is unbearable.

“The Arabs in the past merely tolerated the existence of Jewish minorities, no more. They have not yet recovered from the shock of seeing their former underlings raise up their heads, attempting even to gain their national independence! They know of only one rejoinder: off with their heads! “

The 50 percent of Israelis who hail from ‘Arab’ lands will defend their sovereignty and independence with their lives, rather than re-submit to Muslim rule.

It is a tragedy that western liberals do not see the self-determination of a small, indigenous Middle Eastern people – the Jews – as a progressive cause. Instead they support the Palestinian campaign against Israel – deceptively cloaked in the language of human rights. In so doing, they have become unwitting agents for the re-establishment of Arab and Muslim supremacy over a ‘dhimmi’ people. The Palestinians have skillfully cultivated their ‘underdog’ image. In reality, however, they are backed by hundreds of millions of Arabs and Muslims, enormous political clout and vast financial resources. The Palestinian cause was always a pan-Arab cause. Now, with Hamas and Hezbollah in the ascendant and the backing of the Islamic republic of Iran, it is an Islamist cause.

The turmoil of the ‘Arab Spring’ has been casting a long-overdue searchlight on the grubby repressive politics of Arab regimes. Perhaps greater freedom will result for both non-Muslims and Muslims. But we need a sea change in the way that the West views political rights in the Middle East belonging, as of right, to Arab Muslims. Israel has been misrepresented as an outpost of western colonialism. In reality, it represents the national liberation of the Jews, one of the most ancient of native Middle Eastern peoples.

Article in Polish
Posted by bataween at Sunday, March 23, 2014

Here is another piece on this issue of recognizing Israel as a Jewish state.

What I think also needs to be pointed out is that the PLO in its charter, Article 20, already denies that the Jews are a people but merely a "religious" group. Here is the relevant text of Art. 20:
"The claim of historical or religious ties between Jews and palestine does not tally with historical realities nor with the constituents of statehood in their true sense. Judaism in its character as a religion is not a nationality with an independent existence. Likewise the Jews are not one people with an independent identity. They are rather citizens of the states to which they belong."
Note the contempt for Jews which oozes from this text.

This is why this is a drop dead red line and always will be. let the Arabs foam and rave all they like about how their dying wish is to exterminate all Jews everywhere. We know that already and don't care what the 11th century thinks.