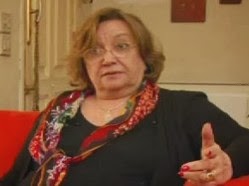 
The number of Jews living in Cairo went down to 13 last week with the death from a heart attack of Nadia Haroun, 59, one of the youngest, reports The Wall St Journal. Nadia, a lawyer, was the sister of the leader of the tiny Jewish community, Magda Haroun, and was thought to be an important influence on Magda. The Israeli ambassador to Egypt may not be invited to the funeral today of a daughter of the fiercely anti-Zionist Chehata Haroun, who in the 1960s chose to risk the life of a sick, third daughter rather than leave Egypt.

Last week, one of the few remaining Jewish Egyptians passed away, bringing closer to an end thousands of years of Jewish life in Egypt.

Ms. Nadia Haroun, who died at 59, was the youngest of the 20 Jews who were left in Egypt after President Nasser forced most of the 80,000 Jewish population out of the country in the 1950s and 60s.

Yet, these days, many Egyptians think that the last of Egypt’s Jews left with Moses, unaware that there are still Jews living amongst them. Egyptian history textbooks leave out any mention of history’s most influential Jewish Rabbi, Mosheh ben Maimon (AKA Maimonides), who lived and died in Egypt.

Ms. Haroun was the sister of Magda Haroun, the head of Jewish Community Council in Cairo, and the youngest daughter of the late Chehata Haroun, a famous lawyer, writer and activist who fought for the rights of the Jews in Egypt.
After the creation of the Israeli State in 1948, very few Egyptian Jews moved to Israel. It wasn’t until 1956 when President Nasser led a campaign demonizing Jews that “Jewish” started to become synonymous with “Zionist” in the Egyptian collective conscious. Mohamed Abul Ghar, who was a member of the 50-strong committee that wrote the Egyptian constitution in 2013 and published a bestseller book about Egypt’s Jews, said “Mass hysteria broke out then among the Jewish community and almost 60% of them left fearing for their lives, escaping to Europe and the Americas, not to Israel, they were anti-Zionists.”

But those who chose to stay continued to be persecuted. In his book “A Jew in Cairo” Chehat Haroun included a letter that he had sent to President Nasser reproaching him for being deprived of his rights as a citizen. Mr. Wasfy Henry, a close old friend of the Haroun sisters, said, “I learned the meaning of patriotism and homeland from this family.” Yet, this same letter was the reason Mr. Haroun, as well as all the Jewish men who were left in Egypt at the time, were arrested and held until the end of the war in 1968. They were then forced to leave the country, except for 12 of them.

Ms. Magda Haroun said in a November press conference held to discuss the 2013 constitution, “we ought to correct mistakes in our history and reconcile with our past.” (...)

Less than a year ago the former Jewish community president, Ms. Carmen Weinstein, passed away and her funeral was attended by a large crowd including the Israeli Ambassador to Egypt, Yaakov Amitai, along with Jewish diplomats and expatriates from all over the world. No Egyptian government representatives attended.

Ms. Nadia Haroun’s funeral today is expected to attract a similar crowd. “Except maybe for the Israeli Ambassador,” said Dr. Abul Ghar. “The Harouns are different. When Chehata Haroun died he asked in his will to not allow Israelis to pray in his funeral.”

Ms. Magda Haroun says she is preparing to be the last to close the door on Jewish life in Egypt and hand over to the Egyptian authorities the keys of 27 synagogues and one of the oldest Jewish cemeteries in the world, Bassatine.