March murder most foul in Cairo 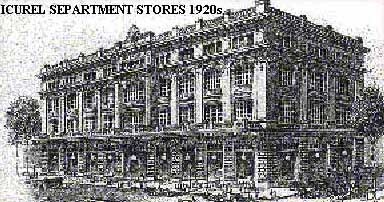 On March 4, 1927, Solomon Cicurel – one of three brothers who, together with their father, owned and ran Cairo’s leading department store – was brutally murdered in the master bedroom of his Giza villa. A Jew went to the gallows for the crime, writes David B Green in Haaretz, but we may not yet have heard the definitive version, nor the end of the story (with thanks: Lily):

Cicurel was born in 1881, the oldest of the three sons of Moreno Cicurel. Moreno had immigrated from Smyrna (today Izmir), Turkey, in 1870. His first Cairo business was a textile store he co-owned in Cairo’s El Mousky district. After that, he opened the department store Au Petit Bazaar, which eventually became Les Grand Magasins Cicurel. Les Grand Magasins was Egypt’s grandest emporium, the local equivalent to Galeries Lafayette in Paris.

After the death of Moreno in 1919, his sons – Solomon, Joseph and Salvator – continued to run the family business empire. Joseph (1887-1931) was a founder of Banque Misr and the group of companies owned by the bank, whose Jewish and Egyptian owners wanted to break the foreign grip on the country’s economy.
Solomon was the senior partner in the Grand Magasins, and he lived in a mansion on al-Rihama Street, along the Nile in Cairo’s exclusive Giza district. It was there that, in the early hours of March 4, Solomon was stabbed to death in his bed. Beside him was his wife, Elvire Toriel, who was unable to offer detectives much assistance since the assailants had rendered her unconscious with chloroform.

Because of the high standing of the Cicurels in Egyptian society, the case was given top priority and, within a day, four men had been arrested for the crime, which was apparently a burglary gone very wrong. (Elvire’s jewels, kept in the bedroom, were gone when the police arrived.) Two men were Italian: the family’s chauffeur, and a friend; a third was Greek, the driver for another Cairo family; the fourth was a local Jew.

At the time, Egypt still functioned under the “capitulations” system, by which foreign nationals were tried by their own states. And because neither Italy nor Greece had death penalties, it was only the Egyptian Jew, Dario Jacoel, who faced the gallows for the crime, which he was said to have masterminded.
For those looking for a more sensational explanation for the crime, it turned out that the Greek chauffeur, Anesthi Christo, had previously been employed by the Cicurels, and had been let go a short time before by Solomon.

Samir Rifaat, author of a 1994 Ahram Weekly article on the affair, reported in 2000 on an email he received from a supposed great-nephew of Dario Jacoel, living in Texas and bearing the same name. He claimed that he had been raised on a grisly version of the Cicurel murder, according to which his namesake had been having an affair with Mrs. Cicurel, and took revenge on her and her husband when she decided to break off. To add an even more bizarre twist, Texas court records published online in 2005 indicate that a Dario Jacoel had been convicted of three counts of sexual assault of a child and two counts of injury to a child.

Following the deaths of Solomon and Joseph Cicurel, their brother Salvator assumed leadership of the family holdings. Salvator, who captained the fencing team that represented Egypt at the 1928 Olympics in Amsterdam, was also, at various times, president of the Sephardic Community Cairo, a top official in various commercial organizations, and friend with some of the Free Officers who overthrew the Egyptian monarch in 1952. Only in 1957 did Salvator finally sell the Grand Magasins and join the rest of his family in Paris.

how can it be that in europ there
where something about 10.000.000
jews and in the islamic world
just some 850.000 escaped
and there are not much
left there?
was there a hidden holocaust?
in every city of the ME
the jews where running the
basars, had to lend mony....
just 850.000, its litrali impssible.
in tiny georgia there lived
some 30.000 jews, its a mini-land
how in hell can it be that the whol population of the arab-pharsi- N-African region was populated by just 850.000
is there something that the
older sephardi jews are hideing,
a thing they are ashamed of,
sephardy jews have a other
understanding of honour,
then ashkenasim.
850.000 is a numbre much to small.
sorry for my rudimentari english.

not 1% but rather 4-5% most but a meaningful minority of the urban population. In Tunisia 140,000 Jews out of a total population of 2 million. But the comment above is interesting because many of the Berber population was Jewish... In Morocco there were 400,000 Jews and i also believe the numbers to be much greater.

i do not know nothing, i am just asking.
i am not fixed on the arabian detherts. there where jews from
afganistan-pakistan to morocco.
something smells strange for me.
was there anything to know what
hapend before the armenian genozid,
that we forget. that would mean
that just in germany you had more jews then in the whool islamic world? 850.000 isnt it strange?
i am just asking, i do not know
something, its just suspicious.

There is no doubt that the Jewish population would have been larger had there not been forcible conversions of Jews to Islam. The population of Christians disappeared altogether in the Maghreb and the Jews were most probably substantially diminished.
Chased out of England, France and Germany in the middle ages, Ashkenazi Jews experienced a large population growth over three centuries in Poland, but only came back to western Europe relatively recently - in 17th and 18th centuries.

there where forced konversions in europ to. in russia they hed a
policy of 1/3 conversion,
1/3 imigration in other
countrys ans 1/3 will starve to deth.
i know that one wing of my georgian part of my
ancestors came in the times of 1700 to 1800 from turky to georgia.
a grizzly time in georgian history, the litle land was ataked from turky, persia and others.
what forced them to this
step, becaus of the dissia the
muslims did not alow jews to konvert, they needed the taxes
and they needed the jews to
lend forcibeli there money.
there was something that
is hidden. no memoris to
the old land, no ties to relatives, you know the strong
band of famili ties in sephardi
clans, where there is hardli a diference in brither and cousin.
in teheran, isfahan, kabul...
there where larg numbres of jews,
if they did not convert till ~1800
what hapened then there???
just open your ears to this
question, may be some of our elders know something.
if i am wrong its great if there was something we ow to remember
and accuse.
shawua tow.