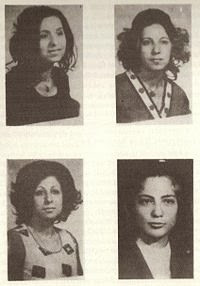 In keeping with a persistent pattern in the mainstream media, National Geographic magazine (subscription only - March 2014) downplays the persecution of Syrian Jews. The media watchdog CAMERA sets the record straight:

It is fair to describe the Alawites of Syria as a "long-oppressed group (is it? They have been Syria's rulers - ed)," which National Geographic does in its March 2014 feature about fighting in Syria. But in the same paragraph, reporter Anne Barnard downplays the suffering of Syria's Jews, stating only that "most left after the founding of Israel, when the government began viewing them with suspicion."

Was it mere "suspicion" (the author doesn't clarify whether the mistrust was deserved or unfounded) that reduced a community of tens of thousands to just a few dozen, or was it much worse?

It was in Syria that the "first serious blood libel in the Arab world" targeted the Jewish community, historian Norman Stillman explained. The charge that Jews murdered two Christians to use their blood for Passover rituals in 1840 brought torture and death to the Jewish community. Jewish children were taken hostage. A letter from Damascus pleading for help reported that "the Governor with a body of 600 men proceeded to demolish the houses of his Jewish subjects, hoping to find the bodies, but not finding any he returned and again inflicted on them further castigations and torments, the most cruel of which was the tying one end of a cord to the member of virility by the other end of which they were dragged through the Governor's Palace to a water closet into which they were thrown."

Nearly 100 years later, in 1936, JTA reported that in Damascus, "Jewish shopkeepers were forced to join [a] general strike under threats that their establishments would be burned down."

In 1944, the city's Jewish quarter "was twice attacked by mobs," Maurice Roumani pointed out in his chronicle of Jews in the Arab world.

The crescendo of anti-Jewish persecutions in the 1930s and 40s came to a climax in 1947. That December in Aleppo, Roumani notes, "an unknown number of Jews were butchered to death by mobs that burned four big synagogues, 14 smaller ones and destroyed 150 homes." In short, "the Jews of Syria were completely paralyzed, isolated and terrified."

In the years that followed, the emasculated Jewish community was encumbered with severe travel restrictions, boycotts, and a virtual ban from Syrian universities, and other indignities.

The plight of Jews in Arab countries has too often been downplayed in the media.

Read post in full
Posted by bataween at Saturday, March 01, 2014

the National Geographic magazine was minimizing and downplaying the oppression of Jews in Syria back in the 1970s. I don't recall the exact dates of offending issues of the magazine.