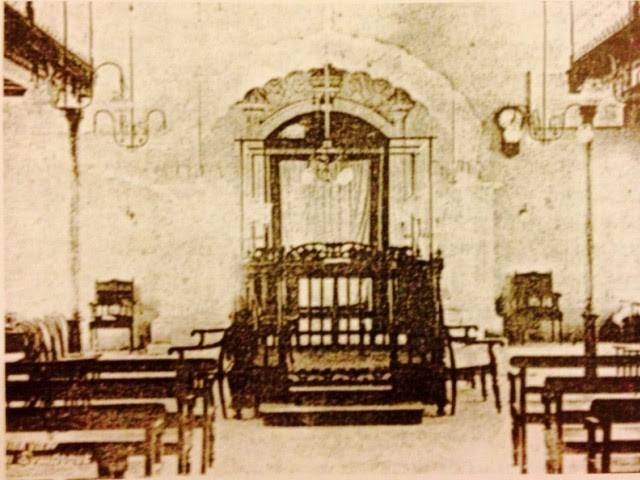 A Jewish welfare body has gone to court to try to preserve the land of the Magen Shalom Synagogue (pictured) where a shopping mall was built after the place of worship was demolished in the 1980s, The Express Tribune (Pakistan) has learnt.

(Karachi):The Bene Israel Trust has submitted an application to the Sindh High Court with the request that it take control of the property so it can maintain the land of the place of worship. (The Bene Israeli community was made of the Jews who were traditionally found in Konkan, roughly the coastal region from Goa to Karachi).

The trust’s attorney has informed the court that there used to be a synagogue on survey No. RC-3, measuring 1,190 square yards, located in the Ranchore Line Quarters. It was built in 1893, according to independent sources. The trust’s application says it was built for the sole purpose and object of performing worship, which is a right of the members of a minority community. It has been replaced by a Khurrum Shopping Mall.

At one point, the Court of the Judicial Commissioner of Sindh officially recognised the estate and declared that one of the Jewish community’s last known surviving members, Ephraim Joseph, would manage the property of the trust and operate its account in Grindlays Bank.

Joseph was appointed administrator but died on May 12, 1987. After his death, his sister, R. Rachel Joseph, became the last known survivor of the community in the country. She went to the court of an additional district and sessions judge, asking it to declare her the new administrator as she wanted to manage and run the affairs of the property of the synagogue.

According to the trust, in its application to the SHC, the sessions court had ruled in Ms Rachel’s favour and she was allowed to manage the synagogue’s property. However, the trust’s lawyer argued, she subsequently allowed for construction to take place there and this, says the trust, is in alleged violation of the law.

That law is the Protection of Communal Properties of Minorities Ordinance, 2001. Ms Rachel would have had to, under Section 3(b), acquire a no-objection certificate from the federal government if she wanted to sell or transfer the property belonging to the minority. Now the trust is relying on Section 2(b), which as its attorney argued, says that the synagogue’s property must be protected and preserved.

Read article in full
Posted by bataween at Wednesday, March 19, 2014