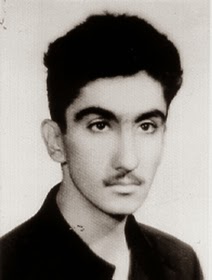 Babak Tehrani, one of the missing 11 now confirmed murdered

Two decades of mystery surrounding the fate of eight Iranian Jews who disappeared in 1994 came to a bitter close Thursday, as the Mossad said that the group had been murdered while attempting to emigrate to Israel. The Times of Israel reports:

In a statement released by the Prime Minister’s Office Thursday night, it was revealed that the Mossad had been tracking 11 Jews who had fled the Islamic Republic in four separate groups in 1994 and 1997.

In their attempts to cross the borders to neighboring countries, in hopes of eventually reaching Israel, the Jews had vanished without a trace, leaving families clinging to the hope that they had been kidnapped, or held in captivity by foreign governments.

The statement did not detail when or where the eight were killed or by whom. The PMO said the Mossad had relied on a “reliable source” for the information.
An inquiry into the fate of the additional three Iranian Jews, who were last heard from in 1997, is ongoing, the PMO said.

Iran: where are your missing Jews?
Posted by bataween at Friday, March 21, 2014

Could you guys help me? I was wondering if someone here can translate this for me:

Have you tried Google Translate?

I'll give it a try but keep in mind that that my dialect is darija not 3amiyya.

At first glance the writers seem to be asking to enter Israel.

"It's not Palestine or anything like that we want. We want the road to be opened. Further we do not want to rule or such, We'll never (?) ask for Israeli citizenship. In addition we want neither law of return nor such . With regard to Palestine, we don't know a thing about it. We don't want any Mahmoud Abbas. The Muslims... one billion and three hundred millions ...."

Must go but if not done by this evening I'll be glad to come back to it.

Thanks for the help Sylvia. When I first heard it, I thought he was actually asking for Israeli citizenship.
Here's the video:
http://youtu.be/wTGjtsgIMz0?t=52s

Cont-
"The Muslims... one billion and three hundred millions didn't come up with anything. Had Israeli children been in the camp in Yarmuck, the situation would have been decided a long time ago. Since the first weeks the Muslims were here... But the Muslims didn't bring us a thing. In fact, there are no Muslims in authority. This is all I want to say to Muslims and to Mahmoud Abbas and to everything he says he says I am President or other

Indeed that's what I get from the video which wasn't clear to me from the text.

That video is really heartbreaking. Particularly the child crying his hunger.

Those who put them there - and left them there in order to score points with the world opinion, as well as their supporters and useful idiots, are to blame.
Interestingly, when push comes to shove, they know who are the real criminals. Amazing.

The video has a link on the front that reads ajras.org
Below is something in English that I found about the organization.
Is the song that the organization takes its name from?
http://www.4shared.com/mp3/Q2Es2kQS/__online.html
جراس العودة.mp3
http://www.youtube.com/watch?v=146t6SOqRDs

There is at least one facebook page that you get to when you google the Arabic phrase above.