Culture could not save the Jews of Iraq 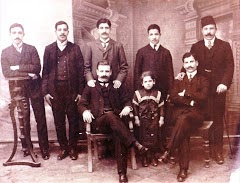 It has become fashionable for academics in Middle East Studies departments to redefine the identity of Jews in Arab countries as ‘hyphenated’ Arab-Jews, conflicted by the Arab–Israeli dispute, itself an aberration after centuries of peaceful coexistence. But nothing the Jews could have done would have prevented their ethnic cleansing from Iraq, argues Lyn Julius in her review of New Babylonians by Orit Bashkin (Jerusalem Post):

Crossposted at Harry's Place
Posted by bataween at Monday, March 17, 2014

Good criticism. Bashkin's book is a good example of what happens when historians don't even mean to aim for objectivity. Her personal sympathise with the Anti-Zionists and the Communists leads her to exaggerate their influence. Both groups were miniature in their size, but her personal bias obviously prevants her from seeing it.

Like in most Jewish communities in the new era, there was a tiny group of intellectuals that saw themselvs as "Arab (locals) of the religion of moses". At the highest point of their inner-conflict some even considered converting to Islam (see Nissim Qazaz article, pe'amim 42). They were also the ones filling the communists ranks. But this got nothing to do with how the vast majority of Baghdadi and Basrawi Jews saw themselvs.

Iraqi Patriotism is a different thing. Jews were indeed very patriots, but the binary that Baskin sees between "zionist" and "iraqi patriot" didn't exist in their eyes. they were both.

Bashkin's mentor was Khalidi. It is interesting that Khalidi is a pet of the NYTimes. Khalidi's role and favoritism for him in the Establishment in the USA show that the problem is not only corruption among the academics but among those who promote them and appoint them and publicize them. Khalidi has enjoyed a lot of favors in the academic world from the administrations and from the press and politicians like Obama. Here is Martin Kramer on how Khalidi is favored and protected by the NYT:

Kramer also wrote an expose on scholarly corruption in the ME studies field in the USA, Ivory Towers on Sand.

Bashkin seems to think that the Iraqi Communists were patriots. Maybe so but the Iraqi Arab nationalists did not think so. Recall how the Baathists slaughtered Communists in 1961 and/or 1963

this review by Lyn Julius is linked to from Prof Martin Kramer's site.