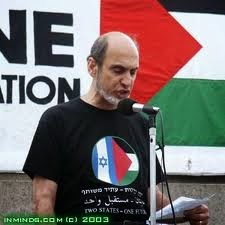 The latest move to stigmatise Israel's actions in the 'occupied territories' by calling for a boycott of Israeli architects would not normally be a focus of this blog - were it not for the major part played in the boycott campaign by Abe Hayeem, an architect of Baghdadi-Jewish origin.

"Britain’s leading architectural association has called for its Israeli counterpart to be excluded from the International Union of Architects in protest at Israel‘s occupation of Palestine, in a further indication of the growing momentum of the boycott movement.

"The Royal Institute of British Architects (RIBA) has demanded the suspension of the Israeli Association of United Architects (IAUA) from the international body, saying it is complicit in the construction of illegal settlements in the West Bank and East Jerusalem, and other violations of international law."

It's not the first time that the activities of Abe Hayeem have come to Point of No Return's notice.

The motion for a boycott was passed by 23 votes to 16, with ten abstentions, after Hayeem gave a presentation to the RIBA Council.


The irony that Abe Hayeem comes from a family of Iraq Jews, themselves 'ethnically cleansed' from their homeland, did not escape commenters when Hayeem wrote a piece for the Guardian on the 'dark' colonial past of Tel Aviv :

Perhaps next week you will write an article condemning the mistreatment and expropriation of the Jews of Iran, Iraq, Syria, Egypt ....
And perhaps pigs might fly.
If the Arab regimes had not driven out their Jewish populations, then there might not have been the same need for Israel to house them all.

Having noted that you are a Jew from Iraq which numbered in 1948 about 120,000, would you care to discuss why the Arabs in Iraq (and everywhere else in the Middle East) chose to persecute, harass and evict the Jews? Today, fewer than 100 Jews remain in Iraq. What had the Jews in Iraq done to deserve being run off from their homes, and their possessions confiscated?

Hayeem himself persists in the belief that 'the Zionists' destroyed Arab-Jewish coexistence in Arab countries, spouting base propaganda:

Regarding Iraqi Jews, my family loved living in Iraq and spoke fondly of their Arab neighbours. Iraqi Jews always regretted leaving. It is well known how Mossad agents stirred up trouble, to the extent of bombing the Baghdad Synagogue, to frighten Iraqi Jews into leaving.

Israel's agenda was to create the flight of Arab Jews, to act as a quid pro quo for ethnically cleansing the Palestinians. Many Arab countries like Libya and Morocco tried to stop their Jews from leaving.

One can only hope that Abe Hayeem knows more about his chosen profession of architecture than he does about Jewish history and Middle East politics.

Email ThisBlogThis!Share to TwitterShare to FacebookShare to Pinterest
Labels: Jews of India, Jews of Iraq, Leftist bias against Jewish rights

In that case build a tower in Jerusalem taller than al Aqsa and put a restaurant on top called "Gay Mohammed's - home of the world famous bacon Martini!" and dedicate it to RIBA and this moron in particular.

Arabs are building all the time in Arab neighborhoods of Jerusalem.

Unbelievable that Angela Brady was suckered by Hayeem's lies and 22 more RIBA Council members were then suckered by Brady and Hayeem. How stupid can people be.