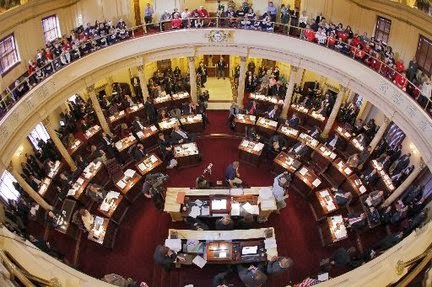 The US Senate has approved Senate resolution 333, co-sponsored by 30 senators of both parties, which 'strongly recommends' that the agreement to return the Iraqi archive be re-negotiated. Meanwhile, in a statement delivered at the opening of the archive exhibit at the Jewish Heritage Museum in New York, the Iraqi ambassador to the US said he was seeking a 'creative approach' to ensure that Iraqi Jews had access to their documents. Though he repeated his government's claim that the material belongs to Iraq, he added: "We are in discussions with our American counterparts to find a creative approach to ensure access and sharing of these documents."

Here is the press release announcing the passing of res. 333 on 6 February:

"WASHINGTON, D.C.  – The Senate unanimously approved a bipartisan measure to help safeguard roughly 2,700 Jewish artifacts discovered in Iraq in 2003. U.S. Senators Pat Toomey (R-Pa.), Richard Blumenthal (D-Conn.), and Charles E. Schumer (D-N.Y.) believe the treasures – which include Torah parchments and ancient prayer books – should be housed in a location that is accessible to scholars and to Iraqi Jews and their descendants who have a personal interest in the artifacts.

The Senators’ resolution urging the State Department to re-negotiate the return of the Iraqi Jewish Archive to Iraq is attached.

American soldiers uncovered a collection of Jewish historical items stolen from Iraqi Jews by Saddam Hussein, who hid them in the basement of the Iraqi secret police headquarters. In 2003, the U.S. and the Coalition Provisional Authority signed an agreement whereby the U.S. would preserve the artifacts and then send them back to Iraq. The collection, which cost U.S. taxpayers nearly $3 million to preserve, is being displayed by the National Archives and Records Administration. The United States agreed to return the materials to Iraq in 2014, despite the fact that only a handful of Jews live in Iraq today.

“These priceless artifacts were stolen by the former government of Iraq,” said Sen. Toomey.  “We should not ship the collection back to a country where their owners no longer reside.  With the passage of this bipartisan resolution, I am pleased all of our colleagues agree with me and Sens. Blumenthal and Schumer that the State Department should reexamine returning the collection to Iraq.”

Said Sen. Blumenthal, “It is near miraculous that these artifacts survived Saddam’s regime. We must ensure their protection and preservation by facilitating an environment equipped to care for such delicate documents. Most important, the documents should remain easily accessible to Iraqi Jews and their families, nearly all of whom live outside Iraq. We must take action now so generations to come can enjoy these incredible pieces of history.”

“These treasures are first and foremost for the world’s Iraqi Jews, and they should be housed in a place that is accessible to them,” said Sen. Schumer. “This is a group of people that have had so much of their history taken away or destroyed over the years, and under no circumstances should these artifacts be handed back to Iraq and added to the list.”

The National Archives and Records Administration opened an exhibit in Washington, D.C. that displayed 24 of the recovered objects from October 11, 2013 to January 5, 2014. The archive is also being displayed in New York City from February 4, 2014 to May 18, 2014.  The archive is scheduled to be sent back to Iraq in June 2014."

Press release by Sen Toomey (with thanks: Eliyahu)

CONGRATULATIONS on this good news! May we see results.