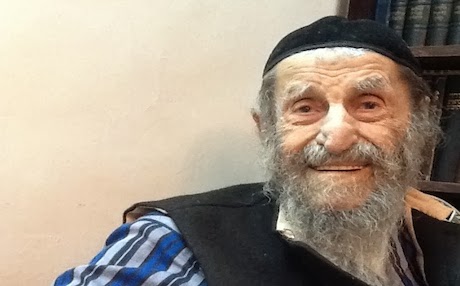 The world's oldest Jew is also the world's oldest Kurdish Israeli - Rabbi Zechariah Barashi, who came to Jerusalem in 1938. Jewish-Muslim relations in Kurdistan were excellent, Barashi tells Lazar Berman, writing for Rudaw, a Kurdish online news medium. Traditionally, the Jews were under the protection of the Agha, the local tribal chieftain, and were desperately poor and illiterate. (With thanks: Dominique)

In a humble apartment in Jerusalem’s Baka neighborhood, about a mile south of the walls of the Old City, the world’s oldest living Jew goes about his daily ritual. As he has for over a century, the rabbi rises in the morning, puts on his tefillin, or prayer phylacteries, with the help of one of his students, and says his morning prayers.

Then, he sits to learn the Torah, Talmud, or kabbalah, examining it with the same fervor and passion he did when he started learning as a teenager. In addition to being the world’s oldest Jew, Rabbi Zechariah Barashi, 114, is also the world’s oldest Kurd.

Barashi, still sharp and gregarious in his old age, remembers details from events 80 years ago with surprising clarity. He gives exact dates, names, and even prices of bus rides as he recounts his time growing up in the Badinan region of Kurdistan, and his journey to the British-controlled territory that would soon become Israel.

He was generous with his time to sit with me for three hours to answer questions and tell his story. Born in Barashi in 1900, Zechariah was the last child born to Rabbi Eliyahu Barashi and his wife Simchah. Six of his siblings died in their childhood, leaving him with two older sisters, Sarah and Reichana.

His parents worked in traditional Jewish trades, including farming vineyards, dates, and nuts. Jews, Barashi told me in his home, also sewed Kurdish clothing, which were seen as especially well-made by their Muslim neighbors. At the age of eight, Zechariah moved with his grandfather to Atrush itself. His father eventually joined them, becoming the rabbi of the Jewish community there, which only numbered about 100 people.

His family continued to move from village to village as Barashi’s father served the Jews living in the region’s small communities. “He would leave the house on Sunday and return on Friday,” Barashi recounted. “Sometimes he would come home after two weeks.”

Life was not easy for the Barashis. He remembers a difficult three-year famine after the First World War. “The Turks looted whatever they could after the war,” he recalled, “and whoever survived the war died of hunger.”

It was also difficult for Jews to study Torah and Talmud, as there were no yeshivas, or study halls, in the region. However, the larger communities, like Duhok and Sindor, enjoyed large synagogues with opportunities for study.

But, as opposed to many other Jewish communities across the world, 90 percent of the Jews in Kurdistan could not read or write. Less than one in ten even knew how to pray. “Despite this,” Barashi emphasized, “the Jews kept the Sabbath and the holidays, family purity, a strictly Kosher home, fear of heaven and parents, and respect for their elders.”

Because of the lack of education, the rabbi had to explain the meaning of the Hebrew prayers in Aramaic or Kurmanji at the end of the service so the community would understand. Despite the challenges, Rabbi Barashi has fond memories of his childhood.

When he wasn’t studying the Torah with his father at home, he was out playing with the children of his village, Muslims and Jews together.

“We had excellent relations with the Muslim Kurds, like brothers. We almost never fought. If there ever was a fight, they would quickly inform the Agha, who would warn the parents that if their child acted up again, he would expel the entire family.”

He sees no comparison between today’s tensions between Jews and Arabs in Israel, and the relationship between Jews and Muslim Kurds in Kurdistan. “It was like the Garden of Eden there,” he said. “Today, everything is madness.”

Barashi remembers a man named Mirza as the Agha of Meriba, the town his family was living in. He was as “an important man, one of the greatest governors in the mountains of Kurdistan.”

Mirza’s wife saved Barashi’s life at the age of 11. It was after the Passover holidays, and not one speck of food remained in the house. For two days, the family did not eat, and Zechariah fell sick. His father was away trying to buy meat on the black market. After having lost so many children, his mother was determined to save him. She went to the Agha’s wife, and begged her for food.

The wife hesitated at first, saying she was afraid her husband would find out, and be angry that he would now be forced to give to everyone who asked. Barashi’s mother persisted, her only son’s life was at stake, and assured her that she would hide the food under her dress, and no one would know. The Agha’s wife agreed, and the boy recovered.

Read article in full
Posted by bataween at Wednesday, February 26, 2014