Fighting for Iraq in the Iraq-Iran war

With thanks Lisette and Charles

In traditional Muslim societies, Jews and Christians were prohibited from carrying arms - indeed, as dhimmis they were forced to surrender their right to self-defence to the Muslim majority, whose responsibility it was to protect them.

Dhimmi status was abolished in the latter half of the 19th century. For the first time, Jews were drafted into the Ottoman army after 1911, and served in World War l.

However,  Jewish citizens were again exempted from military service when Arab states went to war against Israel.

All male adults in Iraq were supposed to serve in the Iraqi army. They had to carry a certificate to show their army service status. Any male that did not have this certificate was arrested on the spot and taken to the army.  Iraq in the 1940s, 50s and 60s would not accept Jews in the military: all Jewish males were given a certificate. In very large letters the word Yahudi (Jewish) appeared; and in smaller letters "NOT eligible for service". But in 1980, when there was a desperate need for manpower and Jews were too few to be considered a fifth column, Jews were drafted.

The Iraq-Iran war lasted eight years - between 1980 and 88. The cost was catastrophic for both sides in lives lost and economic damage: half a million Iraqi and Iranian soldiers, and as many civilians, are believed to have died, with many more injured.

R. was one of 13 Jews who served in the Iraqi army during the war with Iran. Three or four were posted to the front line. R. was assigned to an artillery unit which fought two bloody battles. Of 120 men in his unit, only 20 survived. Jews were also conscripted into the Iranian army. According to one source, 150 were killed.

Eliyahu S. is a dentist who served with a field medical unit. He volunteered in the surgical unit of the Rashid military hospital.

At first his motives came under suspicion. He had to submit to a gruelling interrogation. But soon his superiors took a liking to him and trusted him. A general, head of the division where he was based, asked him:"Do you work on Saturdays?" " I have to", came the reply. The general ordered a larger unit  to be built for Eliyahu and he was given a free hand in his work.

After two years, however, it was decided that Jews should be exempt from the army. Eliyahu was relieved to be discharged : he had seen some terrible sights. Two Iranian prisoners-of-war had been left to die in a pit at the mercy of wild dogs: " I saw their fragmented bones scattered all over. Would my end be like theirs?" he reflected.

But the war was still on. Eliyahu wanted to gain more experience and applied to the surgical unit at Basra general hospital. The Muslim surgeons' antisemitic response was to undermine his supervisors' faith in him." He's a Jew. Send him back."

"I would kick him out but bring me a Muslim who would put up with the bombing," his supervisor replied.

Later, Eliyahu served in the 1990 - 91 First Gulf War when  Iraq invaded Kuwait.
Eliyahu was pronounced dead after the ambulance he was travelling in was bombed. As he was being lowered into his grave, soldiers looking on noticed his toes twitch. "This is a message from heaven," they told their commander, please lift him out." Read his story here.

A myth arose that during the Iraq-Iran war that a young Jewish engineer had devised a means of electrocuting Iranian soldiers crossing swamps at night to the Iraqi side. In the morning, so the story goes, the Iraqi soldiers would fish out the bodies of the dead and pile them up. For this practical proposal, that Jewish soldier was said to have received a medal from Saddam. Saddam allegedly handed him the medal personally and kissed him on both cheeks.

R. dismisses the story as apocryphal - 'black' propaganda. Even if the story had been true, no Jew had ever been kissed by Saddam. (Emerging as Iraq's strongman under the Baath regime, Saddam showed his 'affection' for Jews by ordering scores to be abducted or executed - including R. 's own father).

However, one Jew, S. , a chemical engineer, did gain official recognition for designing a device in 1977 to monitor the feed mixture for materials producing concrete - saving time and doubling output. 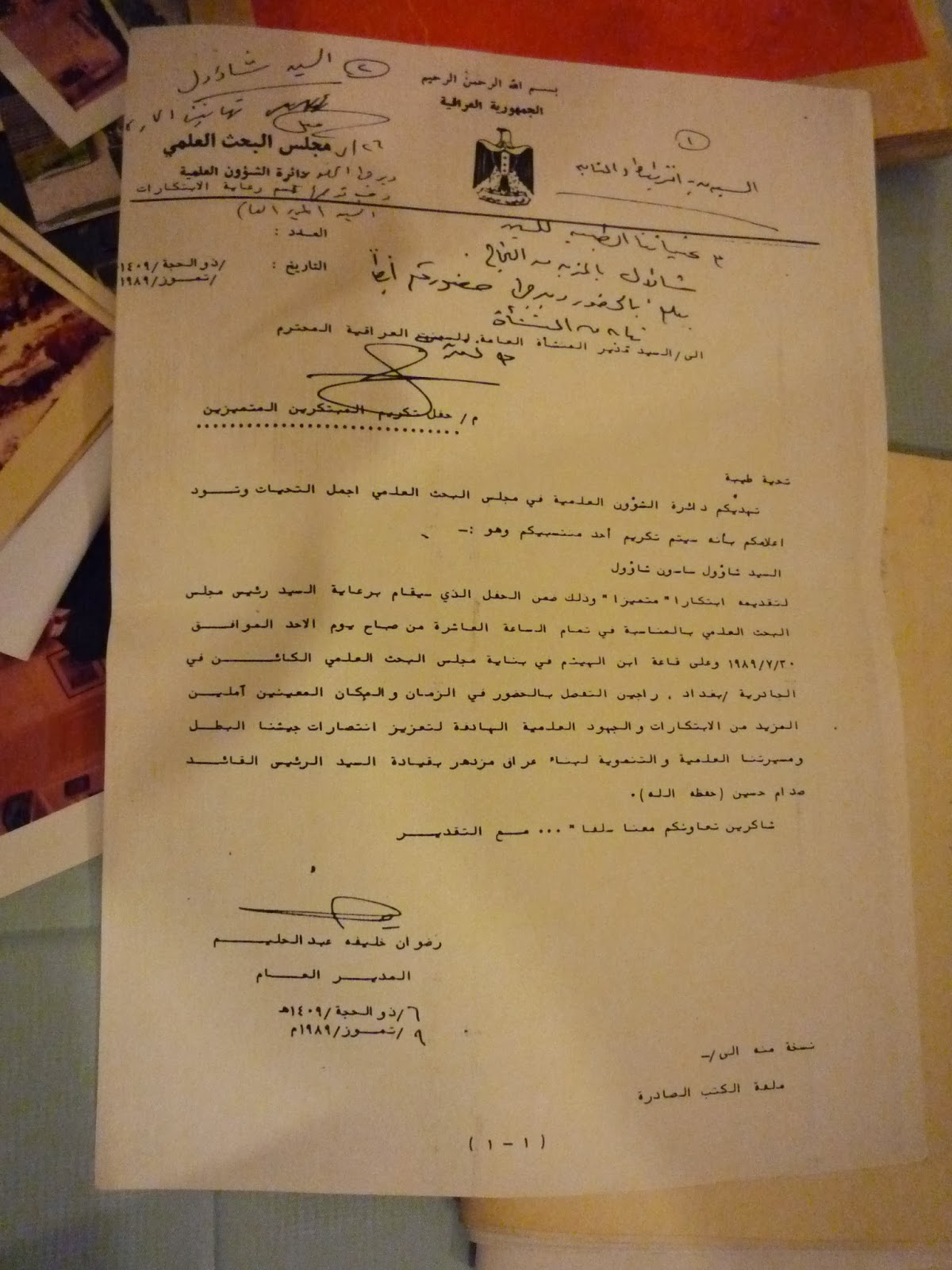 The letter inviting the Jewish engineer to attend a ceremony where he was awarded a prize for his invention.

Ten years later, at a ceremony attended by the press, the engineer was presented by the Ministry of Industry with a certificate of thanks for his services and 5, 000 dinars, then enough to buy a Mercedes Benz. His was the only invention submitted. In his speech the minister said that S. was of the Jewish religion and there was no distinction between Iraqis of different faiths.

In 1997, at a time when Iraq was prevented by sanctions from importing materials, the Jewish chemical engineer 'invented' a type of concrete able to withstand Baghdad's high humidity. He came to the UK in 2003, two months before the US invasion of Iraq.

that was extremely refreshing!
My daughter, at that time, had married in Israel, so we spent all our night watching TV. It was the first war live.
A scud had fallen right behind their apartment!
They had spent pratically 3 or 4 days with thier masks on and had been told that Sadam was going to send over bombs on Israel!
but my daughter also told me that no sooner hade a scud landed than all the young people rushed out to pick a piece of that fallen scud! Just shows rhe difference with older generation!I still have a picture of my daughter and hubby with their masks!