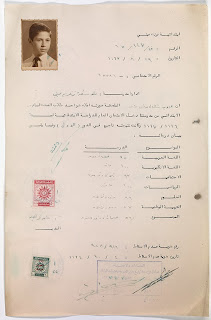 In 1967, Edwin Shuker was a 12-year old boy. He was all set to leave elementary school and embark on the secondary stage of his education. His school-leaving certificate showed he had the right grades to register for the elementary baccalaureate exam.

The certificate was one of 24 items from the Iraqi-Jewish archive selected for display at the just-ended 'Recovery and Discovery' exhibition at the National Archives in Washington DC. The  exhibition will transfer to the Museum of Jewish Heritage in New York in February.

However, three little words in Arabic show that Edwin Shuker's was no ordinary school certificate.

At the base of the sheet appear these three words:  Hawiyat adam al-Iskat.

The words say: Certificate of non-Denationalisation.

Chantal (not her real name), who escaped from Iraq along with Edwin in the early 1970s, happened to spot those three words when she visited the Iraqi-Jewish archive exhibition in Washington last month. Those three words encapsulate the system of discrimination and persecution reserved for the few thousand Jews still living in Iraq at the time.

" The Jews who applied to immigrate from Iraq  in 1950-51 were all stripped or their citizenship and denationalised BEFORE  even leaving the country. A law was passed in 1951 freezing their property. This denationalisation  systematically continued  even after the mass Tasqueet ( denationalisation) which saw 90 percent of the 140,000 strong community depart.  Any Jew who left Iraq, even those who left legally with a passport, to study at universities in England or Canada for instance, were also denationalised if they did not return within a year or two of leaving Iraq. Not only had the state seized their properties, but their inheritance was denied."

"For a Jew living in Iraq, this certificate had to be produced with every single transaction a Jew made in Iraq -whether to sit an exam, do business of any kind or buy and sell property (in the intervals  when this was permissible: when the Ba'ath party took power in 1963 and during Saddam's rule, no Jew could buy or sell property).

"Any foreigner - Egyptian, Pakistani or English - could take that exam, as long his marks were suitable. None would need neither that special Non-Denationalisation nor any other permit even though they were not Iraqi nationals.

"Those three words were reserved only for Jews living in Iraq."

Chantal adds: "Now there are only five Jews left ...and all of us who escaped with our lives can neither go back nor claim ownership of what we left behind !
I ask you, if this was not discrimination and downright apartheid ...what is ?"

Emile Cohen, an Iraqi Jew living in London,  left Baghdad in the early 1960s. He adds:

"There were many laws and regulations which were enacted for Jewish people by exception.  Indeed the 1951 law of denationalisation is one - and also regulations against entry to higher education institutions, trade restrictions etc.  These were not cancelled until General Qassim overthrew the monarchy in 1958. Many were, however,  resumed in 1963.

"The Certificate of non-Denationalisation was first introduced  after the mass immigration of the Jews from Iraq in 1951 and I have my copy issued in January 1964.  Strangely enough I was denaturalised later that year whilst studying abroad, plus a six-month jail sentence imposed in absentia. Institutional discrimination was applied throughout even at Qassim’s time.  No Jew was sent on a scholarship abroad."

my grandfather and uncles who were Egyptian Jews lost their nationality too!
It's all part of antismitism. M dad was Italian so theycouldnot do the samewith those holding an Italian passport
sultana