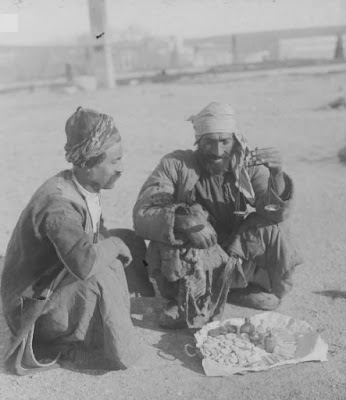 
"End this absurdity about Palestinian refugees", argues Michael Curtis in The Commentator. "In any case there were more Jewish refugees than Palestinian. His piece coincides with US Secretary of State  John Kerry's latest proposal in the 'peace talks' between the Palestinians and Israel (as reported by the Chinese Xinhua agency):  Israel should allow 80,000 Palestinians to return to Israel - more than the 30,000 assumed to still be alive today.

"We'll have Manhattan, the Bronx, and Staten Island too." In 1626, so the legend goes, a group of Indians, Munsees, possibly members of the Lenni Lenape tribe, sold the island of Manhattan to Peter Minuit, governor of New Netherlands, for goods worth 60 guilders or $24.

The Indian  (the fashionable modern term is "Native American") tribe has long since been displaced, and Manhattan today is worth just a little bit more than $24! Nevertheless, nearly 500 years later, the descendants of the tribe have not demanded the "right of return" to the area where their ancient forefathers once had homes.

Nor have they asked for a sum that would be in the trillions in compensation for the property. The "international community" might bear this in mind when evaluating the Palestinian "right of return" that has been an Arab precondition for entering the peace negotiations to end the Arab-Israeli conflict.

It is reasonable to assume that the Lenni Lenape descendants would not approve the reply of Yasser Arafat, as head of the Palestinian Liberation Organization (PLO), to an interviewer: "May I remind you that our movement is based on three words: right of return."

The problem started with Arab opposition to Jewish settlement in the area of Palestine even before the establishment of the State of Israel. As a result of the violent Arab Revolt of 1936-39, mainly led and orchestrated by the Arab High Command under Haj Amin al-Husseini, the Mufti of Jerusalem, over 10 percent of the adult population was killed, injured, or imprisoned.

This Arab wave of terror directed against British personnel, Jews, and other Arabs opposed to the Mufti and his followers resulted in the first wave of refugees, perhaps as many as 40,000 Arabs who fled the area.

But the main refugee problem was caused by the militant Arab activity in the mid 1940s and then by the 1948-49 War that was initiated by the Arabs.

The "catastrophe," as the war is named by the Palestinians, was brought on by the invasion of Israel immediately after its establishment on May 14, 1948, by troops from Egypt, Syria, Jordan, Iraq, and other Arab countries. As a result of the fighting, and for reasons that are still disputed, Palestinians fled their home in large numbers.

Before the end of the war, the United Nations General Assembly (UNGA) on November 19, 1948 passed Resolution 212 (III) to create the UN Relief for Palestinian Refugees (UNRPR). This body was replaced by decision of UNGA Resolution 302 (IV) on December 8, 1949, by the United Nations Relief and Works Agency (UNRWA).

About this UN concern for Palestinian refugees, two aspects are worth noting. One is the fact the UN ignored, and indeed still ignores, the reality that 700,000 Jews, probably a larger number than the actual number of Palestinian refugees, made exodus from the Arab lands in which their families had lived for centuries.

The second is that this instance is the only time that the UN has set up an agency only for one group of people and that this unique agency has remained in existence for 64 years.

I find it offensive to compare the original people of Manhattan to the "Palestinian" Arabs.