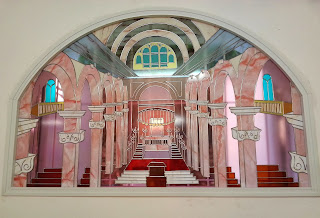 The Tel Aviv premiere of Amir Ramses' movie 'The Jews of Egypt' took place on 31 December at the World Heritage Center of the Jews from Egypt in Tel Aviv, together with the inauguration of a  sumptuous stained-glass window (above),  newly installed in the Center. It depicts the colourful motif of the Eliyahu Hanavi Synagogue of Alexandria. The Center itself has become an international hub for Egyptian Jews from all over the world, from Europe to Australia and Brazil. Here is a report by Levana Zamir, president of the Association of Jews from Egypt in Israel:

"A screening in a public cinema would perhaps have discomfited the Egyptian producer for understandable reasons, so we had it screened in our Center in Tel Aviv, for members only. The Center was so full of people who registered for this event, that we had to refuse entrance to some 30 more who tried to force their way in. The privileged who attended, were delighted by the sights of Cairo and Alexandria all along the movie. But when the author Mohamed Abul-Ghar said: "Egypt never expelled any Jew from Egypt", the audience shouted spontaneously: "No, this is not true !"

"In fact  the Abul-Ghar statement is a distortion of Egyptian history, probably out of fear of the Muslim Brotherhood then in power. One of the Egyptian Jews living today in France said during his filmed interview : "Thank you Nasser, because of you I became a millionnaire!...

" Everybody agreed happily and loudly.  All in all, Amir  Ramses' movie tells the actual truth: the Jews from Egypt interviewed, all of them living in France and Switzerland, testified to their own expulsion from Egypt in 1956, following the Suez crisis. The Egyptian Jews jailed in 1967 and tortured for three years running were not mentioned in Amir Ramses' movie.

"Egyptian intellectuals like Esam Fawzi recognized the fact that influential Egyptian Jews in Egypt were sincerely dedicated to Egypt 's cause and development, and the communist Alain Gresh living in France - biological son of Henri Curiel - deplored Zionism.

"The poor  Egyptian people in the streets of Cairo expressed their hatred for Zionism and for the Jews in general. What they do not understand, is that the  word "Zionism" has no meaning any more, since the State of Israel acquired its independence from the British Mandate in May 1948.

What could be more natural for the People  of Israel than living in the Land of Israel, Eretz Israel? The event ended with a buffet of the best of Egyptian delicacies: Kobeba, Kebab, Wara' Enab (grape leaves stuffed), Menenas, Gorayeba etc. - and champagne of course !"

'Jews of Egypt' has London premiere

In a way, there is some truth in the fact that they never expelled Jews! But then I do not know what to call what they did to those who were put in prison and then marched off with their hands in chains not even telling their families where they were being sent!-
Sorry to say one particular trait of Egypt is their acute system of lying "IT'S NOT i IT'S THE NEIGHBOUUR WHO DONE IT

wHY IN HEAVEB'S NAME ARE WE SO PROUD TO APPEAR IN AN EGYPTIAN FILM?wE HAVE WHAT THE FRENCH call la mémoire courte!)
SULTANA

Perhaps I should mention The reason why when contacted to participate,I refused.for the reason,
that I could not condone any film made by an Egyptian.I am still waiting for a word of excuse from the authorities, I think i"ll wait for a very long time!
sultana

o/t
Bataween', maybe I missed it but I don't recall seeing Caroline Glick's very good column on the Iraqi Jewish archives on PNR.

While I appreciate and admire the work done by the Association, I think we ought to temember that, apart from a few and very unfortunate cases of torture and death, all Jews, morally battered and financially ruined as they may have been, have left Egypt alive.... which has not been the case in countries which were supposed to be much more "civilised" than the Egyptians. Let's also remember that !

I do not agree to all those criticisms against Egypt and the Egyptians. I am an Egyptians, though of Jewish religion, I did not participate in the expulsion of any Egyptian from Egypt, furthermore I was not expulsed from Egypt, nor most of my family, friends, acquaintances or Jews from Egypt. Those who where expulsed from Egypt were only the French nationals and British subjects as a result of their countries attack on our country and perhaps any other who cooperated with the enemy-countries who attacked our home country Egypt. I disagree with the active and aggressive policy of the State of Israel, those pseudo-zionists, political zionists with their own selfish agenda. There are, and should be told the truth, and not the political motivated falsified tales of the propaganda to cover
one's evil or negative (to say the least) actions of others, whoever they are (Zionists, Iraelis and any other countries etc...) Suck is, I consider, many also do consider to be the actions of the protagonists of the creation of the state of Israel and its continuing policies. I am Egyptian born and national, I consider myself so even though we had to give-up our nationalities to leave Egypt, but all Egyptians nationals had to do so irrelevant of their religions or other categories. Egyptians did not expulsed us, by the contrary when we decided to leave they inquired why and offered to help us stay, but we had to leave not because of our fellow-egyptians but because outside countries had used their malevolent powers that caused grave consequences for Egypt, its residents and citizens. I care about Egypt, it is bad what it has become, what international politics and those powerful and malevolent countries and parties have done to our country/Egypt by imposing their own wills and interests.
One more things our new countries of residence have not done so good toward many of us, unlike the one who write above about "thanking Nasser because his exodus from Egypt helped him be a millionaire in another country" etc... etc... this comment is non-sense and ways to rationalize the bad consequences of those negative and selfish policies of some that caused harms to others (to us, Jews, all Egyptians and all others).

To the last Anonymous, I am baffled by your comment: you may not have been expelled personally, but plenty of others were in the most dramatic way. They were not only British and French nationals. There were Italians, Greeks (who had no quarrel with Egypt) and even Egyptian nationals who were made to leave.

My understanding from the director is that this was an unauthorized showing. Thus to write ""A screening in a public cinema would perhaps have discomfited the Egyptian producer for understandable reasons, so we had it screened in our Center in Tel Aviv, for members only." is misleading, and he certainly is unhappy about this, as it undermines his distribution agreement with his backers.

We were Italian Jews living in Egypt for over 200 years, deeply embedded in Egypt's cultural and economic welfare, but we were expelled nonetheless. I have recorded the experience in my memoir of an unusual childhood: SIPPING FROM THE NILE, My Exodus from Egypt. The book and audio are available from Amazon and on Kindle. It shows what happened to those of us who were dispossessed of our roots and our heritage, our possessions, and the close family ties we valued so much, although happily not of our lives or our non-Egyptian passports. website www.jeannaggar.com
Jean (Mosseri) Naggar. USA

The message of the movie is that the Jews of Egypt were Egyptian patriots and that there was no justification at all for their defacto expulsion from what they at regarded as their home and own country. That is the overlying message of the movie... Why complain?

If that young film-maker had lived through the Nasser years, his film would have been different!
sultana