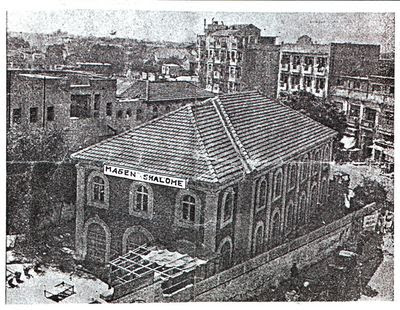 The Magain Shalome synagogue in Karachi was demolished in 1988.

A campaign to persuade Pakistani authorities to permit the re-establishment of a synagogue and the refurbishment of a derelict Jewish cemetery in Karachi has been launched by a young member of the country’s dwindling and beleaguered Jewish community, Bernard Josephs reports in the Jewish Chronicle. But Pakistani's handful of Jews are all elderly or masquerading as Muslims or Parsees. The question is - who would use the synagogue?

Virulent antisemitism fuelled by widespread hostility towards Israel and Islamic fundamentalism has seen an exodus of nearly all Jews from the country, most of them seeking refuge in Israel, India and the West.

However, Fishel Bhenkhald’s Jewish maternal grandparents, who immigrated from Iran during the British Raj, decided to remain. Fearing for the safety of their child (Mr Bhenkhald’s mother), they registered her as a Muslim.

Now 27, Mr Bhenkhald, whose father was a humanist-minded Muslim, has rediscovered his Jewish roots and is devoting himself to “claiming Jewish rights in Pakistan”.

He has petitioned Pakistani courts for legal approval to have a shul built and is asking for support for his plan to work on the Jewish cemetery in Karachi.

The city’s former synagogue, Magen Shalom, was demolished in 1988, during the Islamist dictatorship of Mohammad Zia-ul-Haq. It was replaced by a shopping and residential plaza.

“Call me a dreamer,” Mr Bhenkhald said, “but if my drive to clean the Jewish graves goes on as intended it could result in cutting through the red-tape of city government to get legal permission to build a small synagogue.”

He will clean the graves “first with my own hands, equipped with nothing but a spade and elbow grease. I am also using Twitter to ask for volunteers in Pakistan to help me.” Despite hostility in the press and from the authorities, he continues to publicly advocate a relationship between Pakistan and Israel.

He also faces problems in changing his status as a Muslim to that of a Jew.
“Pakistani law does not allow its citizens who are registered as Muslims to change their religious status. To do so is punishable under Sharia law,” said Mr Bhenkhald.

Read article in full
Posted by bataween at Tuesday, January 14, 2014

NOT LATER THAN THIS SUMMER i MET TWO PERSONS WHO DISCOVERED THEY WERE JEWS
THEIR PARENTS NEVER TOLD THEM THEY WERE JEWISH. IT IS ONLYY AFTER THEIR DEATH THAT THEY FOUND OUT THEY WERE JEWS.
THIS TOOK PLACE IN THE NETHERLANDS
SULTANA

Sultana: Bob Rae, former premier of the province of Ontario and interim leader of the Liberal Party of Canada, didn't find out that his paternal grandfather was a Scottish Jew named Andrew Cohen, who abandoned his grandmother, Nellie Rae with several children to raise, until he was in his mid twenties. His late father, the diplomat Saul Rae, looked like my mother's Ukrainian Jewish father and his brothers.

Fear of discrimination was just that purvasive everywhere that the children were raised as Anglicans under the grandmother's surname.

And my boss tells me he ran into the same attitude in Montreal, working as a young executive in the life insurance industry, when another older exec made a comment to the effect that he had "hired one of them".

Thanks to the blog" Point of No Return" for posting the story about the struggle of Pakistani Jews to have equal religious rights in Pakistan.

Each drop of water counts to wash away walls of persecution.

I'm also seeking volunteers to clean up the neglected Jewish cemetery in Mewah Shah cemetery in Karachi city of Pakistan.