Forty-five years since the Baghdad hangings 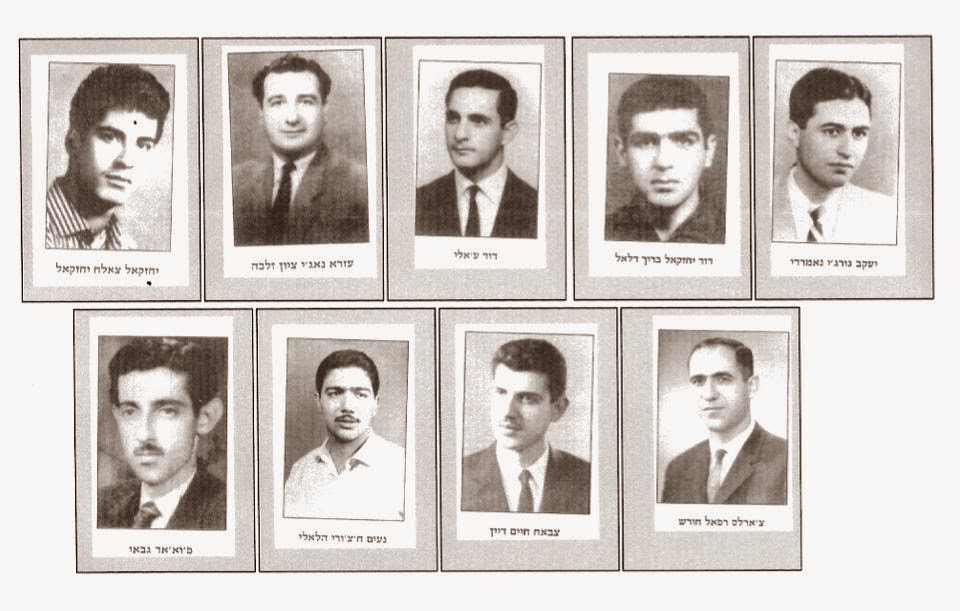 Of the nine Jewish 'spies', four were under the legal age for execution. A tenth, Jamal Hakim, also underage, had a Jewish father.

Holocaust Memorial Day coincides with the day in 1969 when nine Jews were hanged in Baghdad. The Germans have done much to show contrition for the Holocaust. When will the Iraqis apologise? Lyn Julius blogs in the Jerusalem Post:

Forty-five years later, the community and its representatives are still reeling with the consequences of that fateful day.


Following the defeat of Arab armies on all fronts by Israel in the 1967 Six Day War and the 1968 ‘war of attrition’, the 3,000 Jews who remained in Iraq following the mass migration of the 1950s were being singled out for vengeance by the Iraqi regime. Dozens of Jews had been arrested and imprisoned. The remainder were placed under virtual house arrest. One Jewish girl remembers that secret service men installed themselves in armchairs opposite her house in order to keep her family under 24-hour surveillance. The tension was such that she and her mother made a suicide pact.
Jewish bank accounts were frozen. Jews lost their jobs. Jewish students were not allowed to pursue their university studies. Foreign trade agencies were taken away from Jews and handed over to Muslims. Telephones were cut off. There was no escape: Jews had to carry yellow identity cards and could not obtain the necessary passports in order to leave the country. They were virtual hostages to the regime.
Antisemitism intensified with the rise to power of the Ba’ath party. Saddam Hussein was its deputy leader. Before long the regime had concocted a story of ‘Zionist espionage’. The stage was set for a show trial of unspeakable cruelty and cynicism. Of nine Jews falsely accused of being Zionist spies, four were under the legal age to face execution. No matter – the regime falsified their ages. Five other victims were Christians and Muslims.
Morris Abdulezer, an Iraqi Jew now living in Canada, describes the lead-up to the hangings:
“These innocent men were tortured then put through a televised mockery of a military trial, which culminated in nine of them being publicly hanged, one acquitted.

“I can recall precisely how terrified and confused we were throughout the entire trial and, more precisely, the night of January 26 when the guilty verdict was announced by the military judge. We did not believe that the sentence of death by hanging would be carried out because the whole court process did not make sense, from the defendants who were not allowed to appoint their own lawyers, to the stories and accusations that were outrageous and full of lies, where the defendants were being asked to bear witness against each other.
“We waited in fear, praying and trusting in our Jewish faith and hoping for pressure to come at the last minute from the international community to end this mockery.”
But when international pressure did  come - it was too late.
The reign of terror continued. Iraq’s rulers promised that there would be further hangings. Every citizen was urged to inform against their Jewish neighbours.      Linda Menuhin, a columnist living in Israel recalls that her own father was abducted on the eve of Yom Kippur 1972 on the way to the synagogue:  “We don’t know what happened to my father exactly. Until today we have never said Kaddish for him.” Her search for information on her father is now the subject of a film, Shadow in Baghdad.
Raphail Soffer was a small child when his father was arrested on trumped-up charges and executed in Abu-Ghraib prison in Baghdad on 25 August  1969. He was one of around fifty Jews executed, abducted, or who simply vanished without trace. While the hangings triggered the mass illegal departure of the remaining Jews, Raphail’s mother could barely feed her children, let alone hand over bribes to the authorities, or pay Kurdish smugglers to spirit the family over the northern border into Iran.
During the Iran-Iraqi war in the 1980s, Raphail was among 13 Jews conscripted into the Iraqi army. He was one of just 20 men out of 120 in his artillery unit to survive the war. Raphail, his mother and his two sisters, one of whom was mentally disturbed since being beaten aged three over the head by her teacher, had to wait to leave Iraq until Jews were permitted passports in the 1990s.
The advent of ‘democracy’ in Iraq has changed little for the Jews. Iraq is no safer for Jews or less hostile than it was.
There is much unfinished business. The Iraqis have never acknowledged their responsibility for the suffering and forced exodus of 150,000 Jews, the country’s most ancient community. The government has never compensated them for confiscated property. The World Organisation of Jews from Iraq, based in New York, has made repeated calls for information on Iraq’s 'disappeared ones’, without success.
A current source of friction is the fate of the so-called Jewish archive. In June 2014, the US is committed to returning to Iraq - and not to its exiled rightful Jewish owners -  thousands of documents, books and Torah scrolls seized from the Jewish community and shipped to Washington for restoration. The Iraqis claim the archive is part of their national heritage. Although only five Jews still live in Baghdad, post-Saddam Iraq says it tolerates minorities and values their contribution.
While the events of 27 January 1969 in Baghdad cannot remotely compare to the enormity of the Holocaust - the impulse for both was the same: man’s inhumanity to man. There the similarity ends. The Germans have done all they can to show contrition for the Holocaust. When will Iraq issue an apology to its Jews?
Read blog in full

yOU ASK THE QUESTION/WHEN WILL THE iRAQIS APOLOGISE,?
i DO NOT THINK THEY WILL EVER DO SO;
wHAT ABOUT eGYPTIANS,apart from the hangings in Iraq, lots of young men and women went to these smelly jails in the middle of the desert.And apart from one or two, none want to speak about what happened there
Hatred of Jews in ARab lands is widespreadvery honestly, it is not going to end very soon.
sultana