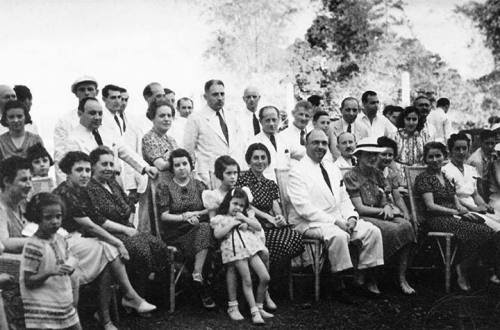 Jews from Egypt exiled in 1948


Following Point of No Return's post on the 'apartheid' rules which discriminated against Jews in Iraq, I am putting up (inspired by our reader Sultana) this 'companion post' on Egypt's discriminatory nationality laws. This discussion about Jewish nationality rights in Egypt first arose on the anti-Zionist site Mondoweiss.

An article by Shayna Zamkanei had asserted " it is the case that Egypt did it’s level best to reduce its Jewish population to a status almost akin to that of statelessness."

A commenter called 'Hostage' disputed this:

"Nice try, but it’s not true. The 1926 Egyptian Law defined an Ottoman as a subject of the Porte on the eve of the 1923 Treaty of Lausanne (article 1). By law, any Ottoman subjects living in Egypt on or after 5 November 1914, up to the time the 1926 Decree came into force, was considered an Egyptian National de plein droit. See Gianluca Paolo Parolin, Citizenship in the Arab World: Kin, Religion and Nation-state, Amsterdam University Press, 2009, page 80)."

In theory this was the case. In practice, non-Muslims from other Ottoman provinces (Jews, Greeks, Armenians and Syrians) were denied Egyptian nationality. An increasingly racial concept of Egyptian-ness began to be applied from the 1880s onwards.

'Hostage' asserts: "Article 7 of the 1929 Egyptian Citizenship Law allowed persons born in Egypt who permanently resided in the country to claim Egyptian citizenship at the age of majority."

But Article 6 gave preference to Arab Muslims. (Shimon Shamir, 'the Evolution of the Egyptian Nationality Laws and their application to the Jews  in the Monarchic period', in his book 'Jews of Egypt')

One would have expected that 40,000 eligible Jews would have acquired Egyptian nationality, but only 5,000 actually did. It was not compulsory, and some did not actually bother to apply. But the main explanation  is that most Jews 'found it exceedingly difficult to do so after the convention of Montreux in 1937 when Egyptianisation intensified '(Michael Laskier, Jews of Egypt, p 9).

Furthermore, the poorer classes could not afford the fee of five Egyptian pounds. Those who did opt for Egyptian nationality during the  1930s and 1940s  encountered innumerable obstacles in connection with the Nationality Law of 1929. It was difficult to prove that their families had resided in Egypt since 1848 due to the absence of proper registration.

Paradoxically, the most Egyptian of Egyptian Jews had the greatest trouble establishing their status ( p.63, The denationalisation of the Jews of Egypt by Ruth Toledano Attias in S. Trigano' s  "La Fin du judaisme en terres d'Islam").

Our friend  'Hostage' argues that "the subsequent laws adopted after the Mixed Courts were abolished in 1949, didn’t even deprive Zionists of the citizenship unless they were convicted of treason. (See Gianluca Paolo Parolin, Citizenship in the Arab World: Kin, Religion and Nation-state, Amsterdam University Press, 2009, page 81)

"That means the large number of Jews who held foreign passports and the stateless Jews had not been 1) habitual inhabitants before 1926, 2) Ottoman subjects before 1923, or 3) born in Egypt."

This is false: only some 25 percent of Jews held  foreign passports which were not easy to come by if you were poor or lower class. Some 75 percent of Jews were either native to Egypt or had moved there from other parts of the Ottoman empire.

Egypt was removed from Ottoman control circa 1798 by Napoleon, and never came back to it. France was followed by Muhammad Ali, an Albanian originally in the Ottoman service who betrayed the Ottomans and took over Egypt for his own domain while never formally repudiating Ottoman suzerainty. The British took over circa 1880 and "independence" under the UK occurred in the 1920s. That's why they referred to Ottoman subjects.

In the 19th century Euro states such as France and UK wanted to have Middle Eastern take their nationality for their own ifmperial purposes, while locals who were dhimmis wanted it in order to obtain more freedom, rights, freedom from harassment of dhimmis.

when you write 75% of the Jews in Egypt were either native Egyptians or had come from elsewhere in the Ottoman Empire, you suggest that as many as 25% of the Egyptian Jews were Ashkenazim. I think that percentage is too high for Ashkenazim, even though most Jews in Ottoman-ruled Roumania were Ashkenazim and some may have gone to Egypt. That country was under Ottoman rule up to 1878.

Be that as it may, it surely seems that this "hostage" person is ignorant of the reality of the situation and is relying on formal legal provisions that were carried out only in a discriminatory manner. Which apparently the British did not object to.

Can we teach people to always be skeptical of formal laws being applied in practice -- even in Western countries? Of course in the case of "hostage" he is really trying to whitewash the Arabs/Muslims.

Just want to add that both Karsten Niebuhr in the 18th century [circa 1778] and Edward Lane circa 1836 when his book on Egyptian customs was published write that Jews were persecuted and harassed in Egypt while the country was wholly under Muslim rule.

O.K. point made!
The picture you gave show clean and well)-dressed families. BEsides they are also beautiful
One day someone asked me: How do they (the Arabs)) know you are Jewish and
i reply humoistically:
We are more beautiful, intelligent, educated!
It is true!
sultana