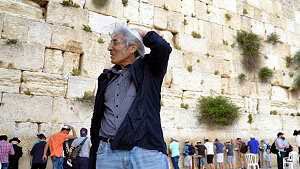 
Professor Robert Wistrich is fuming about UNESCO's cancellation of its Israel exhibition after two years in the planning. But equally furious is the Algerian writer Boualem Sansal, whose letter to Irina Bokova, the UNESCO Director-General, I have translated below. Sansal's condemnation of UNESCO's decision is all the more courageous because he still lives in an Arab country. (With thanks: Ahuva)

"I am sending you this letter to tell you of my surprise and discomfort following your decision to cancel the exhibition " 3500 years of ties between the Jewish people and the Holy Land ".

"Your honourable institution actively participated in its preparation and agreed to host it at its premises at its headquarters in Paris. The cancellation has strengthened my decision and my pride in being part of the Honorary Committee of the exhibition alongside such eminent personalities as Elie Wiesel, Esther Coopersmith, Father Patrick Desbois, Lord Carey of Clifton and Mr Irwin Cotler.

" It seems that your decision was taken at the request of the Arab Group at UNESCO. They considered that such an exhibit would harm the peace negotiations and efforts by the U.S. secretary of State John Kerry, and undermine the neutrality of the UNESCO. I personally find it hard to believe that cancelling a cultural exhibition at the world headquarters of Culture and Science promotes current peace negotiations. This is at the very least to prejudge the content of the exhibition, and it surely introduces an additional hurdle to negotiations. The cancellation can be seen as a boycott and therefore adopting a political position.

"As a writer, my weakness is to believe that free expression is peace, it is the exchange of ideas, the dialogue with the Other, and as an Algerian, I know how the lack of democracy in our Arab countries prevents peace and breeds violence. Putting out the fire in one's house, it seems to me, is more urgent than firefighting cultural exhibitions across the world.

"It is to have a narrow view of neutrality to demand that an institution have nothing to do with the Other. Neutrality means nothing; an institution like UNESCO does not have to be neutral: it must let everything and everyone see and be seen. A dialogue based on each and every individual reality can start and  be profitable.

"The Arab Group can now celebrate its victory: it got an exhibition cancelled for exposing the Other. This suggests that far from being objective and neutral, UNESCO is being partisan. Now let's hear about the lack of democracy in these countries which in the last three years alone has caused hundreds of thousands of deaths.

"I'm sorry, Madame Director-General, to see you complicit in an affair that ultimately harms everyone's name.

Is Nazism resurgent in Egypt?
Posted by bataween at Tuesday, January 21, 2014

The Arab argument that the exhibit will undermine peace is completely false and misleading. The exhibit will do the exact opposite – it will support and enable peace by helping Arabs understand, accept, and make peace with Israel.

So, if UNESCO does not want peace in the Middle East, and if they want to support the Arab war against Israel, they should acquiesce to Arab pressure to cancel the exhibit.

If, on the other hand, they wish to promote or enable peace in the middle East, they should go ahead with the exhibit. True and lasting peace has a much better chance when built on historical truth and respect for other cultures than on hateful propaganda and denial.

Alternately, they could ignore the politics of it altogether, and run the exhibit as a historical and culture event. Cancelling the exhibit is not neutrality--but taking sides; choosing politics over history.

It really sounds to me as if the leader of the Arab group is threatening: If you don't stop the exhibit, then we will make trouble!