A Jew in Saddam's army 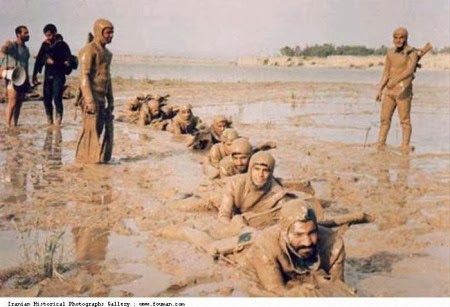 Soldiers crawl through a swamp during the Iraq-Iran war

One of 150 Jews then living in Iraq, a young dental surgeon named Eliyahu served in both the Iran-Iraq war (1980 -88) and the Gulf war (1990 - 91) - on the Iraqi side. At one point he was plucked from the jaws of death. Here's an extract from his story of hardship and heroism, as told to the Sephardi Bulletin (September/October 2000):

As a Senior House Officer and Registrar at Basra general hospital (during the Iran-Iraq war), Eliyahu found himself assisting in complicated surgery to the face and jaws of injured soldiers. Conditions were primitive and standards of care abysmal. Dressings were infected. Eliyahu took on feeding and nursing his patients himself.

Because of their injuries, the patients jaws were locked together and they could only take liquids. The nurses cared more about the liquidiser breaking down than about the welfare of their starving patients. The matron tried to undermine Eliyahu and after a row she deliberately broke the liquidiser. He repaired it. Later, when the war was over, she apologised for her misconduct.

In 1990, just when Eliyahu was about to leave for England to study for an MSc FDS, having won a scholarship, fate thwarted him once more. The Gulf War broke out  on 2 August  following Iraq's invasion of Kuwait. Eliyahu went back to Basra Hospital and in November was called up to the army. He was based only 50 km from the front line and subject to regular American and British bombing raids. He introduced himself to his Iraqi major as a Jew. "We are fighting Israel (Saddam had fired several Scud missiles at Tel Aviv - ed)   and they send me a Jew?" the officer exclaimed.

Food and water were desperately short and starving soldiers would break into the military food stores. The doctors had to make do with whatever came their way. Eliyahu used an old car battery to make a radio work. Eliyahu wore his old uniform from the Iran-Iraq war and his old boots. He had no helmet but managed to lay his hands on a gas mask belonging to an escaped Kurd.

There was no electricity. "I will bring you light. Buy me five candles," said Eliyahu. The soldiers thought he was mad. As he used to do with his grandmother's Friday night candles as a child, he recycled them continuously by melting the wax and made a wick in a porcelain cup.

One day he found the candles in a dustbin and the porcelain cup shattered into pieces. A Shi'ite officer watched Eliyahu retrieve the candles from the dustbin. Painstakingly he glued the cup back together, piece by piece. "Now I know why you are called the chosen people," he said admiringly.

Eliyahu had the chance to escape with a Sunni doctor friend but decided against it." He's a Muslim, I'm a Jew," he reasoned. He thought of his family, who had not heard of him for months." If I die I am one and they are four. If I escape, Lord knows what terrible things would happen to them."

Worse was yet to come. Eliyahu was needed at the Basra military hospital. He was driven there one night  of heavy allied bombing: the driver became confused, switched off his headlights but continued driving. Eliyahu could only see the blackness of the night and the fire of the bombs. He was sure he was going to die. The last thing he remembered before being knocked unconscious was reciting the Shema and the verse said on Yom Kippur: Haya, Hoveh Yihieh (God was, is and will be).

Later Eliyahu learned how close he had been to death. His commander told him:"You have Heaven on your side!" I was informed that the ambulance carrying you was bombed. It turned over. I pulled you through the windscreen. You were unconscious, bleeding. I put you in a lorry to take you back to our unit. An officer doctor examined you. He said you were dying."

Eliyahu was placed with the other bodies. The soldiers buried them one by one. But just as the orders were given to lower Eliyahu into his grave,  the soldiers noticed his toes twitch. "This is a message from heaven,"they told the commander,"Please lift him out."

The commander rushed Eliyahu into intensive care. When he came to, he was puzzled : why was he in the hospital where he used to work? He began recall the events leading up to his black-out and examined himself for fractures. There were none. "Mash'allah ( Allah protect you), said a nurse, watching him get up and leave the room. He had been unconscious for two hours. For a week he had no memory as a result of concussion to his brain.

In hospital there was no food, no water - except for some oranges which a girl he had previously helped in the hospital brought him. Eliyahu survived by drinking intravenous infusion fluids.

Eliyahu's adventures were, however, far from over. He managed to escape to Baghdad with some Palestinians who had been captured by the US in Kuwait. At first they refused to take him but a Sh'ite doctor friend threatened the driver:"If you don't take my friend I will shoot your tyres."

The Gulf war had ended. Iraq was defeated, but now it was in the grip of civil war between the Shi'ite majority and the regime. The Americans had bombed all the bridges and there were pockets of fighting everywhere. On the road to Baghdad the bus came under fire. A journey that should have taken seven hours took two days. The passengers had no food, only suspect water and disgusting soup. Eliyahu had to share with a soldier his spoon.

In September 1991 Eliyahu finally left Iraq. He now lives in the UK.
Posted by bataween at Sunday, January 26, 2014

wow, you did it again! - what a fantastic story - so well written and engaging! thank you!

Please, If any person knows Dr.Eliyahu, tell him this Dr.Sa'ad Fadhil, who trained him at Al-Rashid military hospital in Baghdad during 1985. I am now living there and he can contact me via my face book page ( Saad Alsalihi ) titled as (Poet).