Why Iraq claims what it does not own 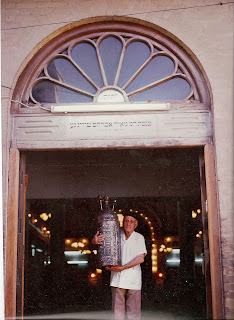 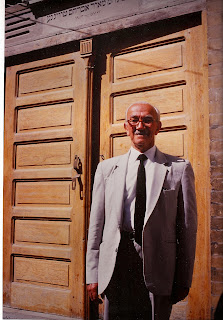 Much of the archive was seized from the Meir Toeg synagogue in Bataween, Baghdad, by Saddam's henchmen. Richard Z Chesnoff took these photos in 1989 for US News and World Report. (Top and middle) The late synagogue gabbay,  Abraham Sofer, holding an ornate Sefer Torah; standing in front of the Ark. (Bottom): Community president David Reuven outside the synagogue, opened in 1942. Sofer had returned to Baghdad from London to reclaim property seized by Saddam Hussein. He never succeeded, and not being able to leave, spent his last years at the synagogue. (All photos c. Richard Z. Chesnoff)

The Iraqi-Jewish archive is not like material taken from national museums:  Iraqi Jews are its official heirs and the premise on which the US undertook to return the archive to Iraq is entirely flawed, according to JJAC executive vice-president Stan Urman. David Andleman of USA Today reports:

The Iraqi artifacts were liberated from four feet of water and mold in the basement of Mukhabarat headquarters by American troops not long after their arrival in Baghdad in 2003. Deteriorating and badly maintained, they were immediately spotted by U.S. experts as a remarkable find and shipped back to Washington for restoration and preservation. But not before a pledge by the Americans that they'd go back to Iraq, not their owners, at some appropriate time. That pledge was made, of course, to the interim government the United States had installed. Now there are new individuals in charge. But the time for the archive's return is now drawing near.

"The entire premise is flawed," says "Stanley Urman, executive vice president of Justice for Jews from Arab Countries. "These were never Iraqi heritage materials, never the property of the Iraqi government. They were seized and looted from synagogues, schools, hospitals, private homes." In many cases, the owners relinquished them only to win their freedom. "They were allowed to leave [for Israel] only if they gave up their passports and all their worldly possessions," Urman continues in an interview. In short, it was part of the systematic destruction of what was once among the most vibrant and thriving Jewish communities in the Middle East.

At the end of World War II, there were more than 130,000 Jews in Iraq—a quarter of the population of Baghdad. By the time of the Six Day War in 1967, that number had dwindled to barely 3,000. Today there are at most seven Jews left — each fearful even of disclosing his identity — indeed not even a minion, the minimum number (ten) required for Jewish worship. But abroad, they constitute an enormous community, united under the banner of the World Organization of Jews from Iraq, according to its president, Maurice Shohet who himself fled Iraq in 1970 at the age of 21. The largest single Iraqi Jewish community, outside of Israel, is in the United States. And this is where the Iraqi diaspora wants these artifacts to remain.

Just why the Iraqi government wants these items returned is an open question—likely a pastiche of the public position authorities have expressed to Urman, that it wants to showcase the "contributions of the Jewish people to Iraq," and the reality that they are aware of their enormous and unchallenged value.

"From our point of view, they were taken from us and as a result we are the official heirs of the material," Urman observes. "This is not like material looted from national museums. It was taken by force by intelligence agents."

And now, some substantial force is being brought to bear on their behalf. On November 13, a bipartisan group of 47 House Democrats and Republicans signed a letter to Secretary of State John Kerry urging the State Department to "facilitate the return of these items to their rightful owners or their descendants, and not to the government of Iraq." Why? "The government of Iraq has no legitimate claim to these artifacts," the letter concludes.

But there is a larger issue at stake here as well. Across the Middle East, shards remain of once thriving Jewish communities — each with its own history, its own relics and its own documents. Only rarely are these artifacts carefully preserved or displayed. Cairo's Jewish community has shrunk from more than 100,000 to barely 100, with every Jewish school, hospital and club shuttered. Moreover, Urman says, few of its rich collection of artifacts are on display — most held in basement storerooms of a museum.

Read article in full
Posted by bataween at Sunday, December 15, 2013