Where we went wrong with Mandela 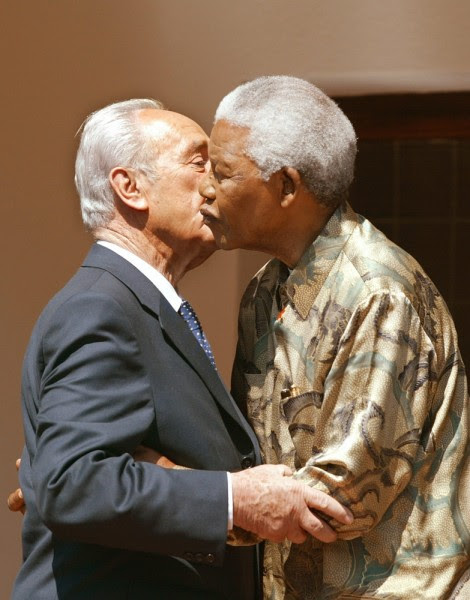 How could Nelson Mandela have applied his legendary moral clarity to the Middle East, when Israel's own leaders kept him in the dark? Instead of asserting the rights of an indigenous, colonised Middle Eastern people, Israel allowed itself to be guided by crass pragmatism. Must-read article by Ari Soffer in Israel National News:

It is indeed ironic that whereas Mandela fought for the rights of the indigenous people of South Africa, when it came to the Middle East he sided with one of the groups which has always stood at the forefront of the push for Arab colonization, the Arabization of other indigenous nations and the eradication or appropriation of the legacies of non-Arab peoples.

And if any more proof were needed of his moral failure when it came to the Middle East, there was his friendship with former Libyan dictator Muammar Gaddafi, which he once defended by proclaiming that "those who feel irritated by our friendship with President Gaddafi can go jump in the pool."

Again, the irony of that relationship was not simply that Gaddafi was a monstrous violator of human rights, but more specifically that he too was a key figure in the Arab colonialist project, who systematically sought to wipe out the Amazigh (Berber) people who are indigenous to northern Africa, and who ethnically-cleansed the entire Jewish population of Libya.

So, yes, Mandela was far from the infallible, universal icon of human rights he has been portrayed as. But instead of attacking him or seeking to deny the facts, we should ask ourselves two questions.

Firstly: why do we care? Mandela fought a just war against the forces of apartheid, but that did not make him infallible, and nor did it somehow confer upon him the kind of demi-god status which so many accolades attributed to him. He was a man - a great man, no doubt - but a man nonetheless. And men get things wrong. He fought for African rights in Africa, but what did he really know about the Middle East? His silence regarding the ongoing slavery of black Africans in Arab states, and the deeply-embedded racism within Arab society at large indicated that he knew precious little about the region.

But secondly - and more essentially - we must ask what drew Mandela to the likes of Yasser Arafat and Colonel Gaddafi in the first place.

Ever since Mandela passed away we have been seeing on TV films dedicated to his life. None of the three give a similar version!
Personally, Mandella was one of my very favourite people;
If we look deeper into the matter we will see that the role played by AFricanners was mainly due to people of European origins and also of British descent. Therefore it is normal that Mandela preferred those who opposed the Brits and their partners.
i have come to hate the Apartheid system and its exactions to other human beings. it was closer to Nazism than anything else.
When we see what humans can do to other humans you cannot approve their system
sultana

What went wrong with Mandela? That's quite simple: There was no "legendary moral clarity" in that man, he was just a very radical, but pragmatic Marxist. Gaddafi, Arafat, Fidel Castro, his communist party, his deal with David Rockfeller...

What bugs me the most is that Shimon Peres, someone almost as amoral and pernicious as Mandela will also be treated as a saint when he finally dies. And they'll use his death as a way to push his (lack) of ideas even further.

It's amazing how the press and the political elites love necrophilia.

"i have come to hate the Apartheid system and its exactions to other human beings. it was closer to Nazism than anything else."

This is mind blowing. The Apartheid could be compared to the US in the time of racial segregation but nothing more than that. Want something close to Nazism? Try Sudan, Japan in Korea and China, Iraq and Kurds...

Sorry to disappoint Anon2 but South African apartheid was much worse than the racial segregation --called jimcrow-- in the United States up to the 1960s. Here is a description of the real apartheid:

The good thing about democracy is that we agree to disagree.
Thank God the USA has changed for the better.
I studied at AUC and graduated from there and consequently have lots of AMerican friends.
And let me tell you, who seem so angry:
Only fools never change their minds
sultana vidal
PS it is easy to hide behime anonimity.

Sultana,
We're all anonymous here. Exposing my name would make no difference... If one can't face the consequences of his words and actions it's pretty much the same thing. "Sultana" means as much to me as anonymous means to you...

Eliyahu
I stand by my previous statement. Obviously there aren't exact matches and I'm not claiming it was the same -- even the same concept, like the laws of dhimma, were radically different during the caliphates -- but if we're trying to draw a parallel, apartheid is much closer to America's segregationist period than to the Nazi regime.


thanks for your explnation. I'll try not to forget when I see white men beat up black people

Sultana is my real name!
My mother refused to call me that and dubbed me Suzy.

Who said that? I think a French philosopher.
sultana