It's here, it's there, it's penetrated the heart of Jewish life. Zest, a Sephardi Kosher restaurant at London's gleaming new Jewish centre, JW3, has been discombobulating Britain's leading (Ashkenazi) food critics, displacing the artery-hardening fare of their ancestors with sunny, vegetable-rich, healthy dishes.  Zest's food may not be what bubba served up, but the critics have to concede: it is mouth-wateringly delicious...

Jay Rayner offers up this taster in The Guardian:

Something terrible has happened to my people. They have lost their way. It's worse even than that whole 40-years-in-the-desert thing which, in any case, was just a map reading issue. This is about sense of identity. It's about the very essence of what it is to be a Jew; or at least a north west London Jew like me whose forebears came from that bit of Eastern Europe, where a pogrom was the nearest anyone had to a spectator sport and the menus were written with the bitter winters in mind. 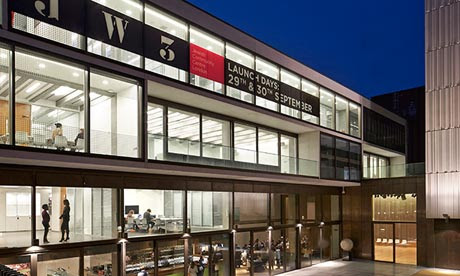 Yes, it's all to do with dinner. For decades being an Ashkenazi Jew in London meant going nose down in lumps of salted meat, boiled to a point whereby you could eat them without a full complement of teeth. It meant pucks of shredded potato and onion that have taken a long, shameless bath in the deep fat fryer. There were pickled bits and dirty notions involving large amounts of chicken fat. Oh the things we could do with chicken fat. For decades this diet also held sway under the unforgiving, Middle Eastern sun of Israel, which isn't that surprising. Many of the original Jewish settlers were Ashkenazis. This was what they ate. It was who they were.

Do I need to tell you this food is truly awful? A Jewish cuisine? Don't be silly. It's nowhere near refined enough to be called that. The only people who should ever talk about a "Jewish cuisine" are French Jews showing off their new kitchens. If it emerged now as a food trend, public health officials would set up outreach centres in an attempt to nudge people away from a lifetime of ever-hardening arteries. But it's our food. It's my food. And I love it. 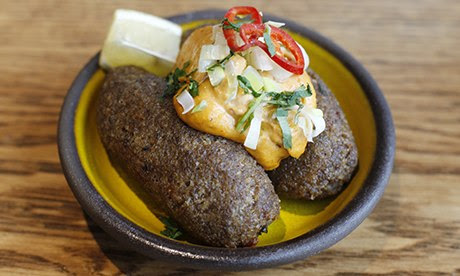 So what's gone wrong? I'll tell you what's gone wrong. The food of the Ashkenazis has been usurped by the food of their Mediterranean brothers, the Sephardim. Theirs is a culinary tradition full of sunlight and warmth and zest and life, rather than dead things and chicken fat. We've seen it in the dishes served at Ottolenghi and at Honey & Co and now it's at Zest, the thrilling restaurant in the newly opened Jewish cultural centre JW3, off London's Finchley Road. The chefs are north Londoner Josh Katz and Israeli- born Eran Tibi, both of whom previously worked for Yotam Ottolenghi, because it's the law that you must do so before setting up a restaurant like this. Quietly, unexpectedly – and without anybody bothering to consult me – Jewish food has become really, really good. Frankly, I'm appalled.

It all reflects a demographic and cultural change in Israel, which may once have been dominated by the Ashkenazis but increasingly has become a Middle Eastern country. Inevitably it is those flavours which now hold sway. Perhaps they noticed that the food of the Sephardim is simply much better suited to keeping kosher. The Ashkenazi repertoire is essentially the diet of the Slavic peoples minus the pig. Sephardic food is far less reliant on meat or butter. It focuses on vegetables, olive oil and occasional outbreaks of fish. Gastronomically, a lot of kosher Ashkenazi food is about compromise, to keep true to the imperative not to mix milk and meat. There is very little in the way of compromise about the Sephardic diet. The food is exactly the same as that eaten by the non-Jews in that part of the world.

I still remember with huge nostalgia my mother's stuffed courgettes and artichokes!
Not to speak of our Molokea (Jews' mallow). Then of course all our deserts. By the way these paved my way
to diabetes.Not forgetting what they now call 'le poulet à la juive'served with yellow rice with kernels
But all this has gone now. Middle Eastern cuisine by Mrs Rosen is a recipe book on all these edible delights. But nothing tastes the same because the way they grow things now is totally different.
sultana

The problem with that is that non Jews still think that Jewish food is European so Mizrachi food looks like 'stealing' from the Middle East, as Sara whatever her name was at the American university claimed. It will take a while before non Jews will learn that this is also Jewish food and Israel has always been a Middle Eastern country, so I have slight issue with the wording in this article. But I'm glad to see more Mizrachi/Sephardi culture around. I can't stand it when I'm in a group where the person organizing dinner (usually in youth groups) would go on about having for the Shabbat meal they are making, 'bubba's famous chicken soup' etc 'just like your mum makes' and I'm the only one shaking their head while everyone agrees enthusiastically because I eat something else for Friday night dinner. It's become the definitive Jewish food for some reason and it annoys me that people can't see past it. It's about time people learned that Jewish food is more than chopped liver and chicken soup. I was insulted when people at school asked me if my grandma made chicken soup, when I said no, they told me I wasn't really Jewish then *rolls eyes* like they knew anything about being Jewish. So I'm belittled as a novelty because that doesn't feature in my menu

Good point, Selina. The food of the Sephardim/Mizrahim is not EXACTLY that of the non-Jews of the Middle East. There are significant variations, ie no butter or yoghurt is used in Jewish meat cuisine, and there are Shabbat dishes like dafina and tbeet particular to the Jews. Some foods were introduced by the Jews of Iraq, and have become v. popular in Israel, such as 'amba' or mango pickle from India. The Jewish cuisine of Eastern Europe has held sway for so long in the diaspora because the Ashkenazim had an unchallenged cultural monopoly.

One interesting misconception held by Giles Coren is that Mizrahim did not end up in Israel as a result of recent persecution. Just shows we have still an important education job to do among Ashkenazim.

At least one dish is common to all Jewish communities because of the stricture of cooking on the Sabbath and the obligatory custom of having a warm meal despite not being able to prepare it on the Sabbath: http://www.jewishvirtuallibrary.org/jsource/judaica/ejud_0002_0004_0_04267.html

Bataween: Is it a matter of holding a cultural monopoly or just the result of demographics? If there were 12 million Jews living in Europe prior to the Holocaust, and roughly a million non-Ashkenazim living in the MENA, not accounting for the diasporas in North and South America and Australia/New Zealand, the non-Ashkenazim were outnumbered roughly 12:1 by the Ashkenazim.

An interesting question, anon. It can't be a matter of demography in the UK, where the Sephardim are a minority. Yet all the old Ashkenazi eateries offering salt beef and latkes have closed down and the Kosher fare available mirrors what you get in Israel, where there is a demographic Sephardi majority - ie. shish kebab, falafel, etc

Bataween: I guess I didn't make my point well. Ashkenazic cuisine was better known for years than the cuisine of middle eastern Jews largely because the Ashkenazim outnumber the non-Ashkenazim, prior to and since the Holocaust. That the cuisine of middle eastern Jews has become so popular is largely a function of Ashkenazic cuisine being passe (although it is experiencing a bit of a revival in suburban Toronto among the recent Israeli immigrants with eastern European heritage) and the small number of newly arrived Ashkenzaix immigrants to run those ethnic restaurants as opposed to the influx of Israelis who have brought the eastern Mediterranean style cuisine to Britain, the US and Canada.

I grew up in a kosher Jewish home in NYC with heritage from Russia/Poland diaspora. Everything my mother prepared was delicious, every Jewish deli and appetizer store a joy. Nothing was chewy, nothing tasteless. I thought how lucky I am to be a Jew. I pity the British writer and his terrible childhood but that's his problem…. not my experience nor my heritage.