Press: Jews are 'migrants', not refugees 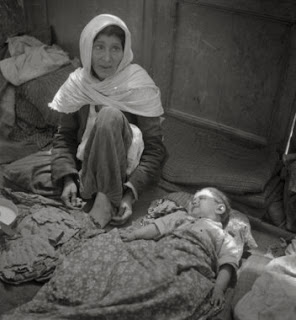 Are Jews from Arab lands 'migrants' or 'refugees' ? Journalism professor Ralph Negrine has studied the New York Times, the Manchester Guardian and the London Times between 1949 and1957, and has found that these newspapers consistently refused to refer to these Jews as refugees, despite some reference to the 'push' factors that drove them out of Arab lands. Read Professor Negrine's paper in the Journal of Media Studies (October 2013).

Although the NYT coverage does identify discriminatory practices and threats to the Jewish population, the coverage also contains some important comments that emphasise the fact that Jews were migrating rather than specifically being expelled.

On 6 March 1950, for example, it reported that Israel would need to re-think its absorption policy now that the Iraqi government ‘is allowing Iraqi Jews to leave the country within a year’ even though Jews would lose their citizenship and might not be able to take their possessions with them (NYT Israel in dilemma).

With conditions in Iraq becoming increasingly difficult, as the papers reported, the opportunity to leave created a mass transfer of population (seemingly with little physical coercion being brought to bear). Hence, the words that often accompany the tales of Jews population movement: ‘transfer’, ‘leaving’, ‘immigration’, ‘emigration’, ‘migrate’, ‘departure’, ‘exodus’.

On only three occasions in the 35 items referring to the displacement of Iraqi Jews was the word refugee used in relation to the Jews: two are general references to the movement of refugees (NYT Air-sea; NYT Iraqi Jews) and one in the headline ‘Refugees reach Tehran’ over a brief item that noted: ‘the attraction of resettlement in Israel had proved irresistible to the Jews who had been suffering from extreme poverty and, in such areas (as) Kurdistan, from violence perpetrated by Kurds’ (NYT Refugees).

In all three newspapers, the laments for the evacuation of the Jews from Iraq are
dominant motifs, as is the sense that they were leaving an increasingly difficult environment and being attracted by the foundation of the Jewish state. In these circumstances—and in the absence of a single overt act of coercion—it was probably difficult for newspapers to employ the ‘Jewish refugee’ label or the label of victimhood. And so, despite reports that the Jews had been discriminated against, made unwelcome, their property had been confiscated, their rights traduced and they were made unwelcome and possibly (forcibly?)encouraged to leave their homes, they remain truly ‘forgotten refugees’.
(...)


What conclusions can one draw from this study? The first point to make is that the coverage and the absence of a Jewish refugee discourse seemingly denies the experiences of individuals who were and continue to feel ‘exiled’ (Aciman). Are the Jews from Iraq or Egypt not deserving of the label ‘refugees’ or is the label not appropriate, given that their circumstances after their expulsion differ so significantly from, say, those of the Palestinians? What does this say about the condition of ‘exile’ or the status of refugees?

The second point touches on a theme that newspapers touched on but perhaps could have given a higher profile to, namely, the recognition that these migrations or expulsions were the beginning of the complete removal of Jews from Arab countries. The ‘pull-push’ nature of the migration must thus be placed in its proper historical context, a context in which Jewish communities were no longer able to exist in ‘Arab lands’.

Finally, this paper touches on the continuing importance of looking at newspaper coverage—and media coverage—as a way of exploring contemporary commentary on events, be they single or longer-term ones. This should not be taken to mean that journalism determines public and political attitudes and perceptions, only that it contributes significant elements to both. In the context of Jewish migrations, newspapers sought to describe what was happening to those communities.

They used particular ways to account for why the Jews from Iraq, Egypt and the Yemen migrated from those countries. Those accounts, as we have seen, rarely included the refugee word. One can only speculate on why this was so. Journalists respond to events and often there is a collective response as similar narratives are repeated. It seems that in the cases explored here, those narratives were predominantly about Jews migrating, Exodus-style, back to Zion. Their suffering—their experiences of being exiled and in exile—was less worthy of a mention.

Did those same papers even write about European Jews fleeing Nazi ruled areas of Europe as refugees a decade or so earlier? The NYT has a notoriously bad record for looking the other way during the 30s.

It's insane how these antisemites look at the fact that Arab governments expected their Jewish minorities to stay and be mistreated, and use this as an argument AGAINST calling the departing Jews refugees. That's like denying the East Germans who fled across the Wall were refugees.

Yes, part of the persecution was to stop them from leaving. That means they were hostages - actually worse than being allowed out of the country.

I have read Malka Shulevits' compendium of articles on the Jewish refugees. "Forgotten Refugees" or some such title. As I understand, several of the Arab govts wanted to get rid of the Jews and take over their property. So they wanted the Jews out. Maybe some others wanted the Jews to stay and be persecuted. This issue is not clear.