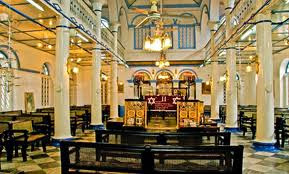 Mesmuah Yeshua synagogue in Rangoon (Yangon)...more than just a building

The last synagogue in Rangoon is a symbol of fast-diminishing religious tolerance, argues Michael Rubin in the Commentator (with thanks: Lily):

Voice of America picked up a fascinating story about efforts to preserve Burma’s (Myanmar’s) last synagogue:

The Mesmuah Yeshua synagogue is in a neighborhood typical of colonial Rangoon. Mosques, Hindu temples, churches, and Buddhist pagodas dot busy streets of markets, hawkers, and hardware shops. The protected heritage building dates back to 1896, and has been under the care of a member of the Samuels family for generations… Author and historian Thant Myint-U heads the Yangon Heritage Trust, an organization dedicated to saving Rangoon’s heritage buildings. He says the synagogue’s preservation effort is about more than just the building: it’s about recovering Burma’s past, to help people understand the city’s rich multiethnic history.

Religious intolerance is spreading across the Middle East and many places in Asia as populist and radicalized clergy urge their followers to make life intolerable for Jewish, Christian, Muslim, Hindu, or Buddhist minorities. Traveling over the years in Iraq, Pakistan, Syria, Yemen, Egypt, and Iran, I have heard older generations describe the cosmopolitan atmosphere of their youth, playing with friends of different religions.

Read article in full
Posted by bataween at Saturday, December 21, 2013

I do not want to harp at the fate of EgypItian Jews, but our Shaar Hashamaim (gate to heaven) was also voided of its Jews. Only a sshawish ( policeman), to guard it
I still remember our high feasts there!
sultana (a Jjewish refugee from Egypt°)