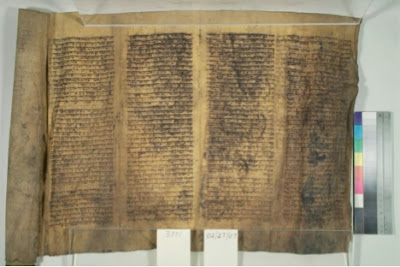 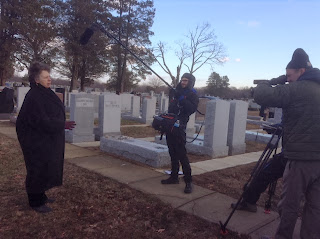 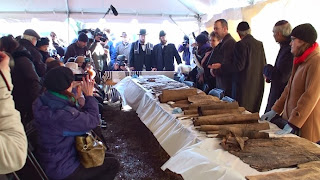 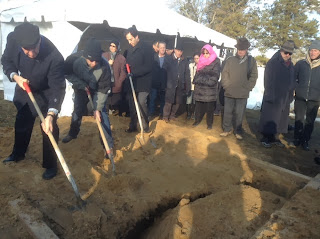 From top: A fragment of a Torah scroll. Doris Hamburg of NARA giving an interview. The fragments on view under a tent before their burial. (Photos: Edna Shohet; Lisette S)

On Sunday 15 December, representatives of the government of Iraq attended the burial of 49 fragments of Torah parchment in the Montefiore cemetery at the aptly-named town of West Babylon in Long Island, New York.

Five days earlier, a delegation of Iraqi officials transferred the fragments in sealed boxes from the National Archives and Records Administration (NARA) and delivered them to the World Organisation of Jews from Iraq (WOJI).

Some 25 representatives of the Iraqi government, the US State Department, NARA and the National Endowment for Humanities had been expected to join members of the Jewish community for a religious ceremony at the graveside. The fragments were set out on tables for viewing before burial in a casket.

The Iraqi delegation was headed by its Ambassador to Washington DC,  H.E. Lukman Faily. Several officials came especially from Iraq, representing the Ministry of Interior, the Ministry of Foreign Affairs, the National Security Council and the Council of Ministers.

Maurice Shohet, president of WOJI said: "We received many email messages from US officials following the religious ceremony. One of them wrote:“Congratulations on turning this very important page.  It has been humbling for all of us. It’s really an honor for us to be a part of this".

The fragments are part of the Iraqi-Jewish archive, shipped to the US for restoration by NARA, but too dirty and damaged to be restored. Mildewed fragments or whose smell 'cannot be eliminated' also qualify for burial.   According to Jewish religious law (Halakha) such fragments are no longer Kasher or fit for use.

WOJI had been engaged in delicate negotiations with the Iraqi authorities for months in order to get their agreement to the burial of these fragments.

The rest of the Iraqi-Jewish archive, however, is now the subject of controversy:  Iraqi Jews have joined Jewish groups and US congressmen to protest its projected return to Iraq in 2014.
Posted by bataween at Monday, December 16, 2013

Something about Jewish representatives taking part in a ceremony with Iraq govt officials does not smell right to me.

" the gift of an object like the Torah scroll to an appropriate institution in New York,

"Contested Patrimony: The Iraqi Jewish Archive
[Not to be cited without permission of the author]"

Well it's not fair , insn't it?
sultana

You probably don't need to worry... I assume that the Iraqis showered for this event!

It is strange that Iraqi Jews should participate in the destruction of their own heritage. Further, it is galling to see the spectacle of Iraqi diplomats taking credit "for respecting the history its Jewish citizens"

To me the members of WoJI who convinced themselves that they were doing the righteous deed of helping burying the archive were completely and utterly delusional.

These texts may not have been usable for religious purposes but they were without a doubt historical documents.

Who knows what would have happened in the years to come. These documents might have formed an important part of museum exhibits.

Lastly, these deluded members of the community forget that it is perfectly fine to not bury these texts. In fact keeping them where they are and even if they return to iraq is still perfectly fine as far as Halakha is concerned.