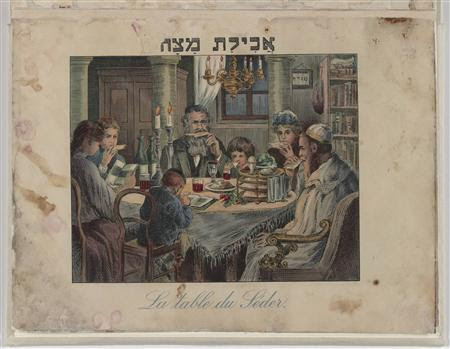 Page from a hand-painted Hagaddah, 1930s


Articles on the Iraqi-Jewish archive are being published, not just in the English language media, but in the Arabic press by Iraqi Jews. For example Kheder Basson, who lives in Israel, had this passionate piece published in Elaph, the leading online newspaper. The authors report that  reaction is mostly positive. One  talback calls for Jews to return to Iraq; another says that the plight of the Jewish archive is the plight of many Iraqis. Here is a potted English translation of Basson's piece. (With thanks: Maurice)

Iraq's Jews are all angry.... My friends in New York, Los Angeles, Toronto and Montreal, in London and Amsterdam, in Tel Aviv and Ramat Gan and Or Yehuda and Petah Tikva are angry about the possibility of the return of the so-called "Iraqi Jewish Archive" to Iraq.

They stole our lives, stole our childhood, stole our property and stole our memories. Our memories lay in the flooded basement of Saddam's intelligence HQ.  Blue ink flows from the pages of our memories in the stinking water and we have shed the blood of so many of our families and our friends. Our images, and our papers are cracked, our writings torn....

The Iraqi government wants to return to an Iraq without Jews, what Saddam's regime stole from the Jews of Iraq. Do you want to insult us? Do you want to partake in the theft ?


Is this issue a legal or moral one? Are you entitled to any government or authority to restore stolen property and personal files to non-owners or their representatives? Some have compared it to allies restoring paintings stolen from the Jews of Europe, by the Nazis, to Germany. But I say, after seeing some of what is in the archive that return would be most outrageous because we are still alive.

Yesterday I opened the first file under the classification of Shamash (Shamash prep school) and I was surprised by my name, Kheder Basson, on the first file - chemistry fourth grade. So in a moment I was transported back forty-four years to the school year 1969-1970, when I was a teacher of chemistry to fourth grade. I was in the final year at the School of Chemical Engineering at the University of Baghdad, when I was summoned by the headmaster of Shamash school, the late Mr. Abdullah Obadiah. He said, "I want  you graduates of Shamash to help me - Muslim and Christian teachers have left after being subjected to pressure from security or for fear of teaching in a Jewish school. I would like to borrow you to teach some subjects" I told him: "I am in my final year and I will try as much as possible to find the time for it."

It is ironic that officials at the Ministry of Iraqi Antiquities claim that this is Iraqi heritage. Is Mahmoud Abbas or Uncle Tom Cobley interested in access to our files and our certification, exam papers, awards obtained, a list of textbooks, Council resolutions or notes on discipline or ....... ? Except to us and our partners and our children and grandchildren who want stories passed on to them about our school or the history of the neighborhood, each paper means nothing. All my friends are expressing the same feeling.

There among the manuscripts that I've found record of marriages 1947-1949 where I could find the marriage record of my parents written in Hebrew script. My father was a trader in Iraq and the Levant.  Is it possible to return it to the National Library of Iraq?

The Iraqi-Jewish archive is not made of relics buried for thousands of years. It is not Sumerian, a Babylonian lion,  a Persian Abbasid statue or an Ottoman cannon. This is not the tomb of Prophet Ezekiel which became a Shi'ite shrine. ...This is not the  Iranian rug that we left at home while closing it up in the summer of 1973. It is not a game that my sister left her on her bed when she departed Iraq.


We thank all those Iraqi officials who let this archive out of Iraq to save it. We thank the U.S. government and the National Archives for their huge efforts in saving what can be saved and rehabilitating what can be rehabilitated.

The Iraqi government has a golden opportunity for a historic reconciliation with the Jews of Iraq. It must transcend its pride and abandon its demand for the return of what Saddam's regime stole from the Jews of Iraq. This archive represents only a fraction of what we had left in our homes, in our synagogues, in our schools. There is a chance to heal some of the wounds and restore to us - and we are alive - some of our memories. But an Iraqi government that has succeeded in getting back the stolen personal property of the Jews of Iraq would be complicit in Saddam's theft.

And what about imitating Samson?
Remember he was beteen two supporting columns and he said: "sur moi et mes enemies!"
Rather than give the archives back to Jew haters, blow them up!!!
Yes i feel you will raise your eyes to heaven and say: Is that Sultana going nuts?
sultana