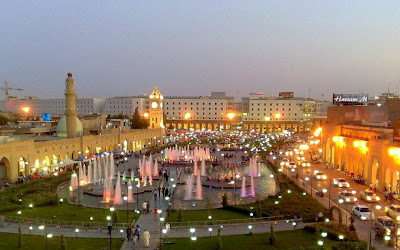 It was the first time in over 40 years that Emile Cohen and Niran Basson-Timan had been back to Iraq. The two London-based Jews were invited to a conference in Kurdistan on minorities. For many of their fellow delegates, Emile and Niran were the first Jews they had ever met. Emile Cohen describes his impressions:

Before we started we were apprehensive regarding our safety but we were
assured by the many friends who visited that there would not be any problems.  The name Cohen cannot sit easily in a place like Iraq.  We were also concerned about accommodation and kept asking questions about the standard of hotels. We were very pleasantly surprised at the standards in Arbil. The hotels were equivalent to  3-4 stars in terms of the rooms. We both stayed in suites.

The conference we attended was called Conference for the Friends of Bartalla.  Bartalla is a village or town in the area known as the Valley of Nineveh, a
sprawling town lying east of Mosul. It is one of the areas under dispute between Kurdistan and the central Government. Bartalla  predominantly consists of Christian inhabitants. I was under the impression that the conference was about the emigration of Christian minorities from Iraq, two-thirds of whom at least have had to flee to Europe and USA due to the oppression caused by Islamic parties and fanatics. It transpired that the main concern was the demographic changes in traditionally Christian areas that started at the time of Saddam through his policy of Arabisation and has continued since his adopting a more religious and sectarian outlook.

We were very well received by the organising committee and indeed we felt
that we were VIPs.  In the process we met many writers, intellectuals and
human rights activists from Iraq and also those coming from abroad,
Christians as well as Muslims.  We were the only Jews at the conference.

The opening of the conference was attended by nearly 1,000 people, including
the wife of the President of Kurdistan and a representative of the central
government. The attendance figure reduced later after the first half-day of
speeches was completed. A standard theme started by the first speaker seemed to repeat itself by practically all: that Iraq lost a most valuable constituent of its mosaic in the forced emigration of the Jews. Diversity and plurality were a feature of Iraq  and the loss of the Christian contribution would be heavily lamented, having already lost the Jewish constituent. Needless to say that the conference was predominantly made up of liberals, leftists and ex-communists in terms of political attendees; it was refreshing not to hear Bism Allah Al Rahman Al Raheem (the Muslim call to prayer - ed) before every speech.

Niran and I did take an active part in private discussions with people.  It was
clear that we were Jewish, and became a subject of fascination by many who
wanted to introduce themselves, take photos with us and tell us stories that
their mothers told them about the kind Jewish people next door. Most of them
had not seen Jews before and it became evident that Jews do not have horns
and tails. Every evening we were invited for dinner with 20-30 other people
and soon we made friends with many; we were given farewell presents and books from so many people that we needed an extra suitcase; even that was generously given to us.

We stayed for five days, two of which were spent in conference; during the
the rest we toured a little  in Arbil and nearby areas.  We purposely wanted to stay within Arbil as I was loath to venture into areas far away and take unnecessary risks on our first visit. I was invited to stay longer and attend a workshop the following weekend. I declined and was invited, together with Niran, for a minorities conference in Najaf in January and another in Dhok in April. I declined this as well, despite their assurances of protection.

I cannot speak for Niran but in my case I did not have any strong feeling
for the land itself because that part of Iraq I am not familiar with, as I relate more to Baghdad and Basra.  However we felt the strong ties we havewith the people and perhaps Iraq is its people rather than its physical characteristics.  Arbil is westernised in some aspects and at times it reminded me of Ramat Gan. However, they have a lot of buildings in progress and beautifully-styled houses.  In a year or two I can imagine it will be equivalent to a European city.  Certainly the malls they have are of a standard even more modern than Brent Cross ( a mall in North West London - ed).

All in all, we had a wonderful time and were treated very well.  Our
presence did create a favourable impact and had a positive resonance
although we did not partake in the discussions and speeches from the floor.

Niran adds:  "I also am not familiar with the north of Iraq but being with so many interesting people, the way we were treated and how everyone felt so comfortable in our presence, was fantastic."
Posted by bataween at Tuesday, December 10, 2013

What a different picture this attendee paints of post-Saddam Kurdish region than you get from the western media which focuses solely on the sectarian strife elsewhere in Iraq.

"[...] Bism Allah Al Rahman Al Raheem (the Muslim call to prayer - ed)." This holy phrase for Muslims means "in the name of the God most gracious most merciful." It's not a call to prayer as "Allahu Akbar" means. Its meaning explains well why would Muslims like to open up their speeches with this holy sentence. However, I'm glad that these 2 Jewish gentlemen could cost part of third country of origin. Politics can influence individuals to do certain things in a motivational way to achieve something controversial; this shouldn't happen because people are people regardless of their religions, colors, backgrounds, political affiliation and etc. As a Muslim, I wish my place of birth Iraq to return as it was before, a basket full of flowers. Each flower reflects a a distinct group of people. I don't want Iraq to be a place that devours its own habitants.