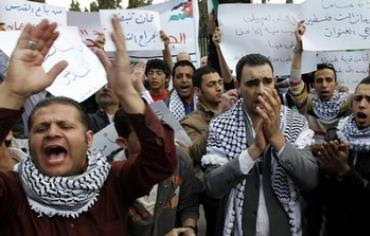 As the current negotiations between Israel and the Palestinians lurch forward, the burning question is: will Israel's withdrawal from the West Bank put an end to Palestinian claims? Israel's stance on obtaining Palestinian recognition for Israel as a Jewish state is not being matched by a robust approach on Jewish refugees, argues Lyn Julius in the Jerusalem Post:

Even if Israel is negotiated back to the 1967 lines, will the Palestinians renounce their 'right of return'?

This issue cannot be brushed aside  as 'rhetoric' : it is intimately bound with Prime Minister Netanyahu's insistence that the Palestinian recognise Israel 'as a Jewish state'. Addressing the Knesset recently, Netanyahu dismissed voices in Israel - among them his own Finance Minister Yair Lapid - arguing that PA recognition of Israel as a Jewish state was unnecessary: “The question is not why we are raising this point, but why the Palestinians continue to delay an agreement over this.”

Not content with getting a Palestinian Arab state in the West Bank and Gaza which they have already declared will be Jew-free, even 'moderate' Palestinians reserve the right to turn the Jewish state into a second Arab state, by overwhelming it with millions of returning Palestinian  refugees. The first act of such a Muslim majority-state would be to repeal Israel's 'Law of Return' which entitles Jews, wherever they may be, to automatic Israeli citizenship.

A peace deal foundered in 2000 because the Palestinians did not agree to the principle that their refugees should be repatriated to a state of Palestine. According to an Israeli TV scoop, the Palestinians in the current peace talks seem not to have budged an inch on their 'right of return'.

If successive Israeli governments did not insist on this point in the past, it is because Netanyahu has realized that the much vaunted 'two-state solution' leaves room for ambiguity.  A peace settlement requires 'two states for two peoples.'

On the matter of refugees, however, the Israeli government is being less reassuring. Here the question is not only about ending claims, but ensuring that refugees on both sides get recognition and redress.

Lest Livni be suffering from a bout of amnesia, let us remind her that the single largest group of refugees created by the Arab-Israeli conflict was not Palestinian. Almost a million Jews were forced out, not just from East Jerusalem and the West Bank, but Arab lands. Their pre-Islamic communities were destroyed and their property seized without compensation.  Although over 200,000 Jews were resettled in the West, two sets of refugees exchanged places between Israel and the Arab world. Half the Jewish population are in Israel not because of the Nazis, but the Arabs.

In its conduct of peace negotiations, the Israeli government needs to recall that it is bound by a Knesset law passed in 2010. This statute requires that,  as a matter of law and justice, recognition of the Jewish plight and compensation for seized assets many times greater than Palestinian losses must also be included on the peace agenda.

Only by balancing the claims of rival sets of refugees might a deal be struck: neither set should return to their countries of origin. Both should be compensated through an international fund, as proposed by Bill Clinton in 2000.

Historically, the Arab side initiated linkage between the two sets of refugees.  Arab states branded their innocent Jewish citizens as members of 'the Jewish minority of Palestine'.  Jews were conflated with Zionists - and became fair game for persecution. The result was the almost complete 'ethnic cleansing' of Jews from the Arab world.

Ironically, Arab leaders were the first to talk of an 'exchange of populations': but while they eagerly expelled their Jews, schemes to absorb Palestinian refugees in Arab lands were never carried out. The latter remain to this day bereft of civil rights, except in Jordan.

It is not enough for Benjamin Netanyahu to insist on 'two states for two peoples". The Israeli negotiators must display equal robustness on the question of refugees, and insist that an irrevocable exchange took place. Netanyahu's strategy must be:  two states, and two sets of refugees.

Reprinted at the Algemeiner

ddn't I say it was a never-ending story?
Somewhere, somehow the Palestinians are funded by a Muslim power to try and knock us out by all their demands!
sultana
PS who is funding them?

The claim has already been given up by those who fled to Jordan and no longer lay claim on that land.