The good news is that the story of the Iraqi-Jewish archive has reached the ears of the BBC, amid other mainstream media.  But that's as far as it goes. The BBC fails to mention the controversy over its planned return to Iraq. Instead of Harold Rhode, who first rescued the archive from under four feet of water, the BBC makes a heroine out of Doris Hamburg, a US National Archives senior archivist. The BBC never mentions that the archive was seized by Saddam Hussein from the Bataween synagogue, hinting that it was simply abandoned by Iraq's departing Jews. Instead of asking searching questions, the BBC dutifully conveys the message that the archive demonstrates how multicultural and tolerant Iraq was  - and has again become (!), according to Iraq's ambassador to the US. (With thanks: Jas)


A flood in a basement underneath the ruins of Saddam Hussein's intelligence service nearly destroyed centuries of history of Iraq's vanished Jewish community. Here is the story of the American archivist who led the effort to rescue the books and papers, enabling their display this week at the National Archives in the US capital.
Three months after the US-led invasion of Iraq in 2003, Doris Hamburg received a phone call from Baghdad.

US soldiers searching for weapons of mass destruction in the ruins of Saddam Hussein's intelligence agency in Baghdad had discovered a large cache of papers and books in a flooded basement. They didn't know what to do with them and needed expert advice.

As the person in charge of preserving historic documents at the US National Archives in Washington, Hamburg was used to urgent requests for help - particularly during disasters when valuable artefacts and documents were at risk.
But this was unusual. The tens of thousands of water-logged pages in the basement had nothing to do with US history. They were a record of Iraq's vanished Jewish community, including religious texts and public records - some of the last tangible evidence of a 2,500-year-old culture that no longer exists in Iraq. 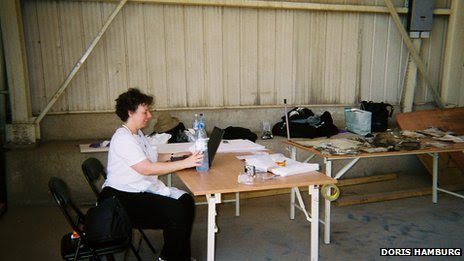 Arriving soon after the US invasion, Doris Hamburg drew on her experience at the National Archives in Washington to help rescue the Jewish documents
Rescued from the basement, the papers were laid out to dry in the sun and then placed in metal trunks. But in Baghdad's heat and humidity they soon began to rot.

With no time to waste, Hamburg flew to Iraq on a military plane. She arrived in June, when the official fighting had ended but the country remained unstable. Within a few months, it would descend into sectarian bloodshed.

"When we first looked at the trunks full of these books and documents, we saw that everything was distorted," she recalls.

"It was very mouldy, the smell was overwhelming and they were in poor condition. But we did have hope because we could see there was a way to preserve and conserve them and that they could be made available over time." 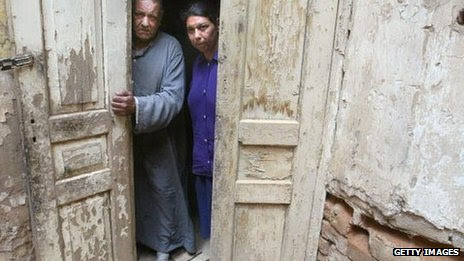 Amid the confusion and chaos of the early months of Iraq's occupation, Hamburg set up a makeshift office and laboratory in a freezer truck. The documents were frozen to stop further deterioration, and she was able to examine them more closely.

What she discovered was a time capsule of Jewish life in Iraq from the 16th Century to the 1970s - prayer books, philosophical texts, rabbinic commentaries, Israeli children's books, Torah scrolls, and tens of thousands of pages of records from Jewish community councils, synagogues and hospitals.

Some of the books were printed in Baghdad, others were imported from Jewish centres across the Middle East and Europe.

"Even today it gives me goose bumps," says Hamburg.

Much to my regret, we know of GB's preference.
It will take a lot of water under the Thames for it to change
sultana

Sultana: don't confuse the British public, who are largely more sympathetic to Israel and Jewish people with the BBC/Guardian/BDS lot, who are a strident vocal minority seeking the mantle of self-righteousness while they swallow wholecloth the bunk about Arafat being poisoned and ignore the wholesale theft of aid payments despite the supposed oversight of Salim Fayeed.