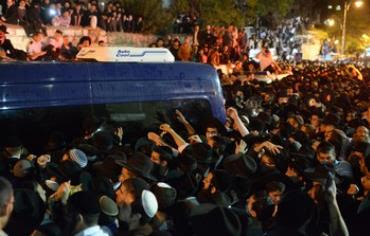 Hundreds of thousands turned out for the funeral of Rav Ovadia Yosef on 7 October (photo: Koby Gideon)


The funeral of Rabbi Ovadia Yosef brought more people out on the streets  than any in Israel's history; but Yosef was also derided as 'racist' and 'bigoted' by secular, 'liberal', Ashkenazim. Yet Yosef devoted his life to combating the very racism that the Ashkenazi establishment was guilty of towards Sephardi immigrants, argues Seth Frantzman in this thought-provoking Jerusalem Post piece. Furthermore, more Arabs have been known to vote for the 'moderate religious' party of Shas (of which Yosef was the spiritual head) than the leftwing Meretz. Granted, but how does Frantzman rationalise Yosef's own racist remarks? And how does he counter the charge that Shas itself mimics Ashkenazi (Lithuanian) ultra-orthodoxy?

Yosef's oft-repeated motto of “restoring the crown to its former glory,” meant restoring the crown of Sephardi learning, of the great centers of Talmud of old. Benjamin of Tudela, the 12th-century Jewish traveler, had recalled of Baghdad, where Rabbi Yosef was born in 1920, “there are about 40,000 Jews... and among them are great sages, the heads of academies.” The leaders traced their lineage to Moses and the house of King David, said Tudela. The leader of the community, called the “exilarch,” would go every fifth day to meet the Muslim Caliph, and “horsemen, gentiles as well as Jews, escort him... he is mounted on a horse and is attired in robes of silk with a large turban on his head.”

According to Benjamin “all the Mohammedan princes rise up before him” and they declare “the scepter shall not depart from Judah.” Benjamin claimed that Jews from as far as Ethiopia, Yemen and Siberia and up to the Oxus owed allegiance to the rabbis of Baghdad and he provided protection to them all.

Rabbi Yosef spoke of the “crown of glory” because he knew that glory in his youth, before the Farhud (pogrom) in Iraq in 1941, when Jews were 30 percent of Baghdad’s population and formed its professional class.

When he came to Israel in 1949 he found a country greatly changed from the one he had seen in the 1930s when he had lived in Mandate Palestine. Gone were 80% of the Arab citizens. Many hundreds of thousands of Sephardim were immigrating, some from Iraq where he was from. No doubt he witnessed as intellectuals from Iraq, men of learning, doctors and lawyers, were forced into barbed wire-enclosed camps by Yiddish speaking Jewish Agency officials, to be sent to “development towns” rather than kibbutzim, where European Jewish immigrants were allowed to live.

The socialist Zionist leaders called them “lumpenproletariat” and “human material” in need of being “forced to get used to physical work.” One witness noted; “The ma’abara [camps] with its numerous gleaming tin shacks crowded together around the stinking latrines seems like a wound in the flesh.”

Iraqi Jewish intellectual Sasson Somekh recalled being made to feel like a second class citizen. Prime Minister David Ben-Gurion claimed Sephardi Jewish immigrants like Rabbi Yosef “do not constitute a people, but a motley crowd, human dust lacking language, education, roots, tradition or national dreams... turning this human dust into a civilized independent nation with a vision... is no easy task.”

Haaretz writer Arieh Geldblum claimed that they were “people whose primitivism is unsurpassed... an immigration of a race the likes of which we have not yet seen in Israel...just one step above the level of the Arab, black and Berber inhabitants of their lands.”

Jewish Agency head Giora Josephtal complained about the “feral” nature of the men from Iraq and writer Amos Elon worried about the result their “uncontrolled fertility would have on the Jewish people’s genetic robustness.”

The Rabbi – who people deride as a “racist” – was confronted with a society that viewed Jews like himself as “feral primitives” and with socialist leaders who desired to “control their fertility.”

For years he struggled against the racist, segregatory nature of this society he and his co-religionists found themselves in; it was not the true Zionism, he argued, it had to be challenged. It was called a “Jewish state,” but how Jewish was it really, when half its Jewish citizens were considered “human dust” and “animals” by cultural and academic elites? When the leaders of the country denied Ethiopian Jews the right to immigrate in the 1950s and 60s, one of Rabbi Yosef’s first acts upon being elected chief rabbi in 1973 was to rule that Ethiopian Jews were Jews.

Maariv journalist Yuval Elizur had claimed in 1959 that bringing Ethiopian Jews would import a “racial problem” like in South Africa. Yosef saw in this echoes of how the state had viewed Sephardi Jews and he demanded the Ethiopian Jews be brought.

Menachem Begin agreed, one of his first acts in 1977 being to order the Mossad to help bring “my brothers” home. Yosef, like Begin, wanted a Jewish state for all the citizens, not just for members of a narrow, Mapai-voting elite.

But the hatred of Yosef and those like him never abated in Israel. In 1983 Shulamit Aloni, speaking to a Labor party gathering, declared, according to a New York Times article, that Mizrahi Likud voters were “barbarous tribal forces... driven like a flock... like a roll of tom-toms [drums] in a savage tribe.”

Hatred and unbridled racism towards Mizrahi Jews fed the vitriol of those who hated Ovadia Yosef, and those who, as he lay dying or after his death, called him “racist.”

Who was more racist, Ovadia Yosef, or those who called Mizrahi Jews “savages,” “primitives,” “human dust” and who recommended curtailing their fertility? Who is more “racist,” Ovadia Yosef who insisted that Ethiopian Jews have the right to come to their state just as German Jews did, or the leaders of Israel in the 1960s who said “we do not want a black problem?” Which is more “racist,” the Shas party that receives thousands of Arab votes from places like Jisr al-Zarqa, or paternalistic left-wing parties like Meretz? People impugn Yosef because many Israelis never internalized the need for a diverse society that celebrates all its people. If Yosef had lived in America he would have been celebrated as an innovator in religion (his rulings were more flexible than others on key issues of divorce and conversion) and a leader of a unique culture.

Ovadia Yosef was the closest thing Israel had to a Martin Luther King Jr., who demanded respect for his people and for other groups, like Ethiopian Jews. He found respect among Arab citizens, and those from other walks of life. His funeral was the largest in Israel’s history, befitting a man who was one of the greatest Jews of his generation.

Read article in full
Posted by bataween at Saturday, October 12, 2013

the Leftists as well as the HaArets crowd --Gershom Schocken, etc-- were imbued with German philosophy, which explains a great deal but not everything, obviously.