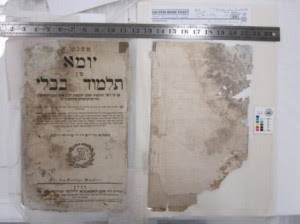 A page from the Babylonian Talmud

Since this piece in the Washington Jewish Week appeared,  agreement seems to have been reached to end the government shut-down delaying the opening of the Iraqi-Jewish exhibition at the National Archives in Washington DC. But the central issue remains: to whom should the archive be returned?

One of the consequences of the government shutdown is that the planned opening of an exhibit of Iraqi Jewish artifacts at the National Archives, “Discovery and Recovery: Preserving Iraqi Jewish Heritage,” is on indefinite hold.

Gina Waldman had wanted to see the artifacts — including a Hebrew Bible from 1568 — during her visit to Washington last week. As president of JIMENA, or Jews Indigenous to the Middle East and North Africa, she represents one of a group of organizations that doesn’t want the collection to be returned to Iraq.
“It’s very important to see it,” she said by phone. “We just hope that it isn’t sent back.”

The artifacts were discovered by U.S. troops in the water-logged basement of Saddam Hussein’s secret police headquarters during the American invasion of Iraq in 2003. There were thousands of books and documents that had been abandoned by a Jewish community that dated back to biblical times, but which fled the country in the anti-Semitic atmosphere following the founding of the state of Israel.

By agreement with the Iraqi provisional government, the U.S. transferred the collection to Washington, D.C., for restoration, digitization and exhibition. The government of Iraq says the artifacts belong back in Baghdad, and is pressing for their return. The U.S. has not disagreed with Iraq’s claim, but has not taken any visible steps to return the items.

Waldman argued that the artifacts do not belong to Iraq, because they were confiscated from Iraqi Jews as they fled the country.

“We are asking the U.S. government to intervene, to assure that this collection remains the patrimony of Iraqi Jews,” said Waldman, who fled with her family from her native Libya in 1967.

Just what returning the objects to “their rightful owners” means is unclear. Most of the Iraqi Jewish community lives in Israel. Some 15,000-20,000 Iraq-born Jews and their descendants live in the United States, largely split between New York and Los Angeles, according to Maurice Shohet, president of the World Organization of Jews from Iraq.

Shohet said his group’s first priority is to make sure the materials are preserved and digitized. They are also pursuing quiet diplomacy to prevent the artifacts from being sent back to Iraq.

Read article in full
Posted by bataween at Thursday, October 17, 2013

once more we realise how important is the US friendship for us. Anyone who does not understand that is doomed to go through all the horrendous situations of the past.
The archives are ours or not, that is not important: what is important is not letting Jew haters get hold of them and that is being done now with the help of the US. WEll done!
sultana

Where the books abandoned or confiscated or both? Or were they "abandoned" in the sense that Jews who left because they were stripped of citizenship also subject to a legal limitation on the assets they could take with them?

Both. The Jews were not able to take the books with them. The first waves of 1950s refugees would have been limited to one suitcase and 4o dinars in cash; the last wave of emigrants would have left illegally through Kurdistan with a minimum of possessions so as not to attract suspicion that they were leaving for good. There is no doubt that the abandoned books and documents were 'confiscated'/ seized from the Bataween synagogue where they would have been considered communal property.

It seems to me that our plight as Jews living in Arab lands is not known.
Not only were we not allowed books, but we were stripped of our Egyptian nationality (for my grandfather and uncles)
alllowed one suitcase and £10, and a kick in the you-know -what!!!
sultana