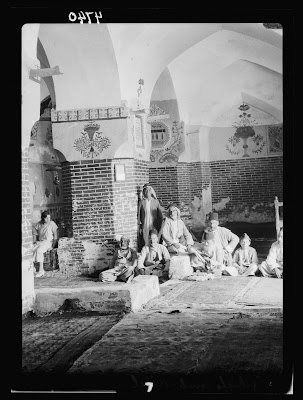 Inside Ezekiel's tomb at Al-Kifl in the 1930s: Iraqi Jews traditionally performed a pilgrimage to the shrine at Shavuot. (Photo: Israel history: a picture a day)


There is nothing extraordinary about Jews eating cheescake on Shavuot, the festival of the giving of the Torah on Mount Sinai, when Jews traditionally eat dairy foods.

But for two Jews to celebrate Shavuot by eating cheesecake together in Baghdad - well, THAT is somewhat extraordinary.

Cheesecake is not easy to come by in Baghdad. In fact Jews would traditionally eat Muhallabeya, a sort of pudding, on Shavuot. But  a western Jewish journalist - let's call him Peter -  bought the cheesecake from a western-style konditorei in Iraq's capital city. He shared it with K, one of the last six Jews in Baghdad.

Together they recited the Hebrew blessings. K could read Hebrew - quite a feat, considering she would have received no formal Jewish education.

K is one of the younger Jews remaining in Iraq, and works as a dentist in a Christian clinic. The question puzzling Peter - and indeed most people outside Iraq - is  why doesn't K leave?

K's story is particularly tragic: she married one of the last eligible Jews in Baghdad, a jeweller, in 2005. The ceremony was performed in Jordan by a rabbi imported from Belgium. The couple then made a  fatal mistake: they returned to Iraq. A few weeks later, K's husband was abducted - not necessarily because he was Jewish - and has not been seen since.

The futile search for information about her husband has cast a terrible shadow over K's life, but she is as determined as ever not to leave Baghdad. The other Jews in Baghdad are a very elderly woman, an ex-accountant, his nephew, his neighbour, and a doctor.

So why  does K stay in Baghdad? Her brothers live in Holland. Her prospects of marrying again - and having children - are receding fast. She told Peter that she has a good job, and is well-respected in the clinic. Why would she leave?

K is destined to be one of the very last members of the 2,700-year-old Jewish community to die in Baghdad. Let's hope there will be someone around to give her a Jewish burial.

We wish K safety greetings from ur friend Wesen in Holland

Unless one is forcefully pushed out, it is very hard to decide to leave one's country of birth. We as Egyptian Jews lived through that
The first thing Italians told me was" you deserve what you got, you killed Christ!!!
So leaving the country where you in spite of everything are "at home" needs a great deal of courage
sultana