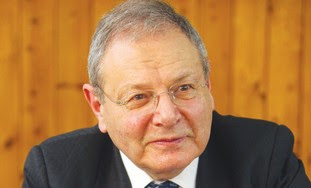 Jews from Arab countries need a seminal event like the Eichmann trial to bring their story to the fore. Otherwise, their 'narrative' will remain marginalised. Adi Schwartz reviews in Haaretz the Hebrew version*  of Sir Martin Gilbert's In Ishmael's House - curiously enough, one of very few histories of the Jews from Muslim lands in  that language. (With thanks: Yoel)

Surprisingly, almost no research books written in Israel tell in detail the history of the Jews of the Middle East and North Africa, from Muhammad to the destruction of the Jewish communities in half of the 20th century.

Whoever wants today to learn about the history of the Jewish half of the population - has to do it in English. Gilbert focuses on the details without forgetting to draw the big picture. The power of the book derives from the author's his talent to combine historical data with personal stories. The book has been often called a novel, without losing the credibility of historical research.

Gilbert occasionally pulls out a magnifying glass and describes anecdotes and individual events, and elsewhere is watching from above and draws conclusions expenses. Throughout the book, the question is whether indeed Jews and Muslims lived in harmony in Islamic countries. (...)

Gilbert (thus) refutes completely the "myth of harmony." He shows how harassed a Jewish Jerusalem in the ninth century, mentions the displacement of Yemenite Jews during the Rambam, and in the Ottoman era, he writes in conclusion that the Jews felt the "fundamental uncertainty of living under Muslim rule: the proliferation of opportunities on the one hand and on the other limitations, a combination of protection and persecution "(p. 101). Many cite the Golden Age of Spanish Jewry as an example of co - existence and prosperity of the cultural and social of the Jewish community under Muslim rule, and rightly so., but only a few know how come this era to an end. In 1066 - a wild attack was made by local Muslims against the Jewish population of Grenada, during which five thousand Jews were murdered. This number was the same, and perhaps exceeds the number of Jews killed by the Christian soldiers ... At the beginning of the First Crusade "(p. 59).

Pogroms in Jewish communities in Islamic countries have hardly had substantial Jewish historiography. For example, in the first decade of the 20th century occurred a long series of murders Jews of Morocco - the city of Taza in 1903 (40 killed), in Stat in 1907 (50 killed) and Casablanca in 1907 (30 killed).

Just for comparison, the Kishinev pogroms were a milestone in the history of Zionism and the Jewish people and occurred at the same time exactly, killed 49 Jews. In the second half of the 20th century, conditions deteriorated for the Jews in Islamic countries, mainly because of the strengthening of Arab nationalism and due to the escalating conflict between Jews and Arabs in Israel.

Jews were perceived as collaborators with the "Zionists in Palestine", if identified with Zionism or not. Jewish communities found themselves without protection, exposed to different species of disturbances. Within two decades these Jews knew layoffs, nationalization of property, denial of citizenship, freezing bank accounts, arrests, torture and deportation. Of course the worst mass murders were: Baghdad in 1941 more than 150 were killed in the Jewish pogrom at Shavuot, in Tripoli, Libya, 133 Jews were murdered in November 1945, dozens of Jews in Damascus and Aleppo Jews were murdered in riots in 1948; pogroms against the Jews of Aden in 1947 left nearly 100 dead; Dozens of Jews were killed in Cairo and Alexandria in the summer of 1948. Soon these ancient communities were destroyed and from one million Jews living in the Middle East and North Africa in the 40s there are  almost none.

What does the average high school graduate knows Israel about all this? What Israeli scholar knows the story of the Jews of Islam? In Israeli attitudes to the genocide of European Jewry, the Eichmann trial was a dramatic turning point. It caused an outpouring of survivors' testimonies into public discourse, people came to the hearings in Jerusalem in 1961, and broke the dam. In many ways, the Jews of Islamic countries are still awaiting a seminal event like this that would break the barrier of consciousness that exists in Israeli society for them.

The comparison is between the horrors themselves: Jews in the Arab countries did not suffer (fortunately) acts of persecution and murder of similar size to the Holocaust, but the silence and avoidance of engaging in testimonies recall the days before the Eichmann trial. This deletion of consciousness has many causes, most significantly related to Arab - Israeli conflict.

You could even say that the history of the Jews of Islam fell victim to the ongoing conflict. For example, the official State of Israel for years avoided mentioning the fate of the Jews of Islam for fear it will bring legitimacy and recognition of the claims of the Palestinian refugees - two groups who were forced to leave their homes since the conflict.

The thinking was was that if Israel refrained from mentioning the claims of Jews from Arab lands, it would stop the Palestinians mentioning the " right of return "; though they know their hopes would be dashed. But also the part of civil society and the intellectual and media elites in pushing the interests of Jews from Arab lands is worth noting. It is difficult to recall many stories or articles on the subject (an exception is Ben Dror Yemini in Maariv ). No prominent intellectual raises his voice in this matter.

Also a long list of Israeli Mizrahi intellectuals emerged in the last generation (such as Yossi Yonah, Yehuda Shenhav and Yossi Dahan) who  prefer to allege discrimination against the Ashkenazi establishment towards their parents 'generation, and usually do not write about what their parents' generation went through.

The history of the Jews in Islamic countries disproves a significant element in the Arab narrative of the conflict: "everything was fine"; Jews lived in peace and harmony under Islamic rule, say Palestinians. Zionism created the conflict. Knowing the facts does not allow this narrative to stick. As long as there is that widespread perception among the elite in Israel,  the discussion of history of Jews in Arab countries will be marginalised. It is hoped that Gilbert would herald the beginning of a history-based discussion - factual, not just political.

Other reviews of Sir Martin Gilbert's book
Posted by bataween at Wednesday, October 23, 2013

I will have to locate a copy. I hope this piece gets cross-posted at Harry's Place, where a lot readers harbour illusions about the lives of Spanish Jews under Muslim rule four centuries before the Inquisition.

LEVANA ZAMIR translated the book into Hebrew. It would be a good thing to ask her how to get the book.
I already have one.
sultana