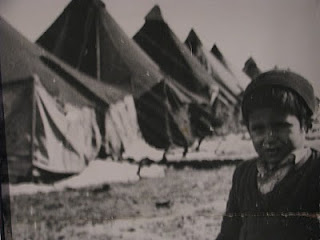 Ma'abara or tent camp for Jewish refugees in Ashkelon, 1950s

Benjamin Netanyahu's insistence that the Palestinians should recognise Israel 'as Jewish state' and a Palestinian renunciation of their refugee 'right of return' - and thus recognition that two sets of refugees exchanged places in the Middle East -  are two sides of the same coin. In her Huffington Post blog Lyn Julius argues the point with another blogger, academic Alon Ben Meir:

Even if Israel is negotiated back to the 1967 lines, will the Palestinians renounce their 'right of return'? In a previous article, Ben Meir admits that the Palestinian demand to return to Israel proper is a major stumbling block to peace.

This issue cannot be brushed aside lightly as 'rhetoric'. Not content with getting a Palestinian Arab state in the West Bank and Gaza, even the 'moderates' of the Fatah camp have refused to recognize Israel as a Jewish state. Palestinians reserve the right to turn the Jewish state into a second state of Palestine, by overwhelming it with millions of returning refugees. The first act of such a Muslim majority-state would be to repeal Israel's 'Law of Return' which entitles Jews, wherever they may be, to automatic Israeli citizenship.

A peace deal foundered in 2000 not because of Israeli security considerations, but because the Palestinians did not agree to the principle that their refugees should be repatriated to a state of Palestine. Their 'right of return' to Israel was non-negotiable.

That's why Benjamin Netanyahu is right to make Palestinian recognition of Israel as a Jewish state the quintessential issue. (PA negotiator Saeb Erekat has said flippantly that Israel can call itself what it likes - but does the Arab side accept Israel's right to call itself what it likes?) If successive Israeli governments did not insist on this point in the past, it is because Netanyahu has realized that the much vaunted 'two-state solution' leaves room for ambiguity.

As far as the refugees are concerned, the Palestinian negotiators are perceived to hold 'the moral high ground'. Even Ben Meir sees the Palestinian refugees as the main victims of an Israeli injustice. This is a serious distortion.

The Arab refugees are the unintended consequence of a war the Arabs failed to win against the nascent state of Israel in 1948. But it is forgotten that the Arab League states waged a second war - a war they won easily - on their own defenseless Jewish citizens, whom they branded 'the Jewish minority of Palestine'.

This domestic war against their Jews was not a mere backlash to Israel - it was inspired by totalitarian Arab nationalism and by the rise of Nazism. The Jews from Arab countries - now comprising half Israel's Jewish population with their descendants - were successfully 'ethnically cleansed' from the Middle East and North Africa. (Now it is the turn of other minorities.)

It is time to recognize that the single largest group of refugees created by the Arab-Israeli conflict was not Palestinian. Almost a million Jews were driven out, not just from Jerusalem and the West Bank, but Arab lands - their pre-Islamic communities destroyed. As a matter of law and justice, recognition of their plight and compensation for seized assets many times greater than Palestinian losses must also be included on the peace agenda. Although over 200,000 Jews were resettled in the West, two sets of refugees exchanged places between Israel and the Arab world.

The parties to peace must recognize that the exchange is irrevocable. Only by balancing the claims of rival sets of refugees might a deal be struck: neither set should return to their countries of origin. Both should be compensated through an international fund, as proposed by Bill Clinton in 2000.

The absorption of the Jewish refugees into Israeli society should be held up as a model for the assimilation of Palestinian refugees in their host countries. The Jews are no longer refugees, Israel having granted them full civil rights. Similarly the Arab side must take responsibility for their own refugees.

Alon Ben Meir comes up with reasonable suggestions for a humanitarian solution to the Palestinian refugee problem. Here the Arab League is central to a solution. Except in Jordan, Arab states still enforce a law they passed in the 1950s banning Palestinian refugees from becoming citizens in Arab countries. The refugees and their four million descendants need to be granted full civil rights in their host countries or in the Palestinian state. The agency perpetuating Palestinians refugee status from generation to generation, UNWRA, must be dismantled and Palestinians allowed to be absorbed in wider Arab society.

However good Ben Meir's arguments, they are a projection of his own decent values. The Palestinian leadership, in contrast, has shown a consistent inclination to thwart a humanitarian solution by cynically exploiting their people for political purposes. Currently there is no incentive for them to change.

The Arab League must be brought in to talks on the refugee issue. There must be international pressure for change - on the Palestinians. While the main UN refugee agency UNHCR should take over the activities of UNWRA, the US should condition the substantial sums it pours into the Palestinian Authority's coffers on Arab recognition of the exchange of refugee populations - and insist on two states for two peoples.

Read article in full
Posted by bataween at Wednesday, October 30, 2013