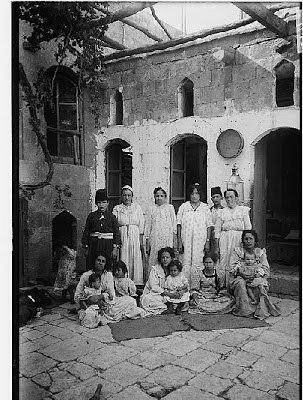 
Did you know that the Palestinian refugee problem has actually been resolved - with the tacit  agreement of Arab states to resettle them? There was an exchange of populations of Jews and Arabs as a result of the Arab-Israeli conflict, declares Saul Bartal in the Middle East Quarterly (Fall 2013). Although individual compensation is still an outstanding issue, and resettlement of Palestinian refugees is still incomplete, Bartal argues that Israel has discharged any obligations : confiscated Jewish assets have covered the cost of resettling Arab refugees many times over and only a quarter of Palestinian refugees still live in camps. A must-read article (with thanks: Michelle, Lily, Flor):

During the 1948 war, some 600,000 Palestinian Arabs fled their homes to the neighboring Arab states or to parts of mandatory Palestine occupied by Arab states (the West Bank and Gaza).[1] Likewise, within a few years after the establishment of the State of Israel, nearly all of the 850,000-strong Jewish population living in Arab states was either expelled or escaped with just their lives. Most made their way to Israel where they were resettled.
While these latter facts may not be that well known, neither are they completely unfamiliar to students of the Middle East. What is less acknowledged, however, is the de facto agreement of Arab states to resettle Palestinian refugees in their respective territories, expressed in closed-door discussions at cease-fire committee meetings and other gatherings with Israeli representatives.[2] Whether the Arab states properly represented the refugees or treated them and their descendants fairly is a matter for the Palestinians and their Arab brothers to adjudicate on their own.


Population Exchange of the 1948 War

On December 11, 1948, the U.N. General Assembly adopted resolution (3)194 whose paragraph 11 dealt with the problem of the war refugees:


The General Assembly. … Resolves that the refugees wishing to return to their homes and live at peace with their neighbors should be permitted to do so at the earliest practical date and that compensation should be paid for the property of those choosing not to return and for loss or damage to property … [and] Instructs the Conciliation Commission to facilitate the repatriation, resettlement, and economic and social rehabilitation of the refugees.[3]

As a General Assembly resolution, the U.N. decision was in no way a binding recommendation.[4] Nonetheless, it put forward the notions that Arab (and Jewish) refugees (a) should be allowed to return to their country of origin within the framework of a comprehensive peace if they could be construed as peaceable; (b) or they could receive reparations for damage to or loss of their property if they decided not to return; and (c) resettlement was a no less reasonable option.
While the Arab states vehemently opposed resolution 194 and voted unanimously against it (only in the late 1960s did they begin to transform the resolution into the linchpin of their claim to a "right of return"),[5] they did not shirk from quietly entertaining the feasibility of resettling the Palestinian refugees in their territories. Iraq, Syria,[6] Jordan,[7] and Egypt[8] all recommended the resettling of the Palestinian refugees within their borders.[9] Most of these states also demanded economic aid from Western powers as payback for agreeing to the option.[10] But their agreement was kept quiet since they did not see eye-to-eye on this matter with both the Palestinians and their own populations.

At the 1949 Lausanne Conference convened by the U.N. Conciliation Commission, Jordan, Syria, Egypt, and Lebanon appeared as one bloc to discuss an agreement that also included a solution to the refugee problem. While they had previously rejected resolution 194, they now demanded that any deal had to be resolved on that basis. They also told the U.N. Conciliation Commission that they, the Arab states, represented the Palestinian refugees. Three delegations of refugees that tried to reach the conference were treated with contempt by their Arab brethren and denied access to the discussions.[11] When they asked for an interview with the Egyptian delegation, they were unceremoniously removed by force. At a later September 1951 Conciliation Commission conference in Paris, only delegations from the Arab states were asked to represent the refugees.[12]

A critical aspect of these discussions and one that has been largely forgotten since that time was that recommendations and attempts at resettling the Palestinian Arabs also focused on issues of compensation to the Arab states for the expenses incurred in the absorption of their brethren. Alongside infusions of cash from Western sources, Arab governments viewed with equanimity the confiscation of Jewish property to help offset costs, property that was coming into their hands as a result of a massive population transfer out of their borders occurring at the same time.

Many Jewish communities in the Arab states predated the Muslim conquest of the Middle East by hundreds of years. Many of their members had grown prosperous, served in their host nations' law courts, military, and where such existed, parliaments and considered themselves full-fledged citizens. Many more eked out a livelihood as best they could, aware of a precarious situation in which today's good Muslim neighbor might turn out to be tomorrow's oppressor. Whatever their material circumstances, within a few years of the establishment of the State of Israel, the bulk of this population was forced out of their homes, leaving behind the vast majority of their possessions.[13]

Contemporary Palestinian spokesmen and advocates are largely silent about the effective population exchange carried out at that time. While they may argue that the Arab states were not empowered to represent them or claim (falsely) that Jews who emigrated did so because of Zionist manipulation rather than persecution and harassment, the fact is that part of the stipulations of U.N. resolution 194 were actualized in that compensation for relocation was obtained—albeit through the forcible divestment of Jewish citizenry—and resettlement occurred. Whether that compensation went to the proper recipients or whether resettlement was done in a half-hearted fashion, the international community, alongside the Arab governments, put in place practicable, if not perfect, solutions. A closer look at that population exchange and the accompanying transfer of billions of dollars' worth of Jewish property and holdings to the Palestinian refugees is in order.


Read article in full
Posted by bataween at Thursday, October 17, 2013

certainly we cannot compare the Pakistani and India exhange, but let me tell you that Arabs are much better at convincing others of their right(s)!They know how to excite people and use words that will convince those who do not bear Israel in their hearts (and these are numerous).
sultana