Most Israeli kids are of mixed parentage 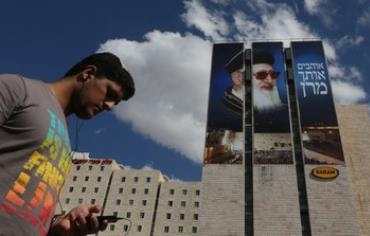 A poster of the late Rabbi Ovadia Yosef in Jerusalem


Most Israelis do not categorise themselves as Sephardi or Ashkenazi: the gap has been reduced dramatically with more Sephardim entering higher education and the workforce. The way forward lies with further integration and not with the policies of the ultra-orthodox party Shas, argues Ben Caspit in the Jerusalem Post.

So, does ethnic discrimination still exist in Israel? Of course it does.

Discrimination can still be seen in quite a few places. And yet, after 65 years, clearly the situation is dramatically different than it was in 1948.

More than half of children being born today in Israel are of mixed parentage, the product of a successful melting pot.

Take a look, for example, at how successful the Russian aliya has been.

They don’t complain, they just roll up their sleeves and get down to work.

Last week, while people were still talking heatedly about Amnon Levi’s show (a recent Israeli TV series - ed) that dealt with the ongoing problem of discrimination, a thorough and important research study prepared by Prof. Momi Dahan was published that disproves this thesis.

Over the last 15 years, the gap between Sephardic and Ashkenazic Jews in Israel has been reduced dramatically in almost all fields. A gap still exists, but it is negligible. We are pointed in the right direction and the pace is encouraging.

According to the study, most Israelis do not categorize themselves today as Sephardic or Ashkenazic.

They no longer live in a society that distinguishes between its residents in a way that Shas politicians and Amnon Levi would have us believe.

The gap in salaries between Sephardic and Ashkenazic Jews has decreased over the past 15 years from 40 percent to 25%, or 1 percentage point each year. The number of Sephardic Israelis in the top 5% rose dramatically; they are currently represented in this group in accordance with their percentage in the general population. In the bottom 5%, their numbers fell dramatically and amazingly enough, there are fewer Sephardic Israelis in the lowest percentile than their share of the population.

This important and serious research study confirms a simple reality: People who’ve clung to the mentality that Sephardic Jews still suffer discrimination have been left behind, whereas people who’ve decided to take responsibility for their own lives have advanced.

Being frank about Mizrahim
Posted by bataween at Friday, October 18, 2013

Wow! I am overwhelmed with joy and gratitude to think that with my academic credentials, languages experience and knowledge, I earn only 25% less pay and therefore less pension, that any Ashkenazi with more or less my qualifications - most often less.

I am so grateful to know that in 25 years we might become equals. That is, if we succeed in gaining access to the right (Ashkenazi) connections and therefore to equal employment.

I am looking forward to the year 2038 with impatient trepidation.

According to the study, most Israelis do not categorize themselves today as Sephardic or Ashkenazic.

Oh yes they do, although among themselves they do so by national origin.

I live in the "periphery", and neither I nor my neighbors, have any Ashkenazi acquaintances, not to mention Ashkenazi friends. In fact, the only Ashkenazim I speak with are on the Internet.

The way of life, the holidays, the synagogues, the "live and let live", the foods and customs, are Sephardi.

The chance that my neighbors' children will marry an Ashkenazi is quasi inexistent. Some of them are more likely to marry non-Jews abroad than Ashkenazis who view them and their families negatively and so that marriaage is doomeed from ther start.

Here, the mixed marriages when they occur are between Iraqis and Moroccans, Moroccans and Indians, and when they marry with "Russians" these are usually from the Kavkaz or Georgia. Also Sephardim.

Sylvia: these are statistics. Do you actually earn less than Ashkenazim employed in the same environment with the same credentials?

I am a woman living in Canada. Up until the big economic changes wrought by the free trade agreements with the US and Mexico, globalization and the recession that hit the US so badly in 2008, we earned substantially less than men. I've been employed continually throughout at a fair middle income for a college grad while most of the men I have met in my age demographic are underemployed if employed at all.

It affects men AND women. Most are underemployed or prevented from moving up. In my case, It is no longer relevant I was being sarcastic.

If we look at 2 academics, with a Ph.D, the Ashkenazi (or Israeli Arab) will have a better chance to get tenure track while the non-Ashkenazi Jew will get a job at the same University as a Zutar, meaning as Staff, with a minimum prescribed by law to degree holders. The Zutar is overworked, has no time for his research and no standing either since he is fired every summer to be re-hired in the new academic year. Meaning that instead of advancing his career he must look for a summer job, not to mention that he is paid less and has no benefits.
This is how you get the statistics of 9 out of every 10 faculty members are Ashkenazis.

In addition, here is a quasi typical case where employment is denied on the basis of origin that made headlines this summer - simply because the guy sued and he was the first one to do so. (I had similar experiences though nobody has ever called me a "ars").

I know a lot of children of mixed marriages -- I'm one, by the way -- but I've never heard of any who would not categorize himself. Maybe that's because I live in a religious/traditional environment, not in Tel Aviv...

Anonymous:
As to being underemployed:
There is in Israel a minimum, fixed pay per hour attached to each degree which employers MUST pay, and it doesn't matter if you teach a grad seminar or high school. Since the pay is the same (at least to begin) you don't have the option to ask to be underemployed with less pay - unless you lie and drop a degree from your CV - which is also hazardous.

It's amazing how this seems like a coordinated action. As soon as the Rabbi dies, a significant number of articles appear trying to convince the public that Shas is obsolete and that "education" is the only way to overcome the problems the party attacks. But they are not talking about real education, just what passes for it in the heads of our secular political elites: the mere dumping of useless facts over the students without ever helping them to learn how to think. The aim is just to keep them under ideological control until they enter the army. And when they finally leave the "educational system", as 25(!!!!) year old people, they barely remember any of the facts, just the ideology...


As Sylvia is showing, the problem is not lack of education.

Prof Dahan's findings were presented in a rather detailed article in Globes [also republished in Maqor Rishon. 11 October 2013]. It also has an interview with Prof Dahan.

Sylvia says she was being sarcastic but in order to dispel doubt, Dahan's findings about the net income gap [now at 25% according to his findings] do not apply to an income differential within a profession or occupation as such but are overall. They can be explained by Mizrahim being more often in lower paid occupations/professions.

Now, about jobs in academia, it's really nobody's business but I tell about because the issue came up. I had a research job in the social sciences at the Hebrew Univ here in Jerusalem. I was fired for political reasons at the instigation of certain "leftist" professors. I use the term "leftist" because it is a term commonly used but I do not believe that in reality there is such a thing as a "left-right" political spectrum.