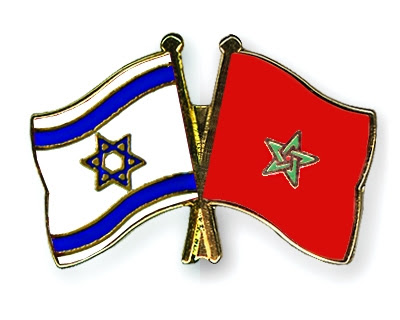 Presumably,  crossed lapel pins will become a thing of the past

A heavy fine and two years in prison could be in store for any Moroccan who attempts to 'normalise' relations with Israel.

According to Yabaladi, a Moroccan news medium, Moroccan Members of Parliament are proposing two bills to criminalise 'normalisation' with Israel.

Pan-Arabist and Islamist MPs have managed to persuade five parliamentary factions to back the two bills, which have still to be approved in Committee and by the Parliamentary plenum.

Commercial, financial, insurance and banking links with Israel would attract a fine of up to a million dhirhams and a prison sentence of between two and five years.

If the bills are passed,  Moroccans will be banned from taking part in sporting, cultural and economic 'activities' in the Jewish state, and vice-versa. Israelis would not be permitted on Moroccan soil.

So much for the reconciliatory efforts of the King of Morocco.

I have the address of a very good psychiatrist, Jewish natchurly!!!

Second most of the practices they propose to criminalize don't take place anyway.

Moroccan politicians who are behind this idea are bunch of pan-arabist idiots.

There is a saying in Arabic that my mother used to say to me about idiots (in general, or maybe she meant a specefic people):

"If you give a flower to a dockey, what would he do with it? He eats it."

Well, it won't pass whatever it was because a government reshuffle took place today.

The PJD (Benkirane's Islamist party)lost a number of seats in the process.

So either those anti-normalization deputies were trying to push a last minute proposal in anticipation of the change, or it was just a shot in the air.

Plus: there are apparently many technocrats in the new government, which means national interest and efficiency will come before blind ideology.

If they ever did their commerce would go down the hole and they know it.