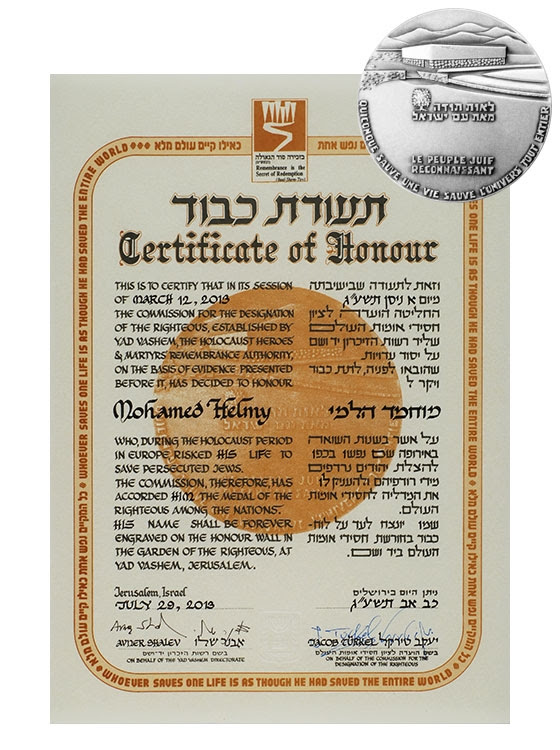 In retrospect, Yad Vashem should have seen this coming. What Arab family would want to put itself at risk by accepting an award from the Enemy for saving Jewish lives? The Times of Israel has the news:

CAIRO (AP) — A member of the family of the first Arab honored by Israel for risking his life to save Jews during the Holocaust says the family isn’t interested in the recognition.

The Egyptian doctor Mohamed Helmy was honored posthumously last month by Israel’s Holocaust memorial for hiding Jews in Berlin during the Nazis’ genocide, but a family member tracked down by The Associated Press this week in Cairo said her relatives wouldn’t accept the award, one of Israel’s most prestigious.

“If any other country offered to honor Helmy, we would have been happy with it,” Mervat Hassan, the wife of Helmy’s great-nephew, told The Associated Press during an interview at her home in Cairo this week.

Mohamed Helmy was an Egyptian doctor who lived in Berlin and hid several Jews during the Holocaust. Last month, he was honored by Israel’s Yad Vashem Museum as “Righteous Among the Nations” — the highest honor given to a non-Jew for risking great personal dangers to rescue Jews from the Nazis’ gas chambers.

Good. The hell with them.

An man/ woman who saves JEws can be my friend any time!
sultana