A fishy story from Tunisia..... 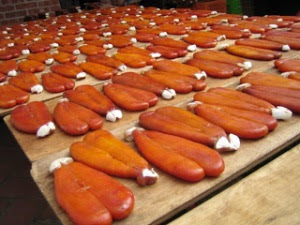 Here's news to induce indigestion in Jewish fans of bottarga, the mullet roe popular around the Mediterranean. Senguy News reports that the chief rabbinate of Djerba has withdrawn Kosher certification from Tunisian-produced bottarga.

Mullet is kosher, you ask, so how can mullet roe not be? Is this some kind of hoax? Some commenters on the Senguy site find the story fishy.  It's an April fool joke (in French, poisson d'avril), they claim.

No Jewish family meal is complete without bottarga or fig brandy (boukha).

Senguy says that the rabbinate inspected a Tunisian factory which supplies 95 percent of  the bottarga market and found a great number of 'irregularities'. The percentage of actual fish eggs in bottarga can be as low as 1 percent. Worse still, an independent laboratory tested the (non-edible wax) coating in which bottarga is wrapped and found it was made of pig's gums and trotters.

The health and safety veterinary inspectorate is on the case. The Djerba rabbinate, which immediately withdrew the Kosher certficate or Teuda from the product, was not available for comment. A fishy story indeed.

In do not like "batarekh" in Egyptian Arabic, so i do not buy it at all. And I see that it is justified!My poor dad must be turning over in his grave!
sultana

It ain't Halal either for that matter, so the companies involved in marketing the product have a lot more to worry about than loss of the kosher certification.

It's a joke! Come on, you can't recognize a joke anymore? The site is a spoof news site, much like The Onion!