Does Iraq deserve the "Jewish archive"? 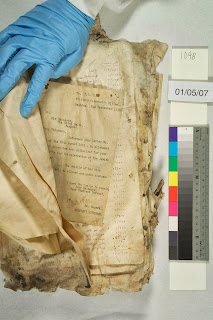 A letter sent in 1918 by the British military governor to the Chief Rabbi of Baghdad. This 'Jewish archive' document is among thousands recently restored in the US and slated for return to Iraq

Ben Cohen has a dream: in a JNS article - already re-published in the Arabic press - he wishes he could take his family to visit the National Archives Museum in Baghdad to see the 'Jewish archive'along with Iraqi schoolchildren. However, he recognises that so deep is Iraq's hatred for Jews that his dream will never be realised. My dream is more ambitious: that Iraqi schoolchildren should be allowed to see the archive in the Babylonian Heritage Center in Israel where most Iraqi Jews now live.

Reminder: If you haven't already, please sign the petition asking the US not to send the Jewish archive back to Iraq!

A few years ago, in response to a Palestinian critic who made a disparaging remark about the fact that I don't speak Arabic, I felt compelled to write an article explaining why that is the case. I said that under different circumstances, I could have been born in an Arab country and grown up speaking Arabic. My father's family had been settled in Iraq for generations, but they fled to England in 1941, the same year that Baghdad's Jews were convulsed by a June pogrom known as the farhud, presaging a much larger exodus of Iraqi Jews over the next decade.

Among my father and his relatives, there was little nostalgia for the old country, and therefore no reason, as they saw it, to ensure that their children born outside Iraq learned Arabic. It's not that they didn't appreciate the centrality of Iraq to Jewish history; this was the land where the Talmud Bavli (Babylonian Talmud) was completed, where scholarship flowed from the Jewish academies of Sura and Pumbedita (now the city of Fallujah, site of some the most brutal fighting during the war in Iraq), and where, in modern times, Jewish merchants flourished alongside Jewish writers and musicians.

Yet there were also more\nrecent memories of Iraq, uglier and sharper. The farhud, a word which Edwin Black, the author of a fine book on the  subject, translates as 'violent dispossession' cast a pall over relations between the Jews and their Muslim neighbors, and the mistrust deepened because of the support of many ordinary Arabs for Hitler's Nazi regime. During the 1950s, anti-Semitic legislation and property confiscation forced the departure of the majority of Iraq's Jews, but the small remnant who stayed were not immune from persecution. In 1969, the Ba'ath Party fascists ruling Iran executed 11 Jews on trumped-up charges of spying, transporting Iraqis from all over the country to Baghdad to watch the gruesome spectacle of a public hanging.

Since these images are seared into the minds of Iraqi Jews, it doesn't take a huge leap of the imagination to understand why the vast majority wouldn't consider returningthere even if they could, and therefore why there are vibrant Iraqi Jewish communities in cities like Tel Aviv, New York, and London, but not Baghdad or Basra. Indeed, the break with the mother country is so irreparable that Iraqi Jews are of one mind when it comes to the current controversy over whether the United States should return an archive of Iraqi Jewish treasures to the Iraqi government: it absolutely should not do so.

The archive of books, photographs, scrolls, writings and communal documents, including one item that dates back to 1568, was discovered by American troops in Baghdad in 2003, as they combed through the flooded basement in the headquarters of Saddam Hussein's much-feared secret police.

Lyn Julius, a London-based writer and advocate on behalf of Jewish communities from the Arab world, has noted that the archive was seized by Saddam's henchmen from the Bataween synagogue in Baghdad, in 1984. If the archive was stolen from its Jewish guardians at gunpoint, why on earth would the State Department, which has spent millions of dollars lovingly restoring its contents, return it to the Iraqi government? Simply because that government has suddenly decided that the archive constitutes, as one Iraqi representative put it, "part of our identity and history"? Or because the U.S. feels duty-bound to respect an agreement it made at the time to return the archive?

Julius and other advocates on behalf of Iraqi Jews make a strong case that returning the archive essentially involves restoring stolen property to those who stole it. Instead,they say, the archive should sit with its rightful owners themselves, the close-knit Iraqi Jewish communities spread around Israel and the countries of the West. On moral and legal grounds,I cannot counter this position. But here is a confession: I wish I could.

I wish I could envisage the sight of the archive on display in a Baghdad museum, much as it will be at the National Archives in Washington next month, with crowds of schoolchildren gathering to learn about the great community that lived among their great-grandparents. I wish I could organize a family trip to Iraq to see that hypothetical exhibition, safe in the knowledge that what is being shown belongs to our community, and that we are sharing it with the other ethnic and religious groups among whom we lived.

Read article in full
Posted by bataween at Monday, September 23, 2013

Email ThisBlogThis!Share to TwitterShare to FacebookShare to Pinterest
Labels: Holocaust in Arab and Muslim lands, Jewish archives, Jews of Iraq

no of course they don't deserve it. Better it should be burned than returned to them.

Trudy: The Iraqi government has let it be known that they are contesting ownership so they can sell them back to the rightful owners.

That's exactly the point: Iraq cannot be trusted to care for it or allow access of Jews to it. And this last point is quite important.

I am not opposed in principle to Jewish archives being in Arab countries.

I have been in the Jewish museum in Morocco (before it was renovated)founded by Simon Levy, and it is perfectly run, on a day-to-day basis by a team of dedicated Muslims more knowledgeable about the topic than most foreign Jewish scholars.

Most importantly, all those interested regardless of citizenship are allowed to visit in Morocco.
So it is perfectly alright to have a Jewish museum there as well as the archive.

This is not the case unfortunately for countries such as Iraq, Syria, Algeria Egypt and Libya. Perhaps someday they'll be more open to Jewish and other cultures. In a century or two.

I do not think Arabs will establish a Jewish Museum .
But now we Jews from Egypt have a museum in Tel Aviv
That is far better than having a museum in an Arab land!
sultana (a Jewish refugee from Egypt)