Recalling the heroism of Miss Judy 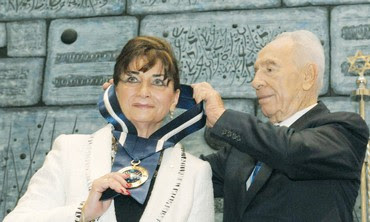 
There are many stories about the treatment of Jews in Arab lands that are not reported. Instead we are inundated with stories about Palestinians that often turn out not to be true. Diane Weber Bederman pens this much-deserved tribute to Judy Feld Carr, the Canadian housewife who rescued dozens of Syrian Jews in distress and paved the way for the exodus of the last 3, 000. There are thought to be 16 Jews or fewer still in Damascus. (With thanks: Orna)

This is the heroic story of Canadian, Judy Feld Carr, a woman of valour, who, for 28 years, quietly rescued thousands of Syrian Jews.  Her story was revealed before the age of widespread use of social media. It needs to be retold over and over. It is written up in a 1999 book by University of Toronto Prof. Harold Troper:  The Remarkable Story of One Woman’s Role in the Rescue of Syrian Jewry. It was republished in 2007 under the title: The Rescuer: The Amazing True Story of How One Woman Helped Save the Jews of Syria.
In 2011 Israel Broadcasting Authority Channel 1 made a documentary about her work titled, “Miss Judy” which was shown at the Toronto Jewish Film Festival in 2012.

Her story of bravery is another example of honouring the Jewish vow, “Never Again.”


Between 1975 and September 11, 2001, Judy Feld Carr, wife, mother, bubbie (grandma - ed), born in Montreal, raised in Sudbury Ontario and now living in Toronto, rescued 3,228 Jews out of a population of 4,500 from Syria. She and her husband, Dr. Ronald Feld, had read about twelve young Jews whose bodies had been mutilated when they’d stepped on a minefield while trying to escape from Qamishli, Syria.

Their clandestine activities began by reaching out with the offer of books for the Syrian Jewish community in 1972. Just as the two were getting more deeply involved, Ronald died from a heart attack leaving Judy alone at 33. She didn’t quit. Her first success was arranging for an elderly and sick Aleppo rabbi to come Toronto for cancer treatment in 1977.

Jews had been living in Syria since Biblical times and in Aleppo since the 4th century when the synagogue Kanisat Mutakal was built. There were more than 10,000 Jews in Aleppo for most of the Ottoman Empire. When Syria obtained her independence from France in 1946, the Jews and their property were attacked and then came the pogroms.

Prior to 1947 there were 30,000 Jews in three districts within Syria. In 1947 the Jews of Aleppo were attacked, synagogues burned and 6000 Jews fled, their property taken over by the Muslims. With the establishment of the State of Israel in 1948 the lives of the Jews in Syria deteriorated even further. Laws reminiscent of Nuremburg were established.