Now the Copts are stampeding for the exits 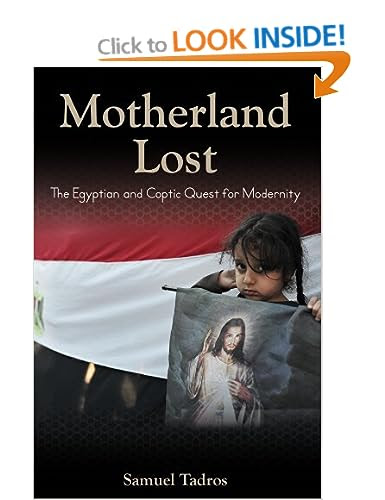 Egypt's indigenous Copts are, like the Jews before them, stampeding for the exits. This book review by Michael J Totten in the Wall St Journal of Motherland Lost by Samuel Tadros highlights the colonial power Britain's disastrous policy of favouring Sunni Muslim fanatics (just as they did by appointing as Mufti of Jerusalem Haj Amin al-Husseini in Palestine). The effect was to marginalise the Copts.

Britain invaded, reluctantly, when in 1882 a nationalist uprising threatened European interests, including the then newly built Suez Canal. British occupation would last 40 years, during which time London resolved that Egypt had to be governed by Muslims. Thus Lord Cromer, the head of its occupation, appointed only Muslims to the highest positions. "A policy favoring Muslims," Mr. Tadros writes, "would ensure the country's tranquility," since London "viewed Muslims as fanatics and had little faith in their tolerance should the British appoint Copts to higher positions." (My emphasis - ed) In 1911, more than a thousand Copts convened a conference in Asyut in central Egypt and drew up a list of demands. They wanted Sundays off work, antidiscrimination laws in the public sector, minority representation in government, equal access to education. All were denied.

Things took a turn for the worse when Gamal Abdel Nasser and his self-styled Free Officers seized power in 1952. Nasser declared Egypt an Arab country for the first time in its history, evicted Europeans, nationalized property and industry, and hitched Egypt to the Soviet Union. Nasser wasn't overtly bigoted against Christians. Even so, the Copts paid the heaviest price for his socialist policies. Confiscated land was disproportionately Christian, for instance, and almost all of it was redistributed to Muslims.

His successor, Anwar Sadat, junked socialism, aligned Cairo with Washington and signed a peace treaty with Israel, but he also sicced the Muslim Brotherhood—the Islamist organization founded by Hassan al-Banna in Egypt in 1928—on his leftist opposition. Sadat unwittingly unleashed an Islamist insurgency that triggered a wave of Christian immigration to the U.S. and Europe in the 1970s, and the Islamists have remained intermittently off their leash ever since. Where Egypt finds itself now, wedged between the theocrats of the Brotherhood and the secular authoritarians of the military, can be traced back to that fateful decision.

The author has no brief for Egypt's next ruler, Hosni Mubarak. The former president was, after all, the civilian face of a military regime that maltreated everyone. Yet there's no getting around the fact that Christians have fared even worse since Mr. Mubarak's removal, and not only because Mohammed Morsi's Muslim Brotherhood regime was both sectarian and theocratic. The army, Mr. Morsi's main opponent, also committed acts of mass violence against Copts in the aftermath of the Arab Spring. In October 2011, for instance, soldiers opened fire on Copts protesting the demolition of a church in upper Egypt, killing 23 and wounding more than 200.

Most worrisome is the dramatic upswing in anti-Christian violence by average Muslims who have often known their victims as neighbors their entire lives. Churches have been burned; Christians have been expelled from villages; and Copts have been imprisoned on charges of blaspheming Islam.

Mr. Tadros's conclusion is bleak: After two millennia, the Copts, like the Jews before them, are stampeding to the exits. "The feeling of sadness and distress," Mr. Tadros writes, "is impossible to overcome as I watch the faces of the new immigrants in my church in Virginia. A church that has withstood diverse and tremendous challenges is now threatened in its very existence."

Our regular commenter Sylvia has this advice for the Copts:

It's too late for the Jews, but Copts in Egypt should read very carefully about Jewish experience (although they already know) and prepare for that day well in advance.

They should put their property deeds and securities and liquidity documents and chattel in safe places and send copies to trusted parties abroad. Update as needed.

They should make a precise inventory of their belongings along with photographs and send abroad.

Plan well ahead of that day when someone wants to force them to sign over their property to them under the usual pretexts.

As many people as possible should record all collective properties as well in their town or villages (schools, cemeteries, churches, communal real estate, community centers, etc) with photos inside and out.

And more importantly, organize so as not to leave it up to their own Carmen Weinstein to decide what to do with it.

Golden rule: never sell your house immediately after a pogrom or a riot.
Posted by bataween at Monday, August 12, 2013

Thanks for remembering the Copts. No one else does.
God bless the Jews and the Christians.

Copts were one of the few groups allowed to raise hogs in Egypt. So when they leave, the Egyptians will be left with one less major source of protein. As they sicken and die we will stand on the side of the Nile and wave their failed state goodbye.

But Trudy, the Muslims weren't eating the pigs.
Anyhow, I feel that this book review is missing something. It seems somehow incomplete because it doesn't mention the zabalin, the Xian trash collectors of Cairo.

France24 ran a feature on the zabalin not long ago.

First and above all i am very sorry for what's happening to the Copts.
When at University I had several Coptic friends.
They were not wary enough and believed they would go on living in Egypt till the end of time. They had not understood that Egyptians wanted everyone out except Muslims.They thought it could only happen to others!!!
sultana

"Most worrisome is the dramatic upswing in anti-Christian violence by average Muslims who have often known their victims as neighbors their entire lives. Churches have been burned; Christians have been expelled from villages; and Copts have been imprisoned on charges of blaspheming Islam."

Most worrisome is the long term effect of all this on children.

It is necessary to address more often the psychological and not only the physical or material distress.

These children will carry the trauma all of their lives for, even though they might be able to put it aside and appear to get on with their lives, it never goes away and will resurface with diabolical acuity.

They might develop feelings of unworthiness,inferiority and insecurity, seeing their parents and role models humiliated and hopeless.

There is plenty more that could be said, but really the psychological angle should be sometimes addressed.

The copts are egypt's version of the native american. It hurts to see them leaving their ancestral arab-occupied homeland. A solution to their problems that is better than emigration is to destroy the arab occupation and regain their country back.

The Jews are the 'native Americans' too. Would you suggest a similar solution for them?

The jews are the 'native americans' of israel/palestine (whatever term you want to use). So as regards to israel (and judea and samaria in particular) - yes.

You actually believe that jews are also the 'native americans' of egypt???

Yes!http://en.wikipedia.org/wiki/History_of_the_Jews_in_Egypt
Although some were new arrivals from elsewhere in the Ottoman empire, the oldest community was composed of Arabic-speaking Karaites and Rabbanites.
Most of the Iraqi-Jews trace their ancestry to Babylonian times, and Jews in North Africa to the Berbers and Romans. By any definition the Jews are the 'native Americans' of the Middle East.

first of all, never rely on getting all your knowledge from wikipedia. you need other sources.

the first jews to settle in egypt, came to a country already inhabited by a people that were the ancestors of today's copts. therefore, the 'native americans' of egypt are the copts and only the copts. the same is true in iraq as regards the assyrians and kurds, and north africa as regards the berbers. in israel, jews, and only jews (musta'arabi jews and samaritans in particular) are the 'native americans'. jews may be the 'native americans' in the other middle eastern countries when compared to the arab colonizers, but when compared to the non-arab peoples under occupation, jews are historically just as much newcomers.

I'm not going to engage in a discussion with you - for me , 3,000 years old is indigenous enough vis-a-vis Arab Muslim claims.
To be pedantic the children of Israel came to a land already inhabited by Jebusites Philistines and Canaanites. Technically they originated in Iraq with Abraham. You seem to have forgotten that the Israelites had an exodus from Egypt under the leadership of Moses the Copt.

abraham may have originated in iraq and the israelites may have exited from egypt and have gone to a land already inhabited by another people, but that's what many of the ancient tribes did in the middle east. and since the canaanites have long been an extinct people, the jews are therefore indigenous to israel. the oldest EXTANT people in any given country or area is considered indigenous.

btw, if moses were alive today and he heard you call him a copt, he'd turn over in his grave.