My Jewish mother, by Urdu poet

This poignant story of a Pakistani poet who finds out his mother was a Baghdadi Jew turns tragic when his Jewish aunts refuse to divulge his mother's whereabouts. (With thanks: Michelle) 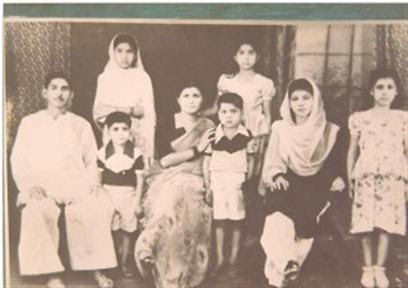 Family photo: The small child is Mahfooz Ahmad Khan and the bigger child is his brother. The lady holding the elder child is their Jewish mother, Rahmah alias Rehana, and the man on the extreme left is their father, Maqbool Ahmad Khan. The two girls in the front row are the Jewish aunts. The one seated is the elder aunt, Khatoon alias Katty. The girls in the back row are Mahfooz Ahmad Khan’s father’s sisters – Photo: Tazpit News Agency

Urdu poet and Hafiz-e-Koran (one who has memorized the entire Koran) Mahfooz Ahmad Khan “Soz Malihabadi” was absolutely ignorant of his Jewish maternal side until he received a letter, dated October 16 , 1995, from his London-based Jewish aunt one day at his modest dwelling in Kakori in Lucknow district.

“I am very happy to know from my cousin David that he could find your address,” she wrote. “I and Ghazala (younger aunt) had a very hard life when my uncles and aunt sent us to Israel in 1956. The life was hard because I was only 17 years old and Ghazala was 11. We had no one in Israel, no parents, no brothers… A person can write a tragic story about us.

“I lived in Israel from 1956 to 1965. It was a very hard country to live in at that time, though things are better now… Ghazala got married in 1964… and in 1965 I immigrated to Toronto, Canada; lived there for one year, and again immigrated to London… I tried to find your phone number from the international operator, but I was told that you are not listed in the phone book…”

Soz had grown up hearing that his mother passed away when he was very young. The next letter from his aunt, dated November 25, 1995, proved to be the catalyst that set him on the search for his mother, Rehana (nee Rahmah), of whom he discovered from the letter that she was still alive and lived in the neighboring country Pakistan.

“You asked me about your mother… She is okay. Her husband died five years ago. She had a daughter Raana, who expired in 1980; she was only 21 years old. Raana died while giving birth to her fourth child. Your mother in Karachi has three grandchildren. She had a very tragic past; we will talk about it. I do not know how she survived all the difficulties. Anyway, we have to talk about so many things…”

Born in a Baghdadi Jewish family resident in Mumbai, Rehana married a young Pashtun named Maqbool Ahmad Khan in 1947. In 1950, their second child, Mahfooz Ahmad Khan, who later came to be known as Soz Malihabadi, was born to the couple.

Soon Maqbool’s thriving business failed, reducing him to penny pinching and souring his relations with his wife, who aspired to be a film actor. In 1955 they got divorced and Rehana married a Pakistani air force officer and moved to Pakistan, leaving behind her two little sons and two orphan younger sisters in her former husband Maqbool’s custody.

In 1956, Soz Malihabadi’s young orphan aunts, Khatoon and Ghazala reached Israel under the Zionist program of Youth Aliyah emigration to Israel, aimed at the ingathering of Jewish exiles from around the world, while Soz with his father moved to his ancestral village, midway between Malihabad and Kakori in Lucknow district.

Read article in full
Posted by bataween at Friday, August 23, 2013

Email ThisBlogThis!Share to TwitterShare to FacebookShare to Pinterest
Labels: Jews of Iraq, Jews of Pakistan

How come the aunts have muslim names?

These are not Muslim names - they would have been names commonly given to girls in Iraq. Khatoon is actually a Turkish name - both my grandmothers were called Khatoon. Ghazala means 'Gazelle', I think.

Oki thank you- it's just because I thought baghdadim would usually give their children anglisized versions og jewish names;

You are right, French or English names became quite common among Baghdadi Jews in the colonial era.

I heard about a girl who was born as "Pearl" in Malaysia, and who suddenly became "Pninah" when she came on youth aliyah;

What's in a name anway
It is true rhat very often our names reveal our origin. Take mine (Sultana)I hated that name but now I sort of hang on to my Jewish Egyptian roots
sultana