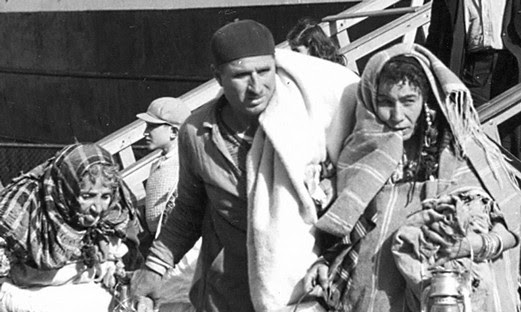 
The Jewish refugees from Arab lands are currently a hot topic for the journalist and author Noah Beck. Following a media blitz in June with his article on the Forgotten Refugees  of 1948, Noah has placed another raft of articles in the Israeli press: here's his latest piece in the Jerusalem Post. His explanation for the neglect of the Jewish refugee issue is media bias. While the Arab side have been pumping huge resources into promoting the 'Palestinian cause',  the media also reflect Israel's reticence - until recently, the refugees were 'immigrants' returning to the ancestral homeland. (With thanks: Sharon, Michelle, Lily)

In most cases, the Jewish population had lived there for millennia – long before Muslims conquered those territories. Few know this history because the Jewish refugees of 1948 were granted citizenship by the countries to which they fled, including Israel. By contrast, many Muslim countries refused to integrate the Palestinian refugees, preferring to leave them as secondclass citizens in order to maintain a domestic demographic balance and/or a political problem for Israel.

Media bias also explains why so few people know about the 1948 Jewish refugees from Muslim lands. A search for “1948 refugees” on the BBC news site generates 41 articles (going back to 1999); 40 discuss the Palestinian Arab refugees of 1948. Only three of those 40 (dated September 22, 2011, September 2, 2010, and April 15, 2004) even mention the Jewish refugees from Muslim lands, and two do so only in a single, superficial sentence that presents the issue as a claim rather than a historical fact.

A search for “1948 refugees Jews from Arab lands” on The New York Times site produces 474 results, while “1948 Palestinian Arab refugees” yields 1,740 results. Consider a comparison using Sri Lanka, another wartorn, multi-ethnic country that gained its independence from Britain in 1948. The nearly 26-year ethnic conflict there began in 1983 and claimed 80,000- 100,000 lives, many multiples of the total casualties from the nearly 100-year Israeli-Palestinian conflict.

Sri Lanka’s conflict also produced hundreds of thousands of refugees, including at least 200,000 Tamil refugees in Western Europe alone. Yet a search for “Tamil refugees” generates only 483 articles – under 5% of the 10,700 results for “Palestinian Arab refugees.” Institutionalized favoritism at the UN has also enabled the Palestinians to monopolize the refugee issue, which undoubtedly reinforces the media’s bias.