Can the palate save MidEast identity?

Tasting Iraq-Jewish food for the first time in Dubai (courtesy of Michael Rakowitz, who absorbed the recipes from his Iraqi-Jewish grandmother)  Lebanese Sophie Chamas finds it different - but not so different from the food she is used to. It sets her off on a Magdi Allam-style elegy to the Arab world's fragmented identity. But I stopped reading when Rakowitz introduces the radical Ella Shohat on to the scene, declaring: "Before we were Jews, we were Arabs". (With thanks: Niran)

Now, seated around the table at Traffic Gallery, we glance uncomfortably at the strangers sharing our table. We pass around kichree (red lentils and rice), mahasha and Amba salad (a type of mango pickle), served on vintage plates that originally belonged to members of the Iraqi-Jewish community, and which survived their exile. The flag of Palestine, once shared by the short-lived Arab Federation of Iraq and Jordan, hangs in the background, next to the Iraqi flag briefly adopted after the revolution led by Abdul Karim Qassim in 1958, which ended Hashemite rule and transformed the country into a republic – black, white and green, the flag displays a yellow sun at its centre representing the Kurdish minority, surrounded by a red star symbolising the country’s ancient heritage. Each of Dar Al Sulh’s seven nights were conceptualised around the seven primary tastes, and we are lucky enough to sample Rakowitz’s Iraqi interpretation of the ambiguous “umami”.

The Amba salad is waiting for us when we arrive – served in metal bowls that were smuggled out of Iraq in the 1940s and have somehow made their way into our contemporary and privileged context. Sweet and tangy, it features everything we as Lebanese associate with a salad – cucumbers, raw onions, bell peppers, and tomatoes – but with a refreshingly different, pickled edge. Similarly, eating the mahasha and kichree is like digging into a comfort food made by a friend’s mother – the fundamentals are the same but novel, unidentifiable spices tickle our tongues; we cut into a delicious stuffed onion, not typical among the vegetables we as Lebanese incorporate into mahshi; the kichree reminds us of the Egyptian staple koshari and our very own mjaddara and mdardarra, but there is something subtly distinct. We can’t figure out what it is, but it’s there, hiding beneath a bed of rice and lentils. We taste elements not potent enough to distance these dishes from our own cuisine but sufficiently palatable so as to introduce another, welcome instance of intra-cultural culinary diversity. We fail to locate the “other” in the familiar dishes presented to us and in the recognisable ritual of hospitality in which we are participating. 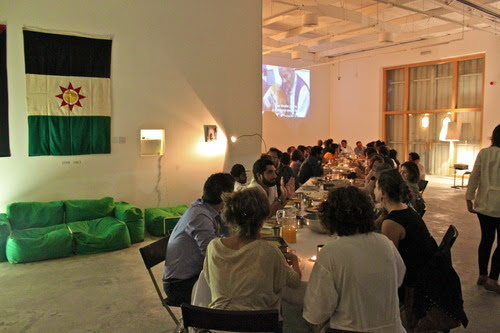 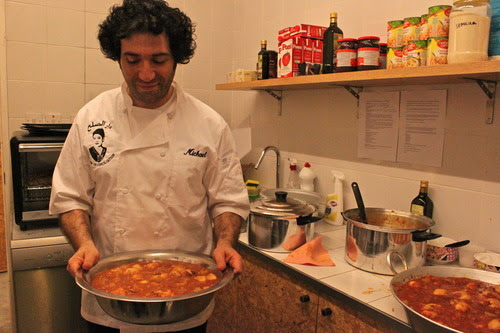 Michael Rakowitz in the kitchen. Source: I’m not a fiend.

I am relieved. I did not come here to taste difference. I came here to reclaim a morsel of the collective memories that politics and history have denied me. I came here to reconstruct the Arab, long ago butchered and broken down like an animal carcass into individual, limp parts fallaciously past off as holistic identities. I came searching for my respectively southern and northern Lebanese Muslim grandmothers in the pages of Rakowitz’s Iraqi-Jewish familial recipe book. I came seeking out the subtle variations in flavour, technique and plating that indicate not alienating foreign difference, but enriching domestic diversity. “You are eating a dying language from the plate of a ghost,” explains Rakowitz. To me, that threatened ghost is not only the Arab Jew, but the Arab in her entirety – her throat surrounded by the daggers of sectarianism, her ancestral language of “us” gradually being smothered into silence by the angry fists of many selfish regional versions of “we”.

I don’t remember the Arab Jews. The Middle East has Alzheimer’s and I have inherited it. Our past is endangered. Memories have been ethnically cleansed. As the years pass, what do we have to look forward to? Will more communities join the Arab Jews in the purgatory of hyphenated identities transformed into oxymoronic impossibilities? What will become of the Arabs, who now near extinction, overrun as they are by Sunnis, Shi’ites, Maronites, and so on and so forth? Will these categories deconstruct themselves further in their fanatical search for an unattainable purity of superior being until even our atoms are waging civil wars against one another?

Or will our palates save us? They, it seems, have not forgotten. They have been spared the amnesiac touch of nationalism(s). We can still recognise ourselves in the cuisines of those we are taught to despise. Common foods have the power to awake hibernating memories and provoke uncomfortable but necessary conversations. Arabs – all Arabs – still share a culinary sensibility, one that can fill in the cracks caused by decades of divisive, osmotic –isms. Records have been burned, borders have been redrawn, countries have been replaced, oral narratives have faded into whispers, but food is the immortal diary of dying cultures, preserving them on the brink of life until enough of their determined offspring decide to rejuvenate them.

Our meal at Dar Al Sulh is now nearing its end. As we bite into slices of juicy watermelon, “signing” – as we say in Arabic – our meal with fruit, just like we are accustomed to doing, Rakowitz kindly asks for our attention. Standing alongside him is Ella Shohat, a legend among academics specialised in the Middle East. An Iraqi-Jew like Rakowitz, she has come here to serve as his interlocutor.

Jonathan Tobin in Commentary has an article based on Garfinkel you posted below, "Confronting the end of European Jewry", but from which he has scrubbed all allusion to Jews from Muslim lands as a factor of post-Holocaust Jewish Eropean revival or even as a mere presence there.

Frankly, you can hardly tell it's the same article.

Of course, palate.
What is it with the Tobins of this world? They are as keen to scrub out Jews from Muslim lands as leftists are to scrub out their identity separate from the Arab.

It is the rule rather than the exception in Israel. They do it regularly.

It is more important to point that out to the Tobins rather than to the Guardians. Commentary is a significant Jewish resource.

o/t Here is a review of Bat Ye'or's career and her elaboration of the dhimmitude concept.

As to Jonathan Tobin, he was probably just taking from Gurfinkiel's article what was significant for his own argument in the rather brief format of the Commentary blog. I don't think that he meant to be malicious in any way or to leave out the North African Jews. Why don't you contact him off line about your concerns?

Off topic, but not really, Simcha Jacobovicci hoists Reza Aslan for insistently referring to the land of Jesus of Nazareth's birth, Judea, as Palestine, when in fact the people after which the coastal plain was named, had disappeared from the area 600 years before the Crucifixion:


Garfunkiel
Like Israelis, but unlike most American Jews, today’s European Jews are survivors, or children of survivors, either of the Holocaust or of the near-complete expulsion of Jews from Islamic countries that took place in the second half of the 20th century. ... When anti-Semitic incidents or other problems accumulate, they can’t help asking whether history is repeating itself.

Tobin in Commentary
After decades of celebrating the unexpected revival of European Jewry after the Holocaust that created new vibrant communities where desolation had existed in 1945, we have now reached the moment when the cycle of hatred has turned around again.

No, Elyahu, I think they both were trying to make the same point.